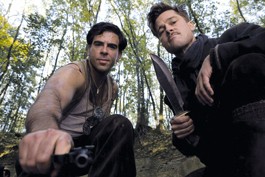 'Inglourious Basterds' takes it to the Hitler man

That Hitler—what a showman! Seems like every week there’s a new YouTube remix of Bruno Ganz having a Holstein over whatever. Quentin Tarantino’s no-doubt Oscar-winning Holocaust film Inglourious Basterds is almost as deliriously entertaining as a remixed Hitler tantrum.

This new film drips with movie love, and it’s not a cheat—the blazing finale is one of the ultimate Mad magazine “Scenes We’d Like to See.” The long, rich film showcases Tarantino’s sense of humor more than his appreciation for violence. The whole thing is held together by one boundless, if undifferentiated, appetite for paraphrasing movies.

Inglourious Basterds is the should-have-been true story of Operation Kino, the plot to destroy the Hitler gang through their own love for cinema. Participants in the top-secret plot, witting or otherwise, include sweetheart of the Reich Bridget von Hammersmark (Diane Kruger, never better), a mysterious Parisian movie-theater owner known as Emanuelle Mimieux but born Shosanna Dreyfus (Melanie Laurent) and a drawling British film critic turned commando, Lt. Archie Hicox (Michael Fassbender), the author of Twenty-Four Frame Da Vinci, a study of G. W. Pabst. Opposing these flawed heroes is the smiling-serpent villain Christoph Waltz as Hans “the Jew Hunter” Landa. Waltz’s thrilling loathsomeness is as pure as something you might see in a silent film.

The loose cannons knocking around this picture, turning up to cause mayhem during its five separate chapters, are the Basterds themselves. Brad Pitt’s Tennessee ridge-runner Lt. Aldo Raine leads a band of homicidal Jewish guerrillas. Each one is indebted to him for 100 Nazi scalps. More than ever, Tarantino shows a penchant for conversation over violence, for delicious anticipation rather than delivery.

Inglorious Basterds is a genuine art movie, right down to its subtitles and crimson and gold surfaces. Nothing is as rapt here as Tarantino’s swoon over a beautiful girl on a ladder, leaning on a block-wide, blazing theater marquee, polishing the letters spelling out the name of Henri-Georges Clouzot. Le Corbeau is showing during its first run.

The lady is distracted from her marquee work by the attention of a persistent, baby-faced German officer, Fredrick Zoller (Daniel Brühl). Tentative romance and repulsion between the theater owner and the sniper continue to the film’s end.

Tarantino gloms on to all of our movie fantasies of the Satanic ornateness of the Third Reich. The evil is beautifully saturated and looks an inch thick. Even a standard poodle, belonging to Goebbels’ girlfriend, looks like it ought to be tried at Nuremberg. As the Basterds continue their outrages, Hitler foams in his lair, vowing reprisals and revenge: “Nein! Nein! I will hang them by their heels from the Eiffel Tower!”

Here in cinema form is an essay about Tarantino’s mutual fascination with and distaste for the war film. And even if he’s a voracious film watcher, he can tell the difference between the passionate but low-budget Samuel Fuller dramas of universal dehumanization and the boring-ass patriotic gore-opera represented by Zoller’s film Nation’s Pride, with its cascades of bullet shells and a beatific youthful sniper in his church tower. Wonder what Tarantino thinks of Michael Bay? In its depictions of the Nazi’s near-orgasmic reaction to the premiere of Nation’s Pride, this movie gives you a good guess.

Moreover, there seems to be some commentary here, disguised as strawberry-jam-covered strudel. The revival of World War II in movies and documentaries in the mid-1990s coincided with the Hitlerizing of Saddam—one Good War deserves another. When Bush ginned up the war on terror, his opponents were slurred as Chamberlainian sissies, sleepwalking toward a new Munich. Pumping up and satirizing the war movies that fueled so many daydreams of righteousness—that is subversiveness itself.

Tarantino’s ambiguity keeps this from being complete idiot-fodder. When the insane Raine works on his grisly signature—a bit of body manipulation with a Bowie knife—there’s a shudder discernible in the way Tarantino watches it. Remember the camera that turned away from the ear-cutting in Reservoir Dogs? The blank satisfied look Pitt’s Raine fills the screen in a final shot; Tarantino’s gaze isn’t quite as dispassionate. It’s not easy to get the high ground and take the low road at the same time, but Tarantino does it here.