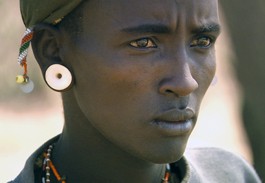 Anyone who just blew $10 on Harry Potter noticed that movie ticket prices have risen yet again. Add a bag of overly salty popcorn, maybe an Icee and a trove of tropical Skittles to the magical experience, and all of a sudden it’s looking like there’s no gas money for this week. Thankfully, there are a few loopholes for those who can’t get enough of the action, drama and sheer thrill of the movie world: North Bay film fests. For the price of one big-budget Hollywood wallet-drainer, movie buffs can catch a handful of worthwhile up-and-coming independent films as well as the chance to chat with some of the directors.

Aug. 21 welcomes the first annual Sausalito Film Festival, a screening of a whopping 30 films in three days, featuring full-length films, shorts, animation and documentaries from all over the globe. The films have been divided into five separate categories from “The Art of Rebellion” to “Advanced Global Citizenship” (as with Milking the Rhino, above) to “The Human Condition” in an effort to capture the intellectual and provocative makeup of Sausalito. Films include the anticipated No Impact Man, which follows a New York family as they attempt to become entirely independent from processed products and consumerism and live a 100 percent sustainable life, and Lean on Me, a tribute to director John Alvidsen featuring Morgan Freeman.

Farther north on Highway 101, directors from Poland, Germany, Australia, Canada and the States are making the trek to the Mystic Theatre for the first annual Petaluma Film Fest, one day of award-winning short film bliss. The night inaugurates the 2009&–’10 season of the Petaluma Film Alliance, with 32 film events happening throughout the fall and a weekly Cinema Series starting in September.

“We decided to begin with a showcase of short films because it offers a little something for everyone in a single evening,” says Michael Traina, SRJC film and media studies instructor and the brains behind the operation. To make it an even better deal, several downtown Petaluma restaurants are offering “Dine and Donate” specials for those attending the festival. Now that’s a lot better than an overpriced bag of greasy popcorn—even with Skittles—isn’t it?