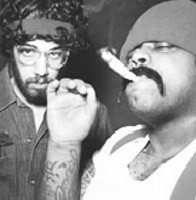 Not too long ago, I showed up at a barbecue that boasted plenty of food, a cold keg of Sierra Nevada, a beautiful evening with no mosquitoes and a spacious backyard. Unfortunately, like the girl who ruins a perfectly attractive outfit with one of those stupid cropped sweaters, the host had chosen for his barbecue’s soundtrack one solitary CD, played incessantly into the night on endless repeat: Steve Miller’s Greatest Hits.

If you’re throwing a happening soiree and you’re celebrating the freedom of summertime and you want people to feel alive, you shouldn’t treat them to a 1976 class reunion. With barbecue season officially here, here’s a primer for the backyard stereo, a list of upbeat new releases with just enough familiar styles to keep everyone happy. Go ahead and crawl under the blankets to Sufjan Stevens when winter comes back around, but during the next few months, be sure to check out some of these quintessential backyard barbecue albums from 2006.

Gnarls Barkley, ‘St. Elsewhere’ Modern soul meets glitch-and-paste production in an album so universal it should be called St. Everywhere. Cee-Lo has channeled the anguished Marvin Gaye here, desperately piecing together mysteries of love and concepts of reality. Underneath his soulful plea is Danger Mouse’s one-man block party, aiding with sleek horn riffs and explosive, driving street beats, unique and hotter than mesquite.

Gotan Project, ‘Lunatico’ A sultry and cosmopolitan hybrid of classic tango and nouveau electronic music, a crossbreed of Astor Piazzolla and Thievery Corporation, guaranteed to transport guests to a cooler, sexier place. Recorded in Paris and Buenos Aries, Lunatico drips with flavor, featuring Argentinean vocalists, French MCs and Tucson, Arizona’s own Calexico. This is the stuff that Putumayo only wishes it could put out.

People Under the Stairs, ‘Stepfather’ The ultimate outdoor patio hip-hop album begins by asking, “We’d like to know out there / Can you feel it / Like I feel it?” and boasts a solid 80 percent majority of hook-laden funk songs that are actually about partying. Updating CTI-era jazz grooves into the 21st century, Stepfather is full of helpful barbecue reminders, such as the timeless, “Pass the 40 / ‘Cause your momma ain’t lookin’.”

Slackers, ‘Peculiar’ The greatest ska album in over 10 years, hands down, and a throwback to meaningful songwriting in a distilled and overly goofy fifth-wave genre. Full of sing-along choruses and elastic rhythms, Peculiar is a party-duping Trojan Horse; nearly all of the songs decry government propaganda and dishonest war criminals underneath a positive, determined air of hope and a classic Studio One style.

Boris, ‘Pink’ An in-the-red effort from this Japanese sludge-rock power trio, full of heavy, psyche-drenched riffs tuned low and unbridled energy cranked high. Not for every barbecue, naturally, but if your guests are hammering down Pabst Blue Ribbon, and the grill isn’t the only thing that’s smokin’, and if you’re played out on Nirvana and Queens of the Stone Age, Boris offer the neighborhood a whole new definition of heavy.

James Hunter, ‘People Gonna Talk’ Van Morrison loves this guy, and it’s easy to see why; People Gonna Talk takes all the classic R&B singles Morrison grew up listening to, studies their every move and replicates them with jaw-dropping precision. Fun party trick: Put this on and ask people to guess who they’re listening to. Then pull back the curtain; it’s not Sam Cooke, just a current, average-looking British guy.

The Gossip, ‘Standing in the Way of Control’ With a Bikini Kill aesthetic smothered in hot sauce by Jr. Walker and the All-Stars, this is a tension-release, hypersexual rock goddess on a one-way mission to the get-down lounge, sizzling alongside those vegan tofu kebabs your friend brought over. A rambunctious shot of indie soul, begging you to stay for just one more beer, right before the sun goes down and the coals burn out.

The Black Keys, ‘Chulahoma’ A quick six songs written by the late, great, blues guitarist and songwriter Junior Kimbrough, who owned his own barbecue juke joint in Mississippi before his death in 2000. This is the low, grizzled sound of Kimbrough’s spirit, and the able-bodied Black Keys unreel his songs with all the greasy, sweaty abandon of a hot summer night. Dirt and gravel never tasted so good.