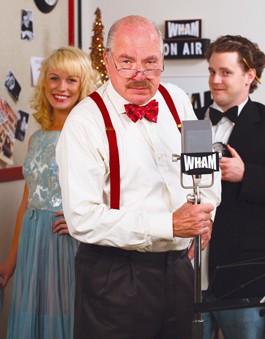 It’s an old theatrical conceit, the anticipated arrival of someone who may or may not ever arrive,” says Shad Willingham, director, author and star of Sixth Street Playhouse’s new comedy Ham for the Holidays. “Playwrights love writing about people who never show up,” he says. “I, personally, have always loved stories about normal people faced with extraordinary circumstances. So when I started writing this play, I decided I would have normal, everyday radio actors, waiting around on Christmas Eve for Orson Welles to appear.”

“He’s the definitive radio icon,” Willingham says. “With War of the Worlds, he proved you can reach and affect people deeply with the radio. Plus, he was a bit of a pompous ass.”

For Willingham, a teacher of drama at Tulane University in New Orleans, and a former company member at the Oregon Shakespeare Festival, this production is momentous in many ways. A graduate of Santa Rosa High School, Willingham was a cofounder of the Sonoma County Repertory Theatre. Last year, he dressed in drag for Sixth Street’s Leading Ladies, and now makes his Sixth Street directorial debut with Ham, which is having its world premier in the Studio Theater.

The play, which opened last weekend, evolved from a 20-minute sketch Willingham wrote two decades ago while attending the North Carolina School of the Arts. Called Dead Air, the experimental piece, which had no mention of Orson Welles, featured four characters, all 1930s-era radio actors, performing Lucile Fletcher’s Hitchhiker.

“The sketch was all about watching these four terrible actors trying to get through this story,” Willingham says. “That sketch was written over a 14-day period when we were all assigned the task of creating something—a fight scene, some Shakespeare, a monologue, whatever. We were given two weeks, and then came back together to perform our pieces for each other. That assignment was an annual thing, and in the four years I was there, ours was the only original script. The greatest compliment we got was when one of our instructors said to us, ‘Unlike most of the other presentations, I can tell what you’ve been doing for the last two weeks.'”

Willingham is taking a few minutes off from rehearsing to talk about the production, hanging out in the theater lobby, where he is eventually joined by actor Norman P. Hall, as fellow cast members Dodds Delzell and Christmas Collins run lines nearby.

“I love radio,” says Willingham, who plays the part of Dexter Armstrong, the fledgling writer whose play the radio company ends up doing. “I love the romantic aspects of classic radio. When I was growing up, one of my biggest aspirations was to become a DJ. I wanted to be a DJ so bad, spinning Billy Joel records, sending my voice out to hundreds of thousands of listeners.”

“I think that’s an American thing, wanting to be a DJ,” says Hall, 72, who plays the part of an old, narcoleptic Shakespearean actor recruited to step in for the absent Orson Welles. Hall’s character is chosen partly for his previous acting experiences, but mainly because he lives in the rundown trailer right behind the radio station. “My parents were European, so they had little interest in the radio, except as a source of information. For me radio was all about the serials—Tom Mix, The Shadow, The Lone Ranger. Boxing, also, was really big on the radio when I was growing up. So when I imagined being a part of the radio world, it was always as an actor.”

Playing Dick McCann in Ham has been especially fun, Hall says, because he can enjoy the attitude of the character, a guy so confident in his own classical training that he keeps insisting he doesn’t need a microphone to be heard—even though he’s performing in a radio show.

“He’s hilarious and very well written,” Hall says. “And I’m not just saying that because I’m sitting across the playwright.”

“Of course you are,” Willingham laughs.

“Well, I’m not only saying it because I’m sitting across from the director,” Hall retorts. “This is a very funny play.”

“With any luck,” Willingham says, “this play will become one of those shows that can be brought back year after year, as an alternative to shows like A Christmas Carol. I almost titled this one Not a Christmas Carol just to make it clear that this is a definite departure from the Christmas norm.”