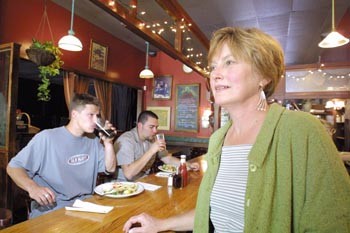 “I WAS A GUEST on the Jerry Springer Show today,” boasts this guy in a battered denim hat, a Love Sucks T-shirt, and a gold hoop through his nose, leaning tipsily across the old wooden and etched-glass bar in Santa Rosa’s Ma Stokeld’s Old Vic pub. “I swear to God I was on Jerry Springer!”

Whether his revelation is true makes no difference–a customer buys him a pint.

Meanwhile, a jazz quintet blares from the adjoining room. The live music, which features some mean trombone playing, is like the atmosphere here, a little jumpy, a little raw, and little unkempt.

We’re attempting to stay upright on what has to be the most uncomfortable restaurant seat in the North Bay. A leather sofa that looks like the ultimate cushy people-watching nook, until you sit down and the beast sends waves of broken springs painfully under your backside.

The well-worn pub is a longtime community hangout and watering hole. On a Wednesday night after the downtown Santa Rosa farmers’ market, the place is hopping with a mostly young, jeans-clad crowd, as a couple of admirable servers rush back and forth across the scuffed yellow floor. On Saturdays there’s a dinner theater, costing $24 for a three-course meal and a good giggle.

The pub has two areas: one a sort of narrow walkway with a few wooden chairs and tables flanked by the big old bar where a row of beer drinkers sit cradled on their barstools; the other a darkened dining room with the stage, a green carpet, and carnations on the tables. The decor runs to such curiosities as an old poster of Winston Churchill declaring, “We shall go forward together!”

I soothe a dry throat with a half pint of cool Bass Ale ($2 a half-pint, $3.50 a pint), selected from an impressive list of 17 lagers, ales, stouts, and cider that includes Boddington’s Pub Ale, Fuller’s London Pride, Murphy’s Irish Stout, and Newcastle Brown Ale. There’s also a small, but varied and inexpensive wine list.

The food is British pub-grub style, with fish and chips, steak pie (where are the kidneys?), and bangers and mash. A daily soup ($3.35 a cup, $4.45 a bowl) is thick and lusty with puréed tomatoes and basil.

The garlic fries ($4) make great beer buddies: a plateful of these crisp spuds–unskinned, cut medium thick, and bathed in pungent garlic butter, with a couple of fat garlic cloves visible–is heavy on the stomach and downright sinful.

The Ploughman’s Lunch ($6) seems to have a Sonoma County spin rather than being the traditional British standby. The Huntman’s Cheese mentioned on the menu is a hefty slice of Cheddar interspersed with Stilton. It comes with Sonoma greens, a pickle from a jar (rather than the pickled onions mentioned on the menu), bread, and (horrors!) two big strawberries. In the England I grew up in, no self-respecting ploughman would replace his tart green apple with sweet strawberries.

The roast chicken pastry ($7.50) is a disappointment. Although the pastry (which is heavy rather then puffy) contains large moist pieces of roast chicken, plus peas and carrots, it is really overseasoned, the sweet taste of fresh tarragon in the dish being almost overpowering.

The shepherd’s pie ($8), with sautéed spicy ground beef topped with fluffy mashed potatoes, which in turn are topped with melted Cheddar cheese and fresh green beans, is very good. Great British comfort food. But I would hold the shiny orange cheese and pop the dish under the grill to make the potatoes golden and crunchy on the top instead. The dish comes with a choice of chips, cole slaw, green salad, or that British delicacy–mushy peas.

Today’s dessert is strawberry-blueberry crisp ($4.25) with whole blueberries, thick slices of strawberries, and not much crisp. It comes with vanilla ice cream.

Entertaining and inexpensive is how we sum up the evening, although not perhaps as inexpensive as for the Jerry Springer guy–as we leave, someone is handing him a package containing a free pie.