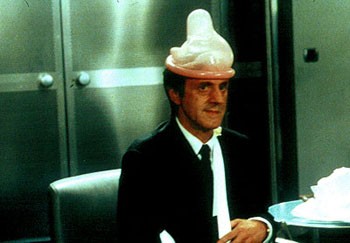 ‘The Closet’ is a French sex comedy that’s actually funny

IT SOUNDS like the plot you never wanted to see again. The Closet concerns a reticent straight man posing as a homosexual to save his job. One can laugh at just about any kind of movie, but there’s no substitute for the satisfaction delivered by a brisk, well-built farce, and The Closet, for a change, is one.

Daniel Auteuil, that outstanding emoter of existential despair, plays François Pignon, a despised little accountant so boring that his wife and his son both abandoned him. He’s learned that he’s going to be fired from the condom company where he works.

Terminating Pignon is a pleasure to the human-resources manager, Santini (Gérard Depardieu), who has never forgiven the man for his poor performance on the company’s lunchtime rugby team. Facing suicide, the accountant is rescued by a grumpy but benign next-door neighbor (Michel Aumont), a gay retired psychologist. He decides to mail Pignon’s boss Photoshop-fabricated pictures of Pignon in leathers, kissing another man. Since the condom company has a number of gay clients, it is terrified that firing Pignon will look like sexual discrimination.

Being seen as a gay man makes the meek Pignon a kind of star. Those who previously ignored him now feel there’s something sinfully fascinating about him. In an American movie, Pignon would overreach himself, but this French import makes Pignon’s special privileges a clear case of retroactive justice.

Director Francis Veber (the original La Cage aux Folles) passes up some good opportunities for Jacques Tati-style wit at the company’s garish modern headquarters. Still, Veber keeps the tale crisp enough that there’s room for the occasional discursion, as in a scene of a couple of lummoxes discussing the plot (uncredited) of the 1991 Volker Schlöndorff movie Voyager. (What really moved them to tears was Julie Delpy’s cleavage.) Auteuil’s hangdog defeatism works as well for comedy as it has many times for drama; seeing this actor, born to demonstrate the bitter side of life, trying to smile ingratiatingly at his boss is funny in itself.

Depardieu, apparently neckless, and stuffed into a business suit as tight as the skin on a sausage, gives the best caricature this year of a burly pédé-[fag-]hating macho bastard. Michele Garcia has just the right amount of time onscreen as the jealous Mrs. Santini, a martyr’s martyr.

But best of all–because the tradition of elegant comediennes is nearly dead–is Michele Laroque as Pignon’s boss Mlle. Bernard. She’s the first to see through Pignon’s pose and the first to act on the knowledge. Laroque, who has the swank of Simone Signoret and the weary slyness of Chico Marx, is one eloquent argument for heterosexuality.

‘The Closet’ opens Friday, Aug. 3, at Rialto Cinemas Lakeside in Santa Rosa and at Sebastopol Cinemas in Sebastopol. For details, see .