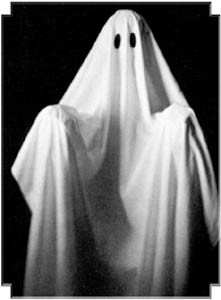 Where to find the free spirit(s) of the North Bay

THE TRUTH, as they say, is out there. It’s also right here–in our very own North Bay backyards, on our streets, in our houses. Have you noticed anything bumping in the night lately? Heard any strange sounds or voices? Felt any eerie vibrations as you window shopped, washed the dishes, walked the dog?

Well, if you have, don’t worry. It may just be your new dead neighbors.

Consider these facts: According to data released by the U.S. Census Bureau, the number of new arrivals in Marine, Sonoma, and Napa counties has risen dramatically since 1990, with populations in each county increasing by 7.5 percent, 12.2 percent, and 18.1 percent, respectively. Of course, these numbers refer only to the number of people now living in the North Bay. Figures on the number of dead people currently residing here are not quite so easy to calculate. But it stands to reason that if living-and-breathing people like being here, then dead folks might enjoy it as well.

This, perhaps, is why paranormal experts have detected a growing number of spirits throughout the North Bay. Victoria Bullis, a professional spiritualist and ghost counselor from Berkeley, determined years ago that the North Bay ghost populations were rising–particularly in Sonoma County, which proves consistent with the demographics for living people.

“What the living appreciate, the dead appreciate as well,” Bullis affirms. Like many of us, it seems, what a ghost is looking for in a home is location, location, location. “Ghosts are coming in from all over,” she says. “It’s a regular ghost carnival around here.” The newcomers, she says, are as likely to be hanging out in your car or near your office desk as they are to be camped out in your attic. They wander around. They visit one another. They hitchhike. They go sightseeing. They people-watch.

They enjoy their surroundings, perhaps even more than we do.

For those interested in making the acquaintance of these ethereal neighbors, the best bet is to hook up with veteran Petaluma newspaperman Bill Soberanes at one of his Halloween seances at the Phoenix Theatre or visit one of the established, old-time haunts, where the ghosts are all settled in a ready to entertain. To help you, here are four of the North Bay’s best-known haunted locations:

For years, beachcombing visitors at Marin’s Muir Beach have reported an old woman in a flowing white dress, walking with a black dog, who paddles along the surf before vanishing among the rocks. She usually appears in the early to late mornings, on foggy days.

The Cavanagh Inn in downtown Petaluma features a lovely Victorian house, with lovely Victorian furnishings–and the lovely Victorian spirit of one Adelaide Cavanagh, who tends to flirt with male guests and dance loudly across the wooden floor, and likes to open and shut the closet in the Magnolia Room.

It used to be a women’s prison, and some of those women never left. Now it’s the home of Bartholomew Park Winery in Sonoma. The one-time penitentiary is a popular tourist spot and the home of several mysterious hymn-singing ghosts whose disembodied voices are often heard, sweetly harmonizing through the echoey halls.

Wineries, evidently, are as popular among ghosts as they are among the living. Geyser Peak Winery in Geyserville boasts a resident prankster named Rosie, a nocturnal who flits through the winery’s office building, flushing toilets and flipping on lights late at night. Reportedly, many employees avoid working past dark, which surely makes Rosie light up with mischievous glee.–D.T.