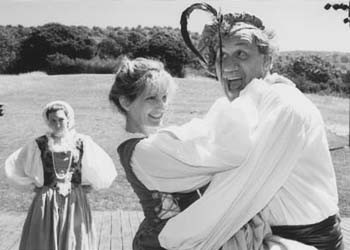 A PESTILENT GALL to me!” Shakespeare’s King Lear barks when his pugnacious fool recites a particularly ribald aphorism–a devilish number comparing truth to a stinking dog. Similar vitriol would surely bellow forth from the dysfunctional patriarch today were he to attend the new Shakespeare on the Fringe Festival operating under the aegis of the Sonoma Valley Shakespeare Festival.

Lear’s line would be an appropriate retort to the newborn endeavor–the fringe festival is envisioned as an irreverent, annual send-up of the Bard in the mode of its inaugural show, No Holds Bard, or Shakespeare’s Maximum Insults scribed by SVSF artistic director Carl Hamilton.

An original comedy depicting four actors (and a fool) enamored with the Bard’s bombastic and incendiary verbal affronts, Hamilton’s work is a loose play-within-a-play that features actors merrily firing off volleys of Shakespeare’s declamatory derisions when properly provoked. Never one to forgo an obscure pop-culture reference, the playwright named his characters after the ’60s wife-swapping flick Bob & Ted & Carol & Alice.

“With the Shakespeare Festival I always try to do one non-Shakespeare show,” explains Hamilton, a longtime iconoclast of local theater. “Last year I did the Complete Works of Shakespeare Abridged from the Reduced Shakespeare Company. It’s kind of a fringy show, and it went over really well–it was a major hit for us. I had been acquainting myself with the fringe festivals out there and I got this idea to create one that kind of takes Shakespeare’s works, deconstructs them, and makes fun of them.”

Hamilton’s inspiration for No Holds Bard came when his mind was drifting during a class at the University of California at Davis, where he studied theater directing.

“I was in graduate school in one of those required classes–a theater history class–and I was utterly bored,” Hamilton recalls. “I had this book with me called Shakespeare’s Insults: Educating Your Wit [compiled by Wayne F. Hill and Cynthia J. Ottchen]. So, I was just sitting there, looking through it, thinking, ‘How could I turn some of these into scenes?'”

Hamilton’s initial undertaking–titled Shakespeare’s Insults and Other Tidbits–premiered at Rohnert Park’s Spreckels Performing Arts Center in 1995. Three years and some rewriting later, the show has evolved into the present insult-fest, which promises to be a tour de force of putdowns.

“People really enjoy the insults part–the words are so flowery and poetic,” Hamilton says wryly. Indeed, in a society where road-rage drivers find the handgun in the glove box more poignant than the proverbial “finger,” boning up on some flowery and poetic insults could well prove socially progressive.

Hamilton offers a preview: “There’s one insult that really grosses people out–‘Your virginity breeds mites much like cheese,’ or something like that.”

He then adds with relish: “Eat my leek! You crusty batch of nature!”

So why distill Shakespeare’s oeuvre down to a linguistic barbecue of scorn? In part, suggests Hamilton, to liberate the Bard from the confines of academia’s ivory tower.

“I think that the general populace sort of looks at Shakespeare, but the critics and the intellectuals have made it so snooty,” Hamilton says. “The people who really understand Shakespeare realize that he wrote for the middle class, common folk, and that it was just entertainment–sitcoms for the Renaissance period.”

So A Midsummer’s Night Dream was really just an Elizabethan Seinfeld? History suggests this may have been the case.

“I’m one of those people who enjoys making fun, not of Shakespeare, but of the people who take him and make him so lofty,” Hamilton says. “The whole idea of the fringe is that it really gives people the opportunity to sit back and laugh at him.

“With the fringe element we can just play, we have all the license to do it, and people have a really good time.”

Hamilton has already received over a dozen submissions from playwrights interested in participating in future Shakespeare on the Fringe Festivals. Among these is a timely farce that pits Shakespeare’s famously depressed Dane against a ne’er-do-well reptile from the phylum sci-fi–Hamlet Meets Godzilla.

Of his own venture into the fringe, Hamilton says modestly, “It’s really nothing serious–it’s just bubble gum.”

But a grand oral exercise just the same, thou lumpish folly-fallen canker-blossom!

The Music of Harry Chapin