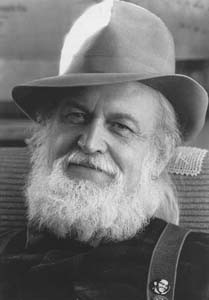 HE WASN’T BORN THERE, but Bruce “Utah” Phillips has chosen to be known professionally for the state in which he came of age, a wide-open slice of the West he continues to regard as his home. It was there he developed the leftist political perspective that shaped his subsequent activities as a labor organizer, political gadfly, and, most enduringly, folk singer.

While Salt Lake City in the 1950s may seem like an improbable place for such an outlook to take shape, it was a natural outgrowth of his upbringing. “My mother worked for the CIO [labor organization]. She was a radical, a red. And my father was a communist,” the 63-year old Phillips recalls in a phone conversation from his Nevada City home.

“For instance, when I joined the Army and went over to Korea, I had the tools to understand cultural imperialism when I was lookin’ at it, and most of the people around me didn’t. So I spent a lot of time trying to explain it.”

That radical bent still is evidenced in his music– including a 1997 duet album with radical feminist folkie Ani DiFranco–and in Phillips’ repeated candidacies for the U.S. Senate and presidential campaigns. He brings his politico-folk tunes to the Kate Wolf Memorial Music Festival June 27-28 in Sebastopol at a star-studded tribute to the late Marin singer and songwriter. He also appears–along with Emmylou Harris, Kathy Mattea, Dave Alvin, and others–on Treasures Left Behind, Remembering Kate Wolf (Red House), a new tribute CD.

THOSE RADICAL ROOTS run deep. Returning to Utah after his tour of duty, Phillips rejoined the Industrial Workers of the World and plunged into labor activism and organizing. “I organized for the Utah Migrant Council and in a barrio in west Ogden and for the Poor People’s Party.” And even though Utah is hardly a hotbed of union strength–this was the state that executed labor organizer Joe Hill back in 1915, he points out –“I got along pretty well because I decided early on that the LDS [Latter Day Saints] people weren’t my enemies.

“The good thing about being a radical in Utah,” he continues, “is that the Mormons–who own the state–are dead-honest people. They’re wrong, but they’re honest. They play by the rules. They make up dumb rules, like anybody else, but they play by them. You can predict any response to a given provocation. I found out when I went east what corruption really is. They make up the rules–same dumb rules–and if you figure out how to beat ’em, they change ’em. So it’s much more fluid, much trickier.”

PHILLIPS HAS RECORDED infrequently over the past 30 years, but has seen dozens of his songs recorded by other artists, from long-time cohort Rosalie Sorrels to Kate Breslin and Jody Stecher’s 1997, Grammy- nominated Heart Songs.

It was through a Sorrels’ recording of Phillips’ “If I Could Be the Rain” that Phillips came to the attention of a young Kate Wolf. “She told me she listened to that record and said, ‘If he can do that, then I can,’ and she started writing songs,” says Phillips, who met Wolf when she invited him to an early Santa Rosa Folk Festival.

A generation apart in age, they were kindred spirits musically, and soon afterward began to tour together regularly. “I had started out singing in the east after I left Utah in ’69, and the audiences were pretty well developed,” Phillips recalls. “And I knew that they wanted, they needed, to hear Kate. They needed to hear something from the West besides me, and Kate was quintessential Californian. So I booked a long tour and we drove it, and she got to play in Hartford and Boston and all over everywhere.”

But even more than performing together, Phillips remembers Wolf, who died of leukemia in 1986, as a friend who pushed him to do more. “She would provoke me into doing things that I would otherwise take too long to do or never do,” he recalls. “She got in the habit of haranguing me to go through my journals, which were a bag full of papers with scribbles on them, and putting music to those songs, or demanding that I finish them.”

Predictably, Phillips has been a fixture at the Kate Wolf Memorial Music Festivals near Occidental, a classic folk-music gathering that, Phillips says, still falls short of his idea of genuine acoustic music. “The only way to make music acoustic,” he growls, “is to reach down and deftly disconnect your instrument from the second industrial revolution.”