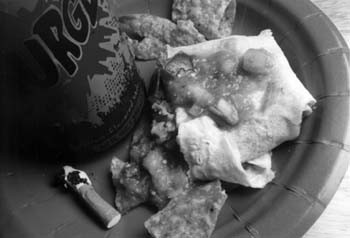 Burrito supreme: The starchy filler of my youth is the comfort food of today.

Confessions of a Burrito Queen

While chatting with a fellow writer recently about professional goals, I confessed a desire to write for a certain glossy food magazine. “Well, you better take some classes,” said this person of nodding acquaintance, “because you need to know about more than burritos to write for them.”

I froze, paralyzed by almost primal shame. There in front of God and my peers–well, one peer–my food roots were showing.

After hearing the story, a sympathetic friend crowned me the Burrito Queen. But underneath the defiant laughter, I remained hurt and bewildered. Weren’t they enough, the mango-jicama quesadillas I made, the home-baked bread, the intricate Indonesian salads? And why was I so upset by an offhand remark from this guy, who had never sat at my table (and never would after a thoughtless crack like that). The truth is, he managed to hit uncomfortably close to the mark. I’ve learned a lot about the upper crust of gastronomy–enough to want it, enough to do it well–but just apply a bit of pressure and all the filling comes out.

Individual foodways show where we come from as clearly as a map. I grew up in a family of seven children and frequently underemployed parents. We always had food on the table, but it was usually bland stuff with starchy filler–ketchup-based spaghetti, oatmeal- heavy meatloaf, and, yes, burritos–and there was never much in the cupboards.

Meanwhile I began to covet the sugary cold cereal and potato chips that lay about lewdly in other people’s kitchens, and learned how to wangle a share of the generous dinners served in the comfortable dining rooms of strangers. After the loud, tense meals at home, at which everyone was hyperconscious of exactly how much was on each plate and how much was left in the pot, take-out eaten absentmindedly in front of the TV at a friend’s house was a positive luxury. And the ignominy of my 12th-year birthday party, organized around ragged scoops hacked from a freezer-burned, half-eaten, five-gallon bucket of generic ice cream, stung even more when contrasted with one acquaintance’s gathering, complete with pizza and two Baskin Robbins ice cream cakes.

No questions here about where my comfort-food choices come from.

If private preferences reveal where you’ve been, public practice shows where you want to go. Anyone who wants to blend and move up in the dominant food culture/economy can do it, with enough cash and energy. Fancy restaurants are a good place to start, offering a nicely literal context for the concept of conspicuous consumption: all it takes is a clean pair of slacks and a careful wad of greenbacks (or an overused credit card) and you’re in the door, puttin’ on the ritz, at least for one night.

GROCERY STORES are trickier; though you’re buying food for private use, you can bet that other people are noticing what’s going in that cart. Here a thoughtfully planned shopping list conceals a multitude of proletarian sins. Those who lack money can still spend their food stamps on high-quality goods; save for the scrutinizing eyes of the people behind them in the checkout line and the checkout clerk, no one will be the wiser.

But even the food products themselves tend to be arrayed on opposite sides of the tracks. For example, brand names are essential pillars in the system of grocery-store snobbery, though most producers will now admit that the tomatoes or peaches or whatever are often picked from the same field and processed at the same plant as their generic counterparts. Lean hamburger is generally more expensive than fatty meat, presumably to compensate for the extra labor involved in removing the fat that used to represent richness and well-being. And in an odd reversal, “peasant bread” made from plain materials costs double or triple what the heavily processed and scorned bread does for today’s workaday “peasants.”

WHAT DEFINES cuisine de hoi polloi changes from year to year, or even from season to season. When something becomes plentiful, the cost usually goes down, more people can afford it, and it loses its sheen of exclusivity. With each new development in food technology, or expansion in the means of production, or successful promotion of an obscure fruit (think kiwi!), the swells have to find some other foodstuff.

Appropriating a regional or era-specific specialty and presenting it with an ironic tweak is a time-honored culinary approach to this dilemma. Barbecue, meatloaf, and cream pies, once looked down on as hopelessly déclassé, are now receiving regular space in Gourmet and other big players in the food world.

Such magazines are great guides for motivated plebes like myself who want to keep up with the Joneses. The glistening color photos and ritualistic recipes promise Eleusian experiences beyond my wildest childhood dreams. But I’ve learned to eff the ineffable pretty well. Newspaper food sections, the World Wide Web, junk mail from Time-Life cookbooks: all are gleaned for my mental pantry.

I will probably never prepare a goose liver from France or own a wood-fired outdoor oven, but I sure can tell you what to do with them.

“Shabby genteel” is probably the most accurate description of the food habits that have emerged at my own particular junction of background and ambition. My cookware consists almost completely of thrift-store pans, supplemented by a Cost Plus wok with the non-stick coating flaking off and a Calphalon roasting pan (one thing at a time, right?).

I experiment with one new dish a week, but it’s as likely to be a ring of gooey pull-apart rolls as an East Indian stew.

And for Thanksgiving last year, our turkey was stuffed with figs, bacon, and homemade cornbread, which concoction I then happily ate during the middle two hours of a 12-hour X-Files marathon.

I call it “Revenge of the Burrito Queen,” living well–on my own terms–being the best revenge.