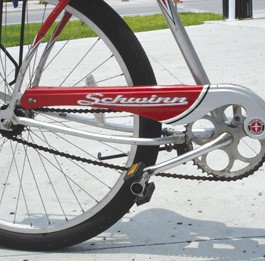 Couch potatoes, doughnut eaters and fossil-fuel addicts! The “Bike Locally Challenge” is a chance for redemption. The Marin Bicycle Coalition is selecting six people who are “bike curious” but not necessarily bike-dedicated, handing each a brand new Globe bicycle, a personal trainer and a bicycle mentor, and giving them six months to become a lean, mean biking machine. Only Marin County residents are eligible; applications must be received by April 18 at www.marinbike.org.

The Sonoma County Bicycle Coalition hosts its own challenge for Bike to Work Week and National Bike month, encouraging commuters to sign up for the “Team Bike Challenge.” Gather a team of two to five riders, and commute by bike as much as possible through the month of May. The team with the most points wins bike accessories and a reception in their honor. For more, see www.bikesonoma.org.

Activist burnout is a real phenomenon, as people protest and fight oppression for years—only to see society remain hell bent on its own environmental and social collapse. On April 7, the Peace and Justice Center of Sonoma County kick-starts a project to reinvigorate local activism by organizing strategically and developing alliances with other local groups. Be part of the first strategy meeting on Thursday, April 7 at the Peace and Justice Center. 467 Sebastopol Ave., Santa Rosa. 5:30pm. 707.575-8902.