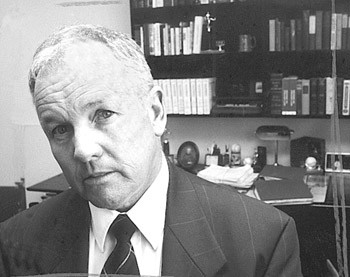 THE PLAINTIFF in a high-profile civil trial took the stand on Monday and told the jury in a Petaluma courtroom that she was “shocked, angry, and upset” when a colleague in the Sonoma County District Attorney’s Office allegedly joked about killing his wife and running away with the plaintiff.

April Chapman, a top investigator at the DA’s office, claims that she was sexually harassed by prosecutor Bruce Enos, with whom she shared an office and who reportedly made unwanted sexual overtures. In the complaint, Chapman further alleges that District Attorney Mike Mullens retaliated against her by demoting her.

Mullens, who is preparing to run for his third term in the March 5 election, has declined to comment on the case. On Monday, the first day of the trial, attorney Michael Senneff, who is representing Mullens, said the DA took prompt action to protect Chapman when she reported the harassment and requested a transfer.

“[Mullens] made the decision that he immediately needed to transfer her to protect her,” Senneff told the jury.

Chapman and her attorney, Gary Moss, contend that the transfer was tantamount to a demotion and constituted undue retaliation for blowing the whistle on Enos. As a result of the transfer, Chapman–a former sheriff’s deputy with a reputation as a top criminal-fraud investigator–was sent back to the front office to handle case-prep work, maintaining her salary but exposing her to humiliation in an entry-level position handling paperwork and serving subpoenas.

“We consider that to be an adverse business decision,” Moss told the Bohemian earlier this month, “the equivalent of a demotion.”

This is not the first time Mullens has been on the firing line over his terse management style and his handling of women’s issues. The DA’s office has been criticized repeatedly in the past for its mishandling of cases related to women’s issues, specifically the investigation and prosecution of rape, sexual assault, and domestic violence cases.

In 1999, a deputy district attorney was removed from a rape case after the Women’s Justice Center of Santa Rosa complained about “lying,” “demeaning” behavior, and “prosecutorial misconduct” in the handling of the case. In 1996, Maria Teresa Macias, a Sonoma Valley mother, was murdered by her estranged husband after the DA’s office and Sheriff’s Department failed to act on numerous complaints and botched the woman’s restraining order. The family of Macias has filed a wrongful death suit against Sonoma County law enforcement agencies that were involved in the case.

That trial is scheduled to begin next spring.

Moss, who has deposed more than two dozen witnesses in the Chapman case, said he will present evidence that shows Mullens’ mishandling of the Chapman complaint is consistent with his past management decisions.

“His management style is very much an issue here,” Moss said. “His decision was made very impulsively, in almost a rash manner. And we have other evidence that it is not unusual for him to make ill-considered decisions without conferring with staff.

“He’s a strong-willed person and that serves him well as a DA in the types of decisions he has to make, but it certainly worked against him and my client in this instance.”