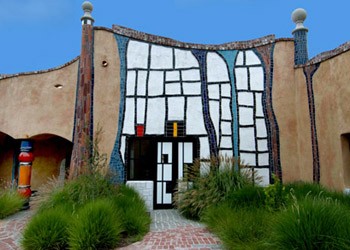 Psssst. You didn’t hear this from me, but there’s more to do in Napa than wine picnics, V. Sattui, Taylor’s Automatic Refresher, gawking at the French Laundry or stalking Frances Ford at Niebaum-Coppola. Just do me a favor and don’t tell anyone else. It’ll be our little secret.

Become an Artist–or at Least Eat Like One: Napa’s Oxbow School, created in part by the Mondavi family, is a sort of artistic laboratory for creative teens. Typically, junior and senior high school students board for a single semester to explore the traditional artistic mediums of art, sculpture and printmaking, along with newer disciplines like computer design. Think of it as a hipper, more intelligent version of that Fame school–without creepy dance productions.

This summer, the doors swing open to a handful of adults interested in rekindling their own artistic muses. The kicker: the school lunch lady is a Chez Panisse­trained protégée of Alice Waters and summer students get two meals a day. Meals typically include fresh produce harvested from the school’s own gardens. Summer sessions for teens begin in July, and students are encouraged to help with harvesting and, of course, enjoying the fruits of their labor. Who says you can never go back! And with such a tasty incentive, why shouldn’t you? Summer Studios, the Oxbow School, Napa. 707.255.6000.

Join the Salon Society: Breeze into a sea of pink and coral, filled to bursting with roses, bon bons and caviar at Swanson Vineyard‘s thrice-daily tasting salon. Modeled after French society salons of a gentler era, the lily-gilding is de rigueur and no tiny detail (or table space) is left to chance.

Gathering at the appointed hour, eight guests are led into Swanson’s teacup-sized (at least by Napa standards) tasting room to be wined and gently dined through a series of cheeses, caviar and other petite nibbles paired expertly with the winery’s most beguiling red and white wines.

Cooked up by thirty-something Swanson daughter Alexis, there’s nothing even remotely stuffy about the Salon tasting. With leopard-print napkins, two tiny costumed dogs as occasional hosts, unabashedly pink wine (in addition to some pretty serious Merlots) and a humbling double-blind tasting, visitors are encouraged to socialize, ask questions and be hedonistically entertained for 90 minutes. Is that too much to ask? Swanson Vineyards Salon tasting, by appointment only. 1271 Manley Lane, Rutherford. Jean Lafitte tasting, $25; Harvey tasting, $55. 707.967.3500.

A Nearly Gourmet Lunch for Under $10: I had exactly 15 minutes to eat lunch and get on the road. In Napa, where the leisurely two-hour, $200 lunch is practically a matter of course, this is no small problem. Enter Pizza Azzurro, where even during a Friday lunch crush a wood-fired pizzetta is on your plate in a matter of minutes for under $10. Sweet. Admittedly, I had a little guidance. The cook, knowing my time constraints, steered me toward the quickest meal: a base of crisp, thin pizza crust sprinkled with olive oil and cheese and topped with a cold salad of spinach, red peppers, cheese and citrus vinaigrette.

Not since my teenaged discovery of the Olive Garden’s endless soup, salad and breadstick combination have I been so excited about bread and salad. The enormous plate arrives mounded with greens that, as eaten, reveal the crisp olive-oil-laden bread waiting below. Joy! Elation! And, most importantly, postlunch punctuality! Pizza Azzurro, 1400 Second St., Napa, 707.255.5552.

Not (Exactly) Your Daddy’s Golf Club One of Napa’s newest restaurants has emerged from a historic resort that’s in the midst of its own transformation.

The Grill at Silverado is a wallet-friendly fusion of California-Asian with influence from the chef’s own Hawaiian background. Featuring starters curried crab chowder, deviled eggs, baby back ribs and coconut shrimp, chef Peter Pahk sticks to tried-and-true crowd-pleasing hotel classics, but isn’t afraid to throw in a few curves. The restaurant is committed to using sustainable and/or local foods in most of its dishes, no small feat, considering the size of the restaurant operation, which serves several hundred for breakfast, lunch and dinner.

The family-friendly grill is just part of a massive renovation of the resort that has included a $4 million golf course upgrade, health spa and new room décor. How smashing, Buffy. The Grill at Silverado, 1600 Atlas Peak Road, Napa. 707.257.0200.

Still on the Hill Wine is nice and all, but vodka? Now we’re talking. Napa is home to the Domaine Charbay distillery, which creates super premium vodkas in disarmingly simple flavors like blood orange, Meyer lemon and ruby grapefruit, as well as whiskey, rum and odd little spirits like pastis and grappa. The distillery is open by appointment throughout the week for visitors who are interested in the fine art of distillation–or who just love vodka. Tours are still guided by the Karakasevic family, the owner-operators who’ve been in the booze-making biz for some 13 generations. Unfortunately, California law prohibits tasting hard alcohol on the tour, as well as diving headlong into the giant copper pot still. You can still dream, though. Domaine Charbay, Spring Mountain Road, St. Helena. Tour by appointment only, $20. 707.963.3343.

Become a Cave Dweller Well-heeled philanthropists shell out 150 bucks or so for Napa’s underground wine cave tour, which benefits the Napa Museum. Bully for them. You can become one of the cave-set for a whole lot less with just a few phone calls.

Here is a small sampling: Pine Ridge Winery, daily cave tours at 10am, noon and 2pm, 800.575.9777; Rutherford Hill Winery, daily cave tours at 11:30am, 1:30pm and 3:30pm, $10, 707.963.1871; Jarvis Wines, take the Bacchus tasting tour followed by a sit-down tasting, $20, 800.255.5280.Join a Cult: In Napa, some of the most expensive, most sought-after wines have been made in trash cans in someone’s backyard. Seriously. Wines likes Screaming Eagle, made in purposefully miniscule batches in home-grown operations, have been known to command $500,000 or more for a single bottle. Nuts? Yes. But regardless of the economy, the cult of wines is strong in Napa, and the harder to acquire, the better.

For example, there’s Quixote. You’ll have to wait until February 2007 to see the amazing winery built by Friedensreich Hundertwasser in the late 1990s, but not because it isn’t done; the winery’s been in operation for several years. But the amazingly abstract, no-straight lines whimsy of this famous European architect is off-limits to the public due to zoning restrictions. No matter. You can buy the organic wine, made in limited batches by the former owner of Stags’ Leap Winery, under the Panza and Quixote labels. Take a look at www.quixotewinery.com.

And finally, Napa’s Backroom Wines is a local favorite for finding both hard-to-find rarities as well as a nice picnic rosé. Owner Daniel Dawson is everywhere at once, sending out newsletters, hosting tasting events and guiding customers to his most recent finds from Napa and beyond. The best news: he won’t steer you toward a stinker, no matter how tight your budget. Backroom Wines, 974 Franklin St., Napa. 707.226.1378.