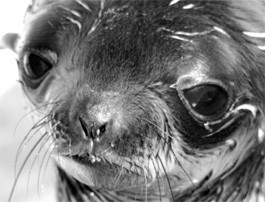 Mystery of the sea: Marine biologists remain stumped as to why large numbers of northern fur seals are ill this year.

Despite the sounds of construction in the distance, there’s a sense of serenity, of playful peacefulness as seven northern fur seal pups slide lazily through a salt water tank at the Marine Mammal Center at the Marin Headlands. One animal floats leisurely on the surface, its back and front flippers connecting gracefully in what the human staff calls the “jug handle” maneuver. Instinctive to this species, this particular posture lets these animals regulate their body temperature while living almost entirely out at sea.

Which is why there’s also an air of mystery surrounding this saltwater tank and two others nearby, where northern fur seals are being nourished and nurtured with as little human contact as possible until they’re released back into the ocean in March or April. They’re the last of a record 34 northern fur seals that were rescued last fall in the region spanning the northern tip of Santa Barbara County to the Mendocino coast, and everywhere in between.

In an average year, the MMC sees just four or five of this type of seal.

Record numbers of northern fur seals were also rescued all along the California, Oregon and Washington coasts last fall, says Bob DeLong, a research biologist with the National Marine Fisheries Service in Seattle.

Why so many? What’s happening out in the Pacific Ocean that caused these fragile young mammals to be found weak and emaciated on beaches, even on roads near creeks and rivers? The answers aren’t clear.

It has happened before. In 1993, the Marine Mammal Center rescued 22 wayward seals, and in 1997 the total was 30. But those were years when the surface of the Pacific Ocean off California’s coastline was warmed by the climate conditions known as El Niño. This isn’t an Niño year, and an increase in stranded northern fur seal pups has never preceded El Niño conditions.

“It has always resulted from oceanographic changes resulting from a full California El Niño,” DeLong explains. “The latest word on El Niño is that throughout much of the tropical Pacific, sea surface temperatures have declined dramatically and El Niño is on its way out. It’s unlikely that we’re going to see a strong California Niño.”

So if that’s not the culprit, what caused so many ill and sick northern fur seal youngsters to come ashore?

Although all the rescued pups were extremely small and undernourished, few had injuries that would have forced them to shore. Of the 34 taken in by the MMC, 22 survived and are thriving. They’ve all been checked for disease, for pathogenic bacteria in their digestive tracts. Nothing harmful was found.

“Something is different this year and we don’t know what,” says Deb Wickham, animal operations manager at the Marine Mammal Center.

“The animals are certainly telling us something,” adds center spokesman Jim Oswald. “We don’t necessarily know what it is yet.”

The northern fur seal pup known as Odle2 skims elegantly through the shallow water. The seal’s sleek and gleaming fur stands out in sharp contrast to the seagreen-colored hard plastic child’s swimming pool in which she flips and circles in a slow, damp choreography of her own design. Odle2 is sharing a pen and the small water source with Sandy Goose, a northern fur seal pup who’s recovering from flipper surgery. Sandy Goose hunkers down behind the pool and appears a bit subdued, but Odle2 seems bright-eyed, active and healthy.

It’s a far cry from the evening of Nov. 29, when Odle2 was spotted on light rail tracks in Sunnyvale. Commuter trains were held up for about 10 minutes while animal control officers cornered the malnourished and frightened animal. They captured her on nearby streets. She was taken to the local police department, where an officer called the Marine Mammal Center.

Generally, the person who notifies the center that an animal needs rescuing gets to name that animal. Seals, sea lions, whales, dolphins and sea otters have been named by CHP officers, firefighters, beachcombers, homeowners and other community members. Odle2 was named for the police officer who arranged for her to be picked up by the MMC. There was already one Odle on the books, so she became Odle2.

When she was brought in, she weighed a little over 10 pounds, and was considered to be in critical condition. As of Feb. 18, Odle2 weighs a healthy 22 pounds. All of the rescued northern fur seal pups were just skin and bones when they came to the center, with their fur literally hanging on their bodies. The 22 who survived have all doubled their weight.

“It’s been really fun watching them grow up,” says Oswald.

Heads bob to the surface of one of the salt-water tanks as visitors pass quietly by. The seals are incredibly cute, agile–and wild. When staff and volunteers enter their pens, the animals appear to express themselves and their moods with their mouths and their teeth. MMC staffers use “herding boards”–large pieces of thick plywood with metal handles attached–to avoid getting bit. The battered herding boards are riddled with bite marks.

Odel2 and the others are handled as little as possible, and people are asked not to talk near their pens, so the animals won’t get used to a human presence.

A batch of six to eight northern fur seals will be released back into the wild on March 11; another batch is scheduled for March 31 release. The final group will go into the ocean sometime in April. They’ve all been microchipped.

DeLong says many of the pups born in 2006 developed slowly and didn’t seem to put on the weight they needed in their first few months of life.

“We don’t know the cause of that low growth. It certainly might signal something about the availability of food for adult females, although adult females appeared in good health and did not have low weights.”

And although the rescued pups didn’t test positive for any kind of harmful bacteria or disease, that doesn’t mean they weren’t infected and ill when they were infants on the seals’ breeding islands, which are far out at sea.

“I think that tree has already fallen in the forest and it’s too late to observe the event,” DeLong says.

The only option is to wait and see what happens next.

“We’ll look at the next cohort that’s born [this spring], and we’ll monitor their weights.”

The Marine Mammal Center, 1065 Fort Cronkhite, Sausalito, is currently closed to the public because it’s constructing new pens, pools and buildings, including an extensive visitors center. The center, which is expected to reopen to the public in spring 2008, has raised $20 million of the $25 million project budget, and fundraising is ongoing. The Run for the Seals four-mile walk/run will be held Sunday, April 15; registration is $28-$32 at www.runfortheseals.org or call 415.289.0188. The pupping season starts in late February and early March, so the center is promoting a ‘Leave Seals Be’ campaign. If you find an apparently abandoned seal pup, keep your distance, don’t touch it and call the 24-hour response hotline at 415.289.SEAL.