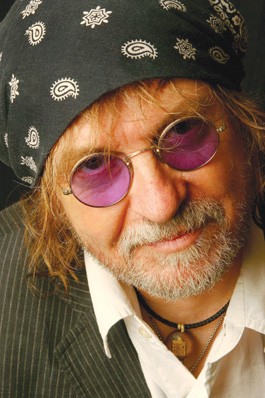 Ray Wylie Hubbard's hard lessons from 'Up Against the Wall'

Most songwriters are hard-pressed to explain where their music comes from. Ray Wylie Hubbard once summed it up as an equation: “Inspiration and craft plus time and effort minus fear and doubt, multiplied by purpose equals song.”

That summation appeared in his comments about the songs of his 2001 release, Eternal and Lowdown, but it could be applied just as accurately to his newest CD, a powerful, stripped-down set with the unwieldy title A. Enlightenment B. Endarkenment (Hint: There Is No C).

“I still believe that,” he affirms. “Removing your fear and doubt—that is so important, because then you have the freedom to find that inner creativity to write about whatever you want to.”

For Hubbard, a seasoned practitioner, that compositional urge can be triggered by anything from a tornado he experienced as a child to the simple satisfaction of beating on a pan with a stick. “Well, I can drive by a snake farm and write a song,” he laughs, referring to the title song of his previous record, Snake Farm.

“So I can find inspiration. It’s all around, if you’re conscious of it—just look around and see something that’s interesting,” he continues. “So yeah, I can write a song about pretty much anything—wasp nests, opium, the Four Horsemen. This album kinda proves it, doesn’t it?”

With a song devoted to each of those subjects, A. Enlightenment readily confirms that assessment, while applying spare, sometimes strongly percussive musical settings to his plainspoken observations. The feral rhythms of “Pots and Pans” and “Whoop and Hollar” evoke the primal field workers’ chants recorded by musical anthropologist Alan Lomax some 70 years ago, while songs like “Down Home Country Blues,” “Drunken Poet’s Dream” and the title track ride on surging, full-band treatments.

At the same time, the arid emptiness of “Opium” and “The Four Horsemen of the Apocalypse” seems rooted in the dustbowl plains where Hubbard grew up, steeped also in the rich imagery and musical traditions of the Southern church. “I didn’t quite understand what was going on at the time, but I could see the power of it,” he reflects. “So it still stays with me.”

Now 65, Hubbard says he’s been making music ever since “I made that decision back in my 20s that I was going to hang my life on this old guitar,” he says. But for a long time, his only claim to fame as a writer was a rowdy half-joke popularized by Jerry Jeff Walker. Hubbard’s “Up Against the Wall, Redneck Mother” became his musical albatross. For years after it appeared on Walker’s breakthrough Viva Terlinuga record, he elaborates, “I’d go into a club and people would say, ‘Play “Redneck Mother,”‘ and I’d play it. Then I’d say, ‘Here’s another song I wrote,’ and they’d go, ‘Play “Redneck Mother” again.'”

But he’s since made peace with the old tune. “Right now today, it fits in my arsenal very well, because I have all these other songs. I enjoy it now. It’s a good card to have in your hand, a trump card.”

That’s not the only thing he sees differently these days, two decades into what could be characterized as the second act in his biography. “Yeah, the first act was a really bad Tennessee Williams play,” he admits. “Either that or Paradise Lost, I suppose. Up until I turned 41. On my 41st birthday, I got clean and sober. The second act, the last 20 years, has been a really good act.”

Hubbard attributes his turnaround to the dual circumstances of hitting “emotional, mental, physical and spiritual bottom,” and the timely intercession of fellow Texas musician Stevie Ray Vaughn. “Stevie was the first guy I’d seen who had gotten sober but still had an incredible edge to him,” Ray recalls. “I realized I’d had all the fun I could stand and it was time to change my thinking. Try to have that psychic change that they talk about. ‘Cause if I hadn’t, I probably wouldn’t be here now.

“But I have the tools today to play the game in a positive way,” he continues. “I have a quote from my wife: ‘The days that I can keep my gratitude higher than my expectations, I have really good days.’ So that’s what I try to do.”