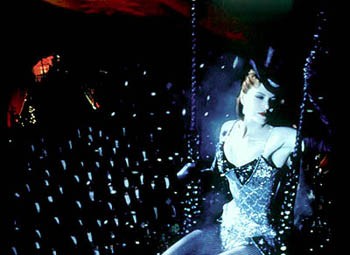 Alexa Albert doesn’t want to wait. “Can we get right to the prostitution?” she asks. The waiter slides glasses of water onto our table. If my guest’s query caught his ear, he does not acknowledge it. He merely takes our orders and moves on to other customers, many of whom–it now seems–are engaged in similar conversations. A number of the restaurants patrons, like Albert and myself, have just been to the movies, where we saw Baz Lurhman’s colorful pseudo-musical Moulin Rouge. Set in 1900’s Paris and spiced with contemporary pop songs, it’s the over-the-top tale of Christian (Ewan McGregor), a young writer who falls fatefully in love with Satine (Nicole Kidman), the Sparkling Diamond, the city’s most famous and sought-after courtesan. Packed with spectacle, crammed with feverish eye-candy, Moulin Rouge is a truly original celebration of truth, beauty, freedom, love–and prostitution.

“I have lots to say about the prostitution,” says Albert.

A Seattle-based doctor, Albert is the author of BROTHEL: The Mustang Ranch and its Women (Random House, 2001). A sensational read, the myth-busting exposé–already attracting a great deal of attention–is based on unprecedented research conducted over the course of six years, seven months of which Albert spent as a live-in observer at the Mustang Ranch, Nevada’s most famous house of ill repute. It was a unique opportunity to study, for the first time, the inner workings of a world-class brothel.

Among other things, Albert learned this: it’s nothing like the movies.

That said, let’s talk about the prostitution.

“The thing I liked about Moulin Rouge,” Albert begins, her hands animated as she talks, her voice emphatic and passionate, “is that right until the bitter end, I didn’t feel any of the usual stigma of prostitution. The movie had none of that stigma. Satine was a member of a community of folk for which prostitution held no stigma. I loved that.

As a symbol of a society that has de-stigmatized prostitution–an institution that Albert thinks should be legalized throughout the country–the character of Satine is a step in the right direction. But, Albert says, the film also contains negative stereotypes that are not so useful. For instance, Satine’s remark that a woman in her profession cannot afford to fall in love.

“Being in love and being a prostitute are not mutually exclusive,” Albert insists. “I don’t think anyone who worked at the Mustang Ranch saw it that way. Everyone wants to be in love. But it’s written somewhere in our minds that you can’t sell your body and have love too. That’s nonsense.”

Satine’s affair with Christian is threatened by the possessive advances of the Duke. A wealthy investor in the Moulin Rouge–the legendary dance hall where Satine plies her trade–Satine agrees to sleep with him as part of a financial bargain made to keep the club from the auction block. But the minute Satine falls in love with Christian, she suffers pangs of guilt in regards to her profession.

Here Albert mentions Brittany and John, the Satine-and-Christian style couple whose courtship she describes in the book. “Because of the weight of what these women do,” she continues, “and the circumstances of living in these brothels for 36 hours at a time, it makes for very complicated relationships. But the two things can be separated.

“So when Satine was going to service the Duke,” she goes on, “I was disappointed, somewhat, that suddenly she had an issue with what she was doing. There was something unbelievable about that. I’m very struck by how effectively the women in Nevada can do it.

“I don’t think these women are having these kinds of dilemmas when they’re going back to the room with these men. I didn’t buy it when Satine was in the room with the Duke, having decided to sleep with him, that she would have any trouble doing it.”

Albert stops. “Am I babbling?” she asks. “‘Cause this is what I do when I’m on a subject I really care about.”

And if others could babble so eloquently, the world would be a richer place. Assuring Albert that all is well, I mention that, during the film, she almost came out of her chair when the Unconscious Argentinean (that’s his name) exhorts Christian, “Never fall in love with a prostitute. It will always end badly.”

“And the story of my book is that nobody would ever say that!” she exclaims. “In the brothels, it’s the women who should never fall in love with the customer, since that’s what ‘always turns out bad.’ That’s the belief in the house. I did almost come out of my chair. It bothered the hell out of me.”

The other thing that bothered her was a scene where the Duke attempts to force himself on Satine. In her observations of the Mustang Ranch, such a thing would never happen.

“These women are masters,” she says. “These women control that bedroom like you’ve never seen. So the part where Satine loses control and the guy is about to rape her, it just does not happen in Nevada. On the streets, it happens. Other places, it happens. But in the brothels, the women are in complete control.”

Of the Duke, she says, “His disrespect of her was intolerable. ‘I own you!’ That’s not what a customer thinks when he walks into the room. These men are in awe. They are so overwhelmed. Not because the women are deities, but because they don’t know how to be with these women. These are bumbling, awkward men. You wouldn’t see them come in saying, ‘I’ve paid for you, you’re my property!’ I never saw that.”

One final note. Satine secretly dreams of becoming an actress. In reality, says Albert, when the Mustang Ranch women leave the profession, they tend to gravitate toward customer service jobs.

“They run daycare centers,” she says. “They become nurses. They help people. They do people skill jobs. Because–and I’m sure Satine would agree with this–what is prostitution if not a people-skill? It’s the ultimate people skill. And if you’re good at your job, your customer always goes away feeling good.”