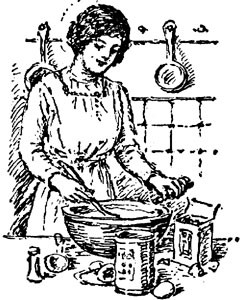 Where does food come from? Maybe the garden or the grocery store or–God forbid–the 7-11. As for dinner, I know the origins. Dinner comes from Mom.

Well, dinner used to come from Mom. That’s what, traditionally, Moms do (or did): They fix dinner and pack your lunches. On your birthday, they make a cake, and they are the ones who go shopping to buy things to make the cake. It’s part of the job description: “Feed family.”

Dinner was very rarely up to my specs when I was a kid. I wanted fried chicken from the deli counter at the grocery store, and we got chicken taco casserole. I wanted fish and chips from the local deep-fry palace, and we got seafood gumbo. I wanted hamburgers from Burger King, and we got thick patties from the grill in the backyard. I wanted Spaghetti-O’s, and we got baked ziti. I wanted a fast-food restaurant, and I got a mother.

My mother was very much a mother of the ’70s–a time when recently liberated women were entering the work force, but it was still par for the course to grow and can your own green beans. Mom had a vast assortment of harvest-gold and avocado-green appliances–a yogurt maker, a waffle iron, an electric skillet, a Sunbeam mixer–and she put them to good use. I ate the results, but unless she was making cookies or a cake, I was rarely excited about it. And you can’t say she didn’t try:

Mom: What would you like for dinner tomorrow night, honey?

Mom: How about pork chops?

Mom: What about chili? I have some top round I need to use.

So come the next night, the loving brood gathers around the table after an hour of “Will you please set the table now?” and “I need you to turn off the TV and set the table like I asked you to 20 minutes ago” and “Turn off the TV already and go get your father; dinner’s been ready for 10 minutes!”–and what’s waiting for us? Stuffed green peppers! Oh, odious peppers! Even if I took the stuffing out of the pepper and pretended it was meatloaf like Mom said, never did they pique my child’s palate. When has meatloaf ever come from a soggy pepper? No wonder I refused to turn off the TV and set the table; Leave It to Beaver reruns were far more entertaining than the stuffed green peppers Mom was squandering away her talents on.

I don’t think people realize how much of a privilege and a gift it is to be able to have the responsibility of someone else. Cooking for yourself can be satisfying, but it misses half the point, the part where you say, “Look: I love you so much that I made you this yummy beet and orange salad, and I want you to eat it and feel good about yourself.” A privilege like that is easy to forget if you are already overbooked and having to stop at the store for milk on the way to pick the kids up from soccer practice, knowing full well there is a yard to be mowed and laundry to be washed.

It’s also easy to forget that cooking for others is a gift when the very people you are cooking for want to bring the gift back and exchange it. Suddenly, dinner becomes a power struggle. At the age of 10, facing those soggy stuffed green peppers, “Yuck!” was the first thing that came to mind, not “Gee, it’s so nice of Mom to put the effort into making wholesome meals for her family after she’s had to put up with grumpy engineers at work all day long.”

No one wants to perform for an indifferent audience, let alone a hostile one. When I complained to Mom about the unsatisfactory contents of my lunch bag, she pointed out that I was 15 and more than capable of preparing my own lunch to take to school. How capable was I? Promptly my lunches became nothing but entire cans of pineapple chunks, and still I found it to be a burden.

Once my mother began working as a secretary, the source of our dinners became markedly more processed, and my childhood fondness for canned biscuits was sated. With the arrival of our fancy new microwave came a nuclear frenzy of dishes that should never, ever have been microwaved. But I seemed to warm up to it, even the micro-baked cupcakes, which turned out as pales as a baby’s ass. The less time Mom had to spend in the kitchen, the more I liked our dinners.

As convenience products become more convenient and takeout menus replace recipes, actual cooking becomes more of a hobby and less of a duty. It’s saddening to realize the amounts of fast food that many children consume today–not as a special occasional treat, but as a staple food group. When dinner starts to come from the drive-through, that’s when it stops coming from Mom.

For my mother, who had had her affairs with Mastering the Art of French Cooking and fondue pots when she and my father were first married, I think there was more relief than guilt in her new factory-assisted wave of dinner preparation. She never used to buy jarred tomato sauce or packets of Uncle Ben’s rice pilaf mix, but that was before she had 40 prime hours taken from her week and two kids to cart around to their roster of after-school activities. Though she may have fondly recalled the days when she made her own granola, I don’t think she missed them–she was too tired to.

There are nights when I come home from work, go through the mail, listen to my messages, exercise, shower, and wind up too pooped to fix anything for dinner more elaborate than frozen pizza–and I’m just a single woman in her 20s. It’s easy for me to blather on about how parents now are doing a crappy job of feeding their kids, because I don’t have any. If I want to feed myself junk, that’s fine; it only affects me. But what if I had a family? What would we be having for dinner tonight? Either I’d have to become less of a wuss, pressing on and cooking the damn dinner, or not work at all and become a full-time housewife.

Which would be fine with me, although it’s not often a choice, is it? Until being a housewife offers a competitive wage, the moms of America who are out in the work force–by need and not by preference–will be staying right there.

It’s hard work to feed a family under any circumstances–and the circumstances are always going to be changing, but the importance of sitting down as a family to share a dinner together hasn’t dwindled. I know that I would be a very different person if my mother hadn’t cooked for us–whether it was homemade chicken soup or Stove-Top stuffing mix from the box–and that certainly never crossed my mind while I staring down rejected stuffed green peppers.