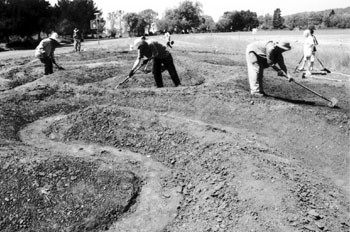 The Earth Moved: Volunteers dig and hoe, creating the labyrinth outside the LBC.

The sacred path of labyrinths leads to SMOVA

It looks like a freshly dug pile of dirt because, technically, it is-at least right now. But as grass grows and feet wear down the path between the low mounds of earth that leads through a winding series of turns and loops, the dirt pile at the Luther Burbank Center for the Arts will become a labyrinth, for a labyrinth does not mean anything until you walk through it. Otherwise, it’s just another landscaping project.

“What I was surprised with about the labyrinth was how powerful it really was,” says Dana Andersen, coordinator of the Sacred Art Symposium that accompanies the unveiling of the labyrinth, and curator of the Sonoma Museum of Visual Art’s “Centering: Ancient and Contemporary Expressions of Sacred Art.” “If you have attention and intention when you’re walking it, it enables you to go into a deep walking meditation. It’s partly the sacred geometry, the circuitry. They’re not like mazes-there’s no walls, per se. It’s built in a way that you can walk without paying too much attention.”

Labyrinths as an art form and a sacred symbol span centuries and cultures. “Sacred art is as old as art has ever been, because art began in that context,” Andersen points out. Some of the earliest forms of labyrinths are found in Greece, dating back to 2500Ð2000 b.c. Early Christian labyrinths go back to the fourth century, and in the Middle Ages, labyrinths were created on the floors of cathedrals, supposedly as a substitute for the pilgrimage to Jerusalem. Of these, the most famous is at Chartres Cathedral in France.

So why did the Luther Burbank Center decide to build a labyrinth on their grounds? The project began when LBC Executive Director David Fischer commissioned the labyrinth and asked fellow LBC residents Sonoma Academy and SMOVA to partner with the LBC to create it.

“It’s pretty outrageous, in a way, that David Fischer called for a labyrinth,” notes Andersen. “A labyrinth is a fantastic thing to have, but it’s a sacred site. The funny thing that’s happening in the modern world is that anything that had to do with sacred, you wouldn’t touch it with a 10-foot pole. You could have dead sharks floating in formaldehyde be the winning art piece of the Whitney [Museum of American Art] Biennial, but you couldn’t touch anything that had any resonance of something sacred.”

Sonoma Academy’s role in the labyrinth is no mere fleeting class project. In preparation for its construction, Andersen, architect Malcolm Yuill-Thornton, and architectural and set designer Jan Brady came into the classrooms for a week to present “what the labyrinth was about [and] explore what its essence was” before having students “create their own labyrinth designs,” says Andersen. Sonoma Academy is a college prep school, but it also has an emphasis on alternative ways of approaching learning. In its Connections program, students find ways to serve the community.

“On this, it was really natural-connect down the hallway with Sonoma Museum of Visual Art,” Andersen says. Four of the students’ labyrinth designs were then painted on floor-size canvasses that SMOVA displayed at the LBC.

During construction, Sonoma Academy parents and students worked with Alex Champion from the Mendocino-based Earthworks, a company that has designed many labyrinths in the Bay Area. “It took about two full 11-hour days of the major earth shaping,” says Andersen. “It’s hard work, but it’s also precise work. When you put the shovel in, you can’t do it willy-nilly. You have to actually carve the land. In a way, it’s like clay kneaded into a mound.”

The resulting earthwork will, barring asteroids or earthquakes, last for centuries. Sonoma Academy students will select, plant, and care for the labyrinth’s ground cover as part of a greenhouse course.

The LBC labyrinth is based on a “meander” pattern. The goal is in the middle, and when you reach it, you have only gone half the way; you need to turn around and walk out. Andersen explains: “As you are coming towards the center, it begins to become a kinesthetic embodiment of the journey to the soul. At times, you look like you’re coming right towards the center of the labyrinth, and you think, ‘I’m almost there!’ But then the path takes you away from it.

“In a way, the labyrinth is acting as a reference for our divine quest and the center of our being that we are trying to find. We’re all on a journey, and we’re all looking for home. And as the simple fairy tales tell you, it’s where you started from, and it’s within you.

“When you walk it with a group of people,” Anderson continues, “at one point you are walking toward each other, and then in the same direction, and then away from each other. It’s a metaphor for all of us, how our differences are against each other and with each other.”

More and more people have been looking to find themselves in the symbolic journey of a labyrinth’s path. Of the 1,500 labyrinths in the United States, a third were built in the past year. Churches, individuals, and schools around the world are incorporating labyrinths into their grounds for visitors to walk through and find solace. The idea of using the labyrinth as a walking meditation was introduced in America by Dr. Lauren Artress, canon at Grace Cathedral in San Francisco, when she copied the design of the Chartres Cathedral labyrinth onto a portable canvas floor covering.

“This labyrinth,” says Andersen, “will be a pilgrimage spot for people. I think 9-11 brought a shift, and people are saying, ‘Maybe I do want art with meaning, and if I want art with resonance of the human journey and the human soul, then I have to be able to take on the issues of sacred art.”

Andersen hopes the labyrinth, the exhibit, and the symposium will be a mark of what is to come for the LBC. “The LBC has been an unmined treasure for a long time. Having the exhibition spill out into the halls of the LBC-it’s expanding significantly the role of the arts in the center.”

“Centering” is a collection of works by artists from around the world who explore the depth, range, and vibrancy of contemporary sacred art. “The art exhibit calls out, ‘What’s happening with ancient art?'” says Andersen. “Is there such a thing as contemporary sacred art? It’s not simply a return to this old form. It’s a rediscovery. One of the things that’s happened in modern art as a whole is a false assumption that innovation is just whatever breaks the rule or pushes the boundary, and in the end that leaves you stuck on the periphery. Innovation isn’t originality anymore, because it’s become a game of shock value. What this type of movement does is one of many examples of people wanting to come back to the center and to realize that originality means ‘from the origin.'”