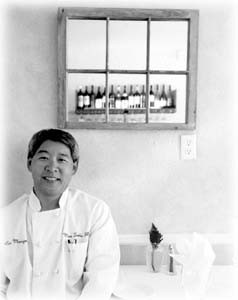 Daddy’s Girls: Mes Trois Filles owner and chef Len Moriyama named his outstanding eatery for the love of his daughters.

THE THREE GIRLS of Mes Trois Filles are Kelly, Isabelle, and Georgia, the daughters of chef Len Moriyama and his wife, Jody. He calls them his “inspiration,” and describes them in French in the restaurant’s name to emphasize his cooking’s playful, Continental virtues.

Open for 15 months in the former restaurant Miel location in what passes for downtown Glen Ellen, Mes Trois Filles is just now hitting stride. Elegant, gracious food preparation and presentation, a friendly and informed waitstaff (one waiter, actually), a thoughtful and complete wine list, and fair-value pricing combine to affirm once more the benefits of humankind. This is a meal to encourage peace and love.

It didn’t begin that way. The Dungeness crab cakes, served with an apricot-jalapeño jellied sauce as an appetizer, were on the mushy side, and the sauce’s sweet/hot combination featured far too much of the latter and not enough of the former–indeed, this probably isn’t a sauce to serve with crab cakes at all. Moriyama does better with a tart comprising roasted Japanese eggplant, bell pepper, and sun-dried tomatoes, served with balsamic vinaigrette. And a terrine of smoked salmon layered with cilantro-flavored cream, the slabs of the terrine served in a wasabi-dill sauce, was absolutely delicious–alive with flavors, sensuous with textures. Chardonnay or a good sauvignon blanc, both of which Mes Trois Filles offers by the glass (we tried a Mayo chardonnay and a Dry Creek sauvignon blanc), gives this particular appetizer the perfect finishing touch.

Moriyama, in the French style, builds his entrées around a foundation of meat, poultry, or seafood, and it’s clear he works hard to match the individual flavors intrinsic in these foods with garnishes and accompaniments that not only complement but enhance. This sounds only logical, but it’s a lot more difficult to pull off well than appears. At Mes Trois Filles, Moriyama pairs a breast of free-range chicken with a coulis of leeks; he uses a sauce made from a reduction of cabernet sauvignon to accompany tournedos of beef, but isn’t afraid to zing both the elegant sauce and the beef with peppercorns. The result is as entertaining as Haydn’s Surprise Symphony.

An entrée of pork tenderloins in a honey-ginger sauce, served with onion confit, pickled ginger, and cilantro, was even better. In a combination like this, where the quiet subtlety of the pork plays against the trumpets of onion and ginger, the tenderness of the pork is critical, and the pork was perfect. My companion also found a hint of balsamic vinegar somewhere on his plate, a discovery that pleased him.

Best of the night, however, was the fish of the day: fresh wild Pacific salmon in parchment paper on a bed of Toy Box tomatoes, leeks, dill, lemon, and butter. Baked in the parchment, the salmon was juicy as a peach, the flavors of the vegetables, dill, lemon, and butter rising up into the meat like spray from a fountain. It was spectacular, probably the best piece of salmon I’ve had in five years. And our wine, Jed Steele’s 1995 pinot noir, matched perfectly.

Desserts include a poached pear in phyllo with zinfandel zabaglione, cheddar cheesecake with berry sauce, seasonal fresh fruit, and the ubiquitous crème brûlée, but I recommend heading straight for the chocolate, a Grand Mariner mousse. We enjoyed it with glasses of an imported port and Quady’s Essensia, and swooned. The meal sans tip came to $110 for two.

Those girls have a lot to be proud of, their dad can really cook.