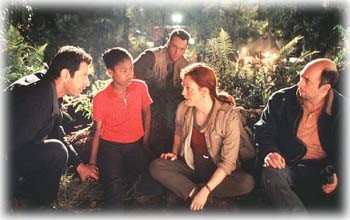 Raiders of the Park: Jeff Goldblum and other actors bravely struggle to save their careers in ‘The Lost World.’

Moral conflict at heart of ‘The Lost World’

HAL LAURITZEN cocks his head to one side and squints intently at me from across the table, an innocuous enough gesture. But with Lauritzen–a calm, still man–this sudden burst of bemused surprise is as conspicuous as a dinosaur in a backyard swimming pool.

And what provoked this response? Only my remark that Steven Spielberg–in a series of interviews to promote his mayhem-filled movie we’ve just seen, The Lost World: Jurassic Park–has said that his new film is “all about family.”

“Family?” Lauritzen repeats. “Hmmmmn. Maybe he means that he hopes whole families will go see it.” Possibly. Spielberg will certainly sell more tickets that way (and has, earning almost $150 million so far).

“If there’s any message here,” Lauritzen says, raising his voice slightly, “it’s to do with the bad guys with the guns vs. the good guys with the cameras. I think it’s no mistake that when the dinosaurs go after that one group of guys in the tall grass, the only ones to come out alive are the non-hunters. I don’t know, maybe hunters taste better.”

The story–involving a team of photojournalists and scientists duking it out with a band of rowdy zookeepers and hunters on an island full of genetically engineered dinosaurs–sets up a strict dichotomy between the opposed moralities of its two groups.

It is a dichotomy that Lauritzen–an avid lifelong hunter and renowned nature photographer (he has been published in Outside, Sierra, and Motorland magazines as well as illustrating Chronicle Books’ Marin) has thought about often. He is currently working on a new book, in which he’ll explore, in words and pictures, his deeply personal passion for duck hunting.

“I’m only a bird hunter,” he explains. “Not that there’s actually any difference between shooting a bird and shooting an animal. But I draw my personal line there: I don’t like the idea of shooting an animal.”
“How can you justify shooting a bird?” I ask.“I can’t,” he says simply. “Any attempt to justify it just sounds like a cop-out. I don’t know, maybe it is.” Perhaps the stark black-and-whiteness of the movie’s viewpoint has stirred up conflict for Lauritzen, a man who routinely eats all he kills, supports the California Waterfowl Association but not the NRA, decries trophy hunting, and deplores what he calls “the shooters,” people whose yen for guns outweighs the respectful experience with nature that he himself craves.

Back to the Jurassic era. In one scene, an army of off-roading yahoos chase a stampede of various sauruses and generally behave badly. “Assuming dinosaurs were re-created,” I ask, “would people actually line up for a chance to take one as a trophy?”

“Absolutely,” Lauritzen nods. “There are still legal hunting safaris in Africa, in spite of efforts to stop them. And even here in the United States, in some of the wider, open parts of Texas, Arizona, New Mexico, they import exotic animals–wildebeests and others. Of course, these kind of hunts fly in the face of everything that I believe in.”

As both a photographer and a hunter, for which side did Lauritzen feel the most affinity in The Lost World?

“Nobody seemed especially intelligent, did they?” he remarks after a pause. “You know, I love my job as a photographer–but I have to say that I think I have more of a deep-seated passion for the hunting. Working with a good dog and having a successful hunt is one of the greatest, deepest joys I’ve ever known.”

Even so, were an invitation to a hunting safari at Jurassic Park to arrive, “I’d pass. But give me an opportunity to photograph a living dinosaur.” His expression erupts once more into a full-on beaming smile. “I’d be there in a second,” he laughs.