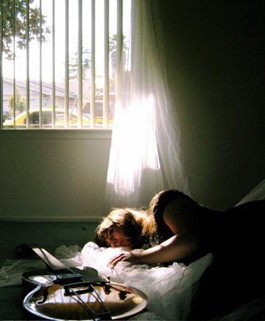 Awful Conflagration of the Steam Boat Lexington in Long Island Sound on Monday Eve’g, Jan’y 13th, 1840, by which Melancholy Occurrence Over 100 Persons Perished. That’s the title given by Nathaniel Currier, of the 19th-century printmaking team Currier and Ives, to one of his earliest and most successful lithographs. Now, well over a century and many generations later, one of Currier’s direct descendants is bestowing similarly morbid titles on her work. “Two Shots to the Head.” “The Demon.” “Sleeping Dead.”

These are just a handful of many minor-key songs contained on Dark Overcoat, the debut album by Currier’s great-great-great-give-or-take-a-few-granddaughter, Emily Jane White, who stumbled upon Currier’s maudlin reputation while recently researching family genealogy. “I was like, ‘Oh my God, it’s in my genes,'” the 26-year-old says of her dark streak. “And my dad is very much the same.”

If recent write-ups in Rolling Stone and Spin and a successful tour of Europe earlier this year are any indication, White could be as important to San Francisco’s burgeoning indie-folk movement as her ancestor was to lithography. Also like Currier, she’s not going to do it by singing anything bubbly or light—or, for that matter, particularly contemporary, commercial or hip. “I’m kind of a classic person,” she says.

“I could listen to Bob Dylan forever.”

While most of the music emanating from the City by the Bay’s neckerchiefed hipsters pushes psychedelically toward the future through acts like Devendra Banhart, Xiu Xiu and Six Organs of Admittance, it would be remiss to ignore an equal regional pull into the past. Be it Two Gallants’ 78-rpm-era fingerpicking, Jolie Holland’s timeless and tortured drawl or Joanna Newsom’s infatuation with the Renaissance age, the Bay Area’s typically progressive thought stops short, it seems, in bearded and milk-faced lads and lassies who take up stringed shell and make merry in song.

White’s young obsessions with the past, in the form of Bessie Smith and Edgar Allen Poe, coalesce into the gothic storytelling of Dark Undercoat, a 10-song journey through the shadowy side of an already darkened imagination. Utilizing blues idioms, religious imagery and traditional icons, White’s lyrical content, at times doubled, acts like a demon of both shoulders who long ago killed off the angel. The recording’s atmosphere is similarly evocative, with squeaking cellos and rattling bass strings; close your eyes, and it’s like stumbling across a band of troubadours in the forest, warning of impending despair.

It might have helped that White grew up in a house built by her father on 30 acres of woodland outside of Fort Bragg, and that she took up horseback riding and reading Jack London and Shakespeare to pass the days. As for music, her parents had programmed a constant stream of Frank Sinatra, which she hated, but alternatives were few. “My first album ever? God, I think it was Madonna, on cassette tape.”

Going away to college in Santa Cruz, she says with an extended giggle, “was like going to a giant metropolis!” After playing in a reverb-laden surf-punk band and an all-female country group on the Central Coast, White took off to France, where she began accumulating material for Dark Undercoat. Upon returning home to Mendocino, she met Santa Rosa&–based musician John Courage, who encouraged her to record with fellow Sonoma County musicians Muir Houghton and Ross Harris.

Sounding far older than her age, and with an attraction to the final end, it’s no wonder that White’s recently gotten an email from a woman imploring her to learn and perform the songs of her deceased brother. She’s still not sure what to make of it.

“There’s so much out there that’s very dark for no reason at all other than to freak people out,” White says. “I feel like if you’re gonna talk about darkness, then make it literary, make it beautiful and also make it really important.”