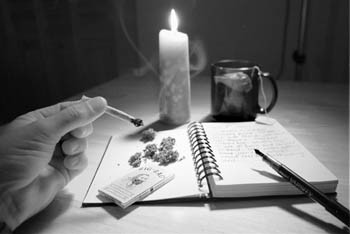 How marijuana ruined my life for the better

SOMETIMES I wonder what I might have amounted to if I hadn’t become a pothead 30 years ago, when I was in graduate school, and pretty much remained one ever since. If not for marijuana, by now I’d probably be securely tenured in some English department and my mother would be able to brag to her friends about her son the doctor of philosophy. I’d be fluent in Academese, a respectable specialist in some form of critical theory, a teacher admired by his brightest students, a defeated imaginative writer, and a wretchedly unhappy and neurotic person. This, at least, is how I envisioned the path I was on at the time and where it must inevitably lead.

Getting high, for me, in 1969, at the age of 22, provided a vitally helpful perspective on the pettiness and irrelevance of an academic career to the creative vocation I felt was calling me. Following an acute psychotic episode–usefully assisted by psychedelic drugs, which triggered the explosion of all my internal conflicts and contradictions–I left the doctoral program and its generous fellowship for the full-time pursuit of my first love, poetry. This may not have been possible without a small but steady independent income that enabled me to live without a “real” job, but that financial independence was also existential in that the freedom it afforded left me no excuses for not doing what I claimed to want to do, which was to write. Smoking marijuana gave me courage, at the time, to follow my deepest imaginative instincts, not only in the actual writing of poems but in the larger arena of making decisions about my life and how I wished to live it. Contrary to conventional wisdom, my judgment felt to me more fundamentally sound when I was stoned than straight.

Encouraged by the permission I felt to write without parental or professorial approval, I set out on the slow, uncertain, and mostly thankless path of the young poet, laboring over less-than-brilliant lines, writing, revising, sending the finished works to magazines, occasionally publishing, more often collecting rejections. Through most of this artistic apprenticeship I was accompanied by the sweet smell of burning hemp, whose presence surrounding my efforts seemed to expand the atmosphere of creative possibility, enhancing my sense of heroic romance on the seas of the blank page, that heady journey into the unknown. Frequently stoned as I indulged my imagination, I knew I was learning something about poetry, about writing, and about myself.

From there it was a slippery slope into the harder stuff: translation, criticism, journalism, editing, and publishing. In the years since my earliest days as a dropout hippie poet I’ve managed to make a working life for myself in these various branches of literary practice, and while I wouldn’t presume to credit pot for anything I’ve managed to accomplish, I do believe its companionship has helped me maintain a certain equanimity amid the myriad distractions, confusions, and aggravations of the surrounding world, enabling me to focus on what matters most, or what I most enjoy. If anything, marijuana has tempered my ambition, relaxing the compulsion to overachieve and giving license to play.

IT IS THIS sense of permission–or permissiveness, as the virtue-pushers would have it–that makes the forbidden herb, for me, a useful antidote to the various societal prohibitions against, for example, “doing nothing.” Pot reinforces my instinctive Taoism. Maybe that’s why it’s considered by some to be a dangerous drug: if everyone used it, nothing would get done. But paradoxical as it may seem, it is precisely when “doing nothing” that I tend to get the most accomplished as an artist. Or the deep involvement, the timelessness, experienced in the flow of creation may feel so aimless or effortless that it might as well be nothing, except for the fact that when I resume more consciously purposeful activity I often find persuasive evidence that I was doing something after all: a written text or other crafty artifact, a rack of freshly washed dishes, a stack of firewood, a pile of paid bills whose checks were written while listening to music or some radio show.

Stoned or straight, I find these kinds of meditative activities to be a means of grounding myself in the mundane patterns and rhythms out of which imagination rises. The content, style, and quality of what I write are not, I’ve found, especially affected by whether or not I’ve been smoking, but I am aware, when high, of more intimate sensuous relations with the language, with the texture of lines and sentences, with a kind of musical understanding not always readily evident to my more rational and sober self. The mild psychosis induced by this subtle alteration of consciousness may provide a different angle of vision, or revision, that can be of use in making esthetic decisions–what works and what doesn’t, how to refine some detail, trim out the excess, or develop some incomplete idea.

Obviously such working habits are more dependent on the mind and skill of the individual than they are on what drugs he may or may not be taking. An idiot on marijuana is still an idiot, possibly more so. And one’s response to pot may vary greatly, depending on personality and circumstances. The health effects of smoking anything cannot be entirely positive, and I’ve seen enough stupid people in herbally induced stupors to be disabused of any evangelical notion of marijuana as a panacea. Like any other substance–food, tobacco, caffeine, alcohol, television–its abuse can be toxic and destructive. But unlike these ordinary and often insidious additives to daily life, pot remains not only legally prohibited but even now, at the turn of the millennium, socially stigmatized in a way that, say, coffee (a truly mind-altering substance) is not.

AMONG my friends, some smoke and some don’t, for reasons of their own–just as I don’t drink coffee because it makes my stomach jumpy–but the ones who do are just as productive in their lives and work and social contributions as are the abstainers. Anecdotally speaking, I’ve seen no correlation one way or another between marijuana use and creativity, citizenship, ethics, or character. What I have noticed when smoking with friends is a ritual affirmation of time-out, a refreshing pause in the everyday onslaught, a moment of quiet dialogue to savor, an island of sanity in the rush of events. Different people have different ways of relaxing, but those who habitually watch TV–whether in the lethargy of their own living rooms or in the noise and convivial drunkenness of a bar with ballgames blaring–seem to me far more at risk for various psychopathologies than those who routinely prefer a few tokes of pot.

While I don’t exactly take pride in my own habit, I don’t consider it a major vice. A couple of puffs in midafternoon, following a late lunch, or at the end of a longish day, in the cocktail hour, or in the evening while listening to some especially beautiful music, strikes me as an eminently civilized way of decompressing the psyche. Whenever I find myself using it more than feels healthy–when I wake up in the morning foggy-headed, or feel a strain on my respiratory system–I may take a break for a few weeks as a way to remind myself of the drug’s potentially negative effects and to refresh my appreciation of its positive ones. I wouldn’t recommend it to anyone, especially children (I’m content with the knowledge that my 18-year-old daughter doesn’t use it), but neither would I discourage the curious from trying it in a conscious, responsible way.

Partner, collaborator, accomplice, friend, companion–marijuana, over the years, has woven itself gently into the pattern of my life in a way that may have prevented me from pushing myself above and beyond whatever I’ve done as a writer. Without the benign corruption of pot, who knows, I might have been a contender. Instead, up to now, in my early 50s, I’ve managed to maintain my physical and mental health, create a few works I hope may be worth saving, cultivate many lasting friendships, and contribute what I could to my communities. For someone of alternately competitive and contemplative tendencies, the path I’ve taken, accompanied by the herbal reality-check of marijuana, feels to me thus far to have been a reasonable compromise. As my father used to say, “Everything in moderation.”