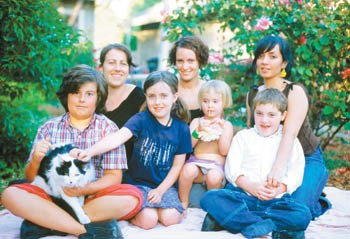 The three women sitting across the table from me don’t exactly look like wild-eyed radicals. But according to the mainstream media, that’s what they are. Dani Burlison-Craft, Lila Cugini and Terrie Samundra-Girdner are three of the estimated 1 million liberal “fringe element” that are planning to “invade” New York City in early September to protest the Republican National Convention.

Sure, they look young and hip, with stylish hair and Portland-chic secondhand clothes. And sure, Burlison-Craft has a frenetic swirl of tattoo creeping kudzulike down her arm. But there’s one thing that messes up the image. The only time they look particularly “wild-eyed” is when they’re laughing about how Xenia, the oldest of Burlison-Craft’s two daughters, is in the other room shouting at a broom that she’s been trying to levitate with her mind, thanks to Harry Potter.

Burlison-Craft, Cugini and Samundra-Girdner are single mothers and the backbone of Santa Rosa’s Mama Collective, a group they founded last year, they say, “to support single and partnered mothers who are involved in artistic expression and activism.” Their first official activity has been to produce a zine by the young single mothers of the North Bay, the first issue of which will be out soon. But another, less tangible result is that, with each other’s support, the Mama Collective’s members are feeling more confident about taking risks–personally, artistically and politically.

“[In art and protest,] there’s a lot of fear that you’re going to get ridiculed and that you don’t have support. You feel really alone,” says Samundra-Girdner. “It can be really lonely parenting. You can feel really isolated, and it’s good to have a support system.”

“Part of a collective,” says Cugini, “is that people individually are shy about making art or making political statements. But collectively if there’s even one other person, or two other people, then there’s strength in numbers; people aren’t as shy.”

“We need to raise money,” continues Burlison-Craft, “at least for our air fare, which is going to be around $1,000.”

To do so, the Mamas have planned a fundraiser for Sunday, Aug. 1. On sale will be baked goods and art, as well as a rummage sale. Tables will also offer voter registration, and of course, more information. “My main focus of going to the RNC,” says Burlison-Craft, “is obviously to support the cause–to feel that sense of global community and to know that there are thousands of people out there fighting for justice right alongside me–but we’re also going to document everything. The plan is to come back and report on what happened. I’ll write articles, Terrie will be working on a film and we’re going to have an anti-Bush art show before the November elections.”

The women also plan to highlight what they see as the GOP’s manipulative choice of the location and timing of the event.

“This is the first time they’ve held [the RNC] in New York in the last 150 years,” points out Burlison-Craft with obvious frustration. “And on top of that, they’re holding it two months later than usual, just a week before the anniversary of 9-11. The GOP is using it as propaganda. They’re playing on people’s emotions and their fears; it’s ridiculous how blatantly obvious what they’re doing is: exploiting the grief and tragedy of 9-11–again.”

But most importantly, the Mamas are going to New York because the policies of George Bush are affecting their children, now and in the future.

“There are these wars being waged on impersonal slogans like ‘war on terrorism,'” says Samundra-Girdner. “I don’t want to live with that fear. I’m going there as a mother because this is a burden that our children are going to carry, they’re the ones who are going to have to live with it.”

“When Bush was the governor of Texas,” adds Samundra-Girdner, “there were times when children couldn’t even go out to play during recess because the air was so bad. That’s why I’m going–because I want to stand up for the kind of life I want for my child.”

Even closer to home, George Bush’s tax cuts are directly affecting some of the Mamas’ livelihoods and those social programs that help single parents.

“I was working for a nonprofit social services agency that deals directly with subsidized child’s care,” says Burlison-Craft. “The funding got cut so badly that they were thinking about closing the agency. I got my hours cut in half and ended up leaving. The first program to get cut was the respite program for kids that are at risk.”

Burlison-Craft can literally rattle off a long list of Bush policies that are directly affecting her ability to raise her child. “The subsidized housing assistance I count on to help me to afford my house is being threatened. Medi-Cal services are getting cut way back. Public schools are constantly doing fundraising because their art programs and pretty much everything is getting cut.”

But in the end, these women are going because they hope to make a difference.

“It may seem minor to some people,” says Samundra-Girdner, “but it’s a really big deal to us. This is what we can do on a small scale, on a local level.”

“I talk to my mom a lot about what’s going on,” says Burlison-Craft, “and she’s really freaked out about me going out to protest in New York because of what she sees all over the news about how dangerous it’s going to be. I try to explain to her, it’s like this Chinese proverb I have next to my desk: ‘Crisis and Opportunity.’ Every crisis carries two elements–danger and opportunity. No matter how bad things are, no matter what huge crisis you’re in the middle of, there’s always some opportunity for something good to come out of it. So for me, the fact that things are just so insane right now in our country–I think there’s a huge opportunity for people to build a stronger community network and to actually do something to make a change.”