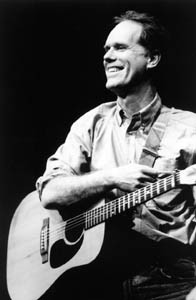 He’s been dubbed the new Dylan, one of the great lyricists of the age, and a postpsychedelic, aristocratic beatnik. Over the years, Loudon Wainwright III has been saddled with his share of sobriquets, both silly and sincere, and there is no question that this idiosyncratic performer has grown into one of the best singer-songwriters in America–a recording artist with a quick wit and sometimes uncomfortable knack for drilling through layers of emotional debris in the most painfully pleasurable way.

His most recent album, Last Man on Earth (Red House), is Wainwright at his best. The album, released last fall on Greg Brown’s folk label, is an engaging blend of humor and nakedly honest–and sometimes mournful–sentiment that serves as a snapshot of the artist at 53, baring his soul as he grapples with divorce, the death of his mother, the ghosts of his youth, and the ups and downs of middle age.

It’s a concept album for graying baby boomers, a signpost for a generation that started out filled with idealism only to embrace the empty materialism of its parents with a fervor unequaled by the elders it once scorned.

And, of course, Wainwright–whose sole commercial success was the 1972 Top 40 novelty hit “Dead Skunk”–accomplishes all of this with tongue often planted firmly in cheek.

“Who but Wainwright, in the title song, would use estrangement from humanity as a pickup line?” pondered music writer Pamela Murray Winters in the folk magazine Dirty Linen. “Perhaps an artist with Wainwright’s curiosity and self-satisfied wit could have turned out some sort of noose-worthy killer of a disc, but he took care–and time–to create a fully realized vision, not merely a pity party.”

There is no doubt that Wainwright–who brings his one-man show to the Mystic Theatre on Feb. 2–has led a life that begs to be told in song. The son of a Life magazine writer and editor, Wainwright grew up in an affluent Westchester County home outside of New York City. In the ’60s, he became a folk singer and established his clever and frequently confessional style with Album I, his 1970 debut on Atlantic Records.

His songs have been recorded by Johnny Cash, Fairport Convention, Kate McGarrigle (Wainwright’s ex-wife), and son Rufus Wainwright (immortalized as an infant on the 1974 song “Rufus Is a Tit Man”), among others.

Meanwhile, he’s had modest success as a stage and TV actor as well. Wainwright, who now portrays the born-again frat-boy dad on the Fox-TV sitcom Undeclared, appeared off-Broadway in Pump Boys and Dinettes and had a recurring role as Captain Spalding on the M*A*S*H* television series. He’s also popped up in the films 28 Days, Jacknife, and The Slugger’s Wife.

But it is the clear-eyed emotional depth of Wainwright’s songs that has coalesced a cult following. Even his most humorous songs can be touching–for instance, “Tonya’s Twirls” (first recorded for National Public Radio and compiled on 1999’s Social Studies album) offers a sympathetic spin on the maligned Olympic skater.

And just as the recent death of his mother inspired Last Man on Earth, his best album to date, the death of his father a decade earlier served as the catalyst for 1992’s History, a critically acclaimed set of reflective ballads and satirical barbs praised by the All Music Guide as a masterpiece of power and poignancy.

The new album is another masterwork, from the wistful humor of the opening track (“Missing You”) to the achingly sad homage to his late mother (“Homeless”) that closes the set.