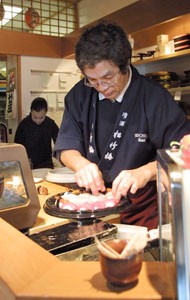 Sushi and beyond at Santa Rosa’s Yao-Kiku

Yao-Kiku is lively tonight. Settled into my favorite little table, the one under the crazy, colorful painting of the sword-wielding Samurai pool player, I curl my cold hands around a flask of boiling sake and watch the action.

The small sushi bar, which is presided over by owner Sam and his adept fish-slicing, rice-molding team, curves around one side of the dining room and is decorated with Japanese dolls and other knick-knacks. It’s always a prime location for entertaining diners.

Tonight, a group of four Japanese men are perched on the high bar chairs. They intersperse mouthfuls of gleaming raw fish sashimi with raucous laughter and slugs of premium chilled sake.

A fawning couple at a nearby table order the una-ju, eel with special sauce served on rice. According to Japanese lore, unagi (eel) builds stamina. It’s eaten during the hottest months to avoid exhaustion, and anytime as an aphrodisiac. Hmm, maybe this pair is on to something.

At another table, a family introduces their young-uns to shrimp tempura. The kids munch and crunch happily, wielding the batter-dipped tidbits like french fries.

Yao-Kiku is a comfortable neighborhood joint tucked away in the heart of a strip mall on Santa Rosa’s Yulupa Avenue. The restaurant’s reputation for using the freshest ingredients, sometimes flown in from Japan, keeps customers coming back for more.

The partly screened dining room is small, orderly, and minimalist. It’s decorated in shades of gray and burgundy. Plain tables are set with wooden chopsticks in paper packets and burgundy linen napkins.

The service is gracious and attentive. If you drop a chopstick or run out of sake, someone usually notices right away.

A meal here usually commences with a bowl of steamy, fortifying miso soup and a green salad (both included with the dinner entrées, along with steamed rice). Yao-Kiku’s miso is a great version of the Japanese staple and is enlivened with cubes of tofu and strips of seaweed lurking at the bottom.

The salad is a pile of chilled, crisp Sonoma greens and carrot pieces with tangy dressing that tastes of mirin, a rice wine vinegar.

Appetizers are a bit hit-and-miss. The gyoza ($6)–Japanese-style pot stickers–are tasty and generously filled with minced pork and veggies. But the chicken tatsuta ($7), boneless chicken bits marinated in ginger sauce, is covered in too much batter and is a disappointment.

But things get back on track with the hamachi kama ($8), broiled collar of yellowtail. Use your chopsticks to poke around the nook and crannies for sweet morsels of this dense white fish that’s reminiscent of swordfish.

Yao-Kiku offers a limited, reasonably priced wine list, but many diners opt for the hot or chilled sake or a Japanese beer.

Another great choice is the salmon teriyaki ($16). A generous portion of tender, pink salmon glazed with a slightly gingery teriyaki sauce comes with starch galore–noodles, rice, and roast potatoes. I’ve sampled the salmon teriyaki in at least four other local Japanese restaurants, and Yao-Kiku’s version wins hands down.

Of course, many raw fish addicts come here for the superior sushi. And if you know your aji from your ebi and uni (Spanish mackerel, prawn, and sea urchin) this place is for you. Yao-Kiku serves a broad selection of both maki (rolled) sushi and nigiri (wrapped or layered) sushi.

More unusual sushi choices include herring eggs, giant clams, pickled plum and leafstick, and pickled Japanese radish. At one time the restaurant served a refreshing aloe vera sushi, but I haven’t seen it here in a while.

If you have room for dessert (I never do), there’s green tea or mochi (short-grained glutinous rice) ice cream. With the check come sections of fresh orange, and also some intensely flavored coffee candy, a very weird choice after sushi.

Still, Yao-Kiku is a consistently great place for a relaxed, informal neighborhood meal. Give it a try (but note that they don’t accept personal checks).