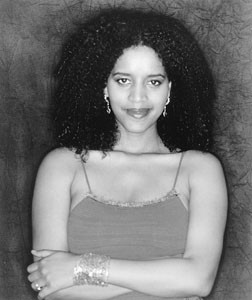 During the past couple of years, 19 Broadway–the little Fairfax nightspot with big ambitions–has played host to an impressive array of jazz, blues, and world-music artists. On Feb. 6, the club presents the North Bay debut of Gigi, the red-hot Ethiopian singer whose self-titled CD on the Palm Pictures label topped New York Times music critic Jon Pareles’ list as the best obscure album of 2001!

The result has prompted an outpouring of rave reviews.

“With a single bold stroke, Gigi stands as the most important new African singer on the scene today,” opined Afropop Worldwide.

But why stop there? The great sounds of world music continue at 19 Broadway on Feb. 7 and 8 when Thomas Mapfumo–the Lion of Zimbabwe–takes the stage with an astounding band that captivated a Mystic Theatre audience last year. He’s followed Feb. 14 by Jamaican singing legend Carlton Manning (a major influence on the ’60s rock-steady bands), Feb. 24 by African reggae star Majek Fashek and the Prisoners of Conscience, and Feb. 26 by Grammy-nominated Jamaican reggae artist Tony Rebel.

Meanwhile, blues hounds and ’60s rock fans may want to stop by 19 Broadway on Feb. 5 to check out former Blues Project flutist Andy Kulberg and drummer Roy Blumenfeld when they team up with powerhouse blues guitarist Ron Thompson.

Random Notes: Of course, the big news in February is that David Byrne–culture vulture of immense proportions or pop music’s most ardent supporter of world music, depending on your viewpoint–brings his Look into the Eyeball tour to the Luther Burbank Center in Santa Rosa on Feb. 12.

In the next few weeks, San Rafael’s Marin Center will feature a pair of breathtaking acts from China: the Peking Acrobats (Feb. 2) and the Shoalin Warriors (March 9).

Cajun music heavyweights Beausoleil with fiddler Michael Doucet perform Feb. 9 at the Mystic Theatre in Petaluma, and the Wild Magnolias whoop it up there on Feb. 17. Doucet later returns to the Mystic on April 11 with the newly formed Fiddlers 4, featuring fiddlers Doucet, Darol Anger, and Bruce Molsky, and cellist Rushad Eggleston.