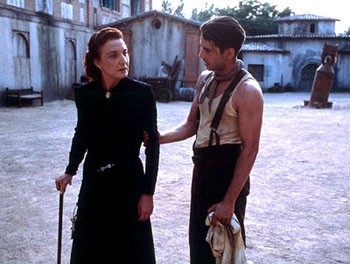 The Spaniards and the Mexicans excel at ghost stories–how could they not, with their histories? And they’ve been making a lot of them for American filmgoers of late: for example, take last year’s The Others, Alejandro Amenábar’s entertaining tale of a traumatized war widow (Nicole Kidman) confronting a gothic mansion.

The culmination of the fascist triumph in the Spanish Civil War is at hand, symbolized by an unexploded bomb standing sentinel in the middle of the courtyard, a dud dropped from one of Franco’s planes.

A political refugee kid (Fernando Tielve) arrives, and the lonely boy is soon visited by the school’s ghost, nicknamed the Gasper, a phantom whose ectoplasmic blood still leaks into the air around him.

Those who may know about the ghost’s history but aren’t talking include a kindly, widowed, one-legged teacher (the handsome Marisa Paredes, from Almodóvar’s All About My Mother), a thieving fascist handyman (Eduardo Noriega), and Casares (Federico Luppi), a civilized but impotent old poet and science teacher.

Because of wartime scarcity, Casares drinks the alcoholic broth from the biology lab’s “pickled punks,” to use the carny parlance, meaning the bottled bodies of stillborn infants. One of the dead babies is a spina bifida case, hence the film’s striking but essentially irrelevant title. For what it’s worth, the white-haired professor calls his drink “agua de limbo.”

While The Devil’s Backbone is full of oddity, style, and atmosphere, it is–at first–so classical that it’s stiff. Then the gradual rise in brutality inundates the picture, alienating those drawn by the mood, the eeriness of the Gasper, Paredes’ air of secrecy, and the J. G. Ballardish sight of the rusty, totemic bomb threatening the school.

Unique, certainly, but maybe just too gory for poetic horror and too poetic for gore.