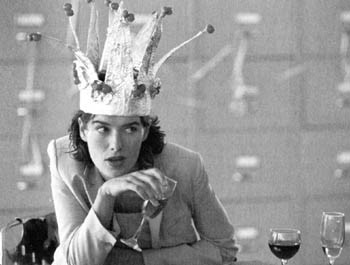 Nice Drunk: Lena Headey is good at being bad in ‘Aberdeen.’

Scots on the Rocks

It’s another attempt to graft a Hollywood plot onto a foreign film, but the audience for the Scots/Norse import Aberdeen may end up rejecting this transplant. Having just celebrated her birthday with co-workers at the London law firm of Boring, Dull, and Obese, Kaisa (Lena Headey) receives an urgent phone call from her mother in Aberdeen, Scotland. The woman (Charlotte Rampling, prostrate throughout) is in extremis, with a very movieish case of cancer.

The ailing mother urges her daughter to get in touch with her long-estranged dad, Tomas, an oil-rig worker living in Norway. Tomas turns out to be Stellan Skarsgård, here playing “a useless piece of shite,” a hopeless drunk marinated in Famous Grouse scotch.

In Norway, we begin the usual familiar machinations of a road movie/family reunion film, the kind of picture that’s been floating around ever since Rain Man. First the airlines won’t let the ornery Norse souse fly; then it turns out the ferries don’t run directly from Bergen to Aberdeen; next, the rental car gets a flat tire. . . . You know the drill.

What works in this father/daughter reunion picture goes beyond the reasons for the journey itself, a trip that takes the long way around the edge of the North Sea. Where Aberdeen differs–or is, at least, even worth considering–is in its raw scenes depicting the confused, irritated feelings between Kaisa and her parents. There are quasi-incestuous notes here, only inflamed by Headey’s frequent topless moments.

However, the fierceness Headey brings to her role is far more authentic than the character she’s given to play. Though the film tries to underscore Kaisa’s troubles by giving her a drug problem, we could tell this was a seriously troubled woman already without her resorting to a seemingly bottomless bag of cocaine.

And not even all that blow really explains the unlikelihood of her pouncing on her dad, who is usually literally dripping with booze or puke or both. (Skarsgård, who often has the haunted culpability that made Joseph Cotten so fascinating on screen, overplays it here. His drunkenness starts to turn into a temperance cartoon. You miss the restraint of the late Foster Brooks.)

That said, there are quieter, convincing moments–for instance, the Bukowskian scene where Tomas transfers whiskey into a plastic apple juice bottle, the cold poignancy of which act is reflected in the setting: the empty, littered parking lot of an English truck stop at dawn. Behind him, a billboard advertising a Jet Ski screams: “Wet Your Pants” (which, inevitably, Tomas does).

Or the scenes with Clive, played by Ian Hart–the man with the most trustworthy ears since David Janssen–a gentle Liverpool truck driver who picks up the pair after they’re stranded with a flat. Hart’s solid decency, a drag in some films, is a cool contrast to the squabbling, self-destructive father and daughter.

Director Hans Petter Moland is instantly revealed as a former director of TV commercials from the way he solidly pegs the setting so you can read everything about the scenes and the people in them at a glance. That’s not bad, but what follows is: The scenes stay “read” even to the point of cliché–nothing changes or surprises.

Moland works from the Scandinavian cinematic custom of cutting away abruptly in mid conflict to the aftermath of the fight. Scandinavian film is customarily heavy on words unsaid. By contrast, Hollywood brutally spells everything out. Rather than having these two drastically different styles meet in the middle, what results in Aberdeen is a film of unusually wobbly tone.

But ultimately, the Hollywood side wins: By the time this movie is through, the air between father and daughter is so clear you could fan it into an allergy ward.