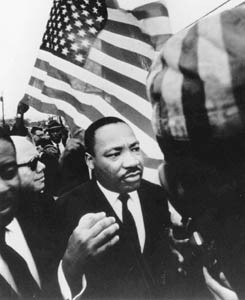 More Than A Dream: MLK’s radical legacy shouldn’t be whitewashed.

On Jan. 15, Dr. Martin Luther King, Jr. would have turned 72. If he had survived. And in every conceivable sense of the word, he has not. At least, not in white America.

In many ways, Ronald Reagan did the worst possible thing for the memory of Dr. King by acceding–reluctantly–to the holiday that bears King’s name. Because the holiday has become a feel-good lie.

King is, along with Mahatma Gandhi, one of the two most revered symbols of nonviolence in the 20th century. He spent his too-brief adult life defying authority and convention, citing a higher moral authority, and giving hope to people of color seeking liberation on six continents. MLK Day, the holiday (observed on Jan. 21), has only made new generations of white people mislearn King’s story.

King is not a legend because he believed in diversity training and civic ceremonies, or because he had a nice dream. He is remembered because he took serious risks and, as the Quakers say, spoke truth to power. He is also remembered because, among a number of brave and committed civil rights leaders and activists, he had a flair for self-promotion, a style that also appealed to white liberals, and the extraordinary social strength of the black southern churches behind him.

What little history TV will give us in the next week or so is at least as much about forgetting as about remembering. It will flaunt self-congratulatory patriotism that King was American, but it will skip real self-examination about the American racism that made him necessary and how our government, at every level, sought to destroy him. We hear “I have a dream”; we don’t hear his powerful indictments of poverty, the Vietnam War, and the military-industrial complex.

We see Bull Connor in Birmingham; we don’t see arrests for fighting segregated housing in Chicago. We don’t hear about mainstream America’s contempt at the time for King and his reputation among conservatives as a Commie dupe. We don’t see retrospectives on his linkage of civil rights with Third World liberation. We forget that he died in Memphis lending support for a union (the garbage workers’ strike) while organizing the multiracial Poor Peoples’ Campaign that demanded affordable housing and decent paying jobs as basic civil rights. We forget that many of King’s fellow leaders weren’t nearly so polite. Cities were burning. We remember Selma instead.

And we forget that of those many dreams King had, only one–equal access for nonwhites–is significantly realized today. And nearly a half-century after the Montgomery bus boycott catapulted a 26-year-old King into prominence, even that is on shaky ground.

We rarely acknowledge that the overt racism of Montgomery in 1955 is no longer so overt, but still part of America in 2002. It shows up in our geography, in our jails, in our voting booths, in our shelters and food banks, in our military, and yes, in the very earnest and extremely white activist groups that still carry the banner on these issues.

In 2002, TV land’s MLK has no politics. And, for that matter, no faith. If the King of 1955 or 1965 were alive today, he would be accused of treason for his pacifism, as he was reviled for “Communism” then. Instead of the FBI vainly trying to bring him down, he, and most of his associates, would be prosecutable under new antiterrorism statutes.

And the moral outrage of Americans that made his work so effective? We don’t do that anymore. A couple of months ago we nearly starved millions of Afghans to death–instead of the few hundred thousand dying at the hands of U.S.-backed warlords today–and virtually nobody even noticed, let alone cared, in this country. It’d take a whole lot more than police dogs to make the news today. Ask any global justice demonstrator.

Instead, for white America, King’s soft-focus image often reinforces white supremacy. (See? We’re not so bad. We honor him now. Why don’t those black people just get over it, anyway? We did.) Dr. King, a nonviolent martyr to reconciliation and justice, has become a Hallmark card, a warm, fuzzy, feel-good invocation of neighborliness, a file photo for sneakers or soda commercials, a reprieve for post-holiday shoppers, an excuse for a three-day weekend, a cardboard cutout used for photo ops by ungrateful Supreme Court justices.

He deserves better. We all do.

Geov Parrish writes for WorkingForChange.com, where this article originally appeared.