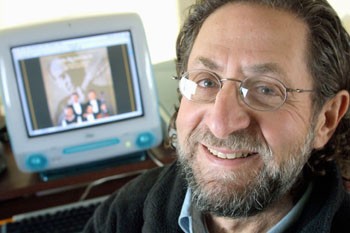 ‘Los Romeros: The Royal Family of the Guitar’

Chayes and professional partner John Harris had already made one successful movie, the PBS documentary Divine Food: A Hundred Years in the Kosher Delicatessen Trade, and were eager to make another when Harris–a retired Berkeley cookbook publisher, author, and guitar aficionado–mentioned the Romeros.

“When John started telling me these amazing stories,” Chayes says, “the whole Romero family history, their artistic accomplishments, their place in the music world, I said, ‘John, that’s got to be a great film.'”

What got Chayes’ cinematic pulse racing was the story of Celedonio Romero, a poor Spanish guitar teacher who fled the oppression of fascist dictator Francisco Franco and ultimately won fame and fortune in America as the founder of the world’s first classical guitar quartet.

Romero and his three sons, Celin, Pepe, and Angel–all guitar virtuosos of the highest order–became a phenomenon in the early ’60s and ’70s, bringing classical music to a popular audience. The story even has a fairy-tale ending, with Celedonio–and later his three sons–being awarded an honorary knighthood by the king of Spain.

“An amazing group of people,” says Chayes, who works as a curator at the Judah L. Magnes Museum in Berkeley. “Very charismatic. The reason they became so popular in the ’60s was that they brought a flair to the popular stage that hadn’t been there previously. They broke the rarefied air of the classical oeuvre. They broke down the barrier.”

Though Celedonio passed away in 1996, the quartet lives on through Celin and Pepe and includes grandsons Celino and Lito. Angel, who departed the quartet to pursue his own career, is now a renowned symphony conductor. Taken together, the Romero family has produced more than a hundred records and CDs, and continue to perform on concert stages across the globe.

“The Romeros were a phenomenon,” says Chayes. “And they still are. They perform hundreds of concerts a year and are treated like rocks stars in Spain, in Asia, all around the world.”

Harris and Chayes soon learned that KPBS, a public television channel in San Diego–where the Romeros have lived since emigrating from Spain–had once been keen to produce a Romeros documentary, but the project had never made it off the wish list.

With Chayes and Harris eager to make the film, interest at KPBS rekindled, and the station struck a coproduction deal with the two filmmakers.

The most important element of the production, of course, was the Romeros themselves. Fortunately, Harris had already formed an alliance with Angel Romero, from whom the filmmaker had purchased some guitars–“Angel has one of the best guitar collections in the world,” Harris points out–and the whole family soon signed on to the project, inviting Chayes and Harris into their lives for over a year.

“If they’d turned out to be dull people,” Chayes remarks, “the film wouldn’t have worked. Happily, the Romeros are not dull people.”

“They all exude a kind of authentic Andalusian charm,” adds Harris. “This is a very physically demonstrative family. There are more men kissing each other in our movie than in any film ever made.

“As a guitar aficionado myself,” Harris continues, “it was heaven to have such prolonged contact with this family.” They describe the elaborate guitar swapping parties, guitaradas, that are a common occurrence in the Romero household, a prelude to any family business.

“For the Romeros,” says Harris, “doing a deal is a complex ritual that involves days of partying, a definite social process within the Romero family. They play each other’s guitars and pass them around, guitars costing $100,000 or more apiece!”

“That’s the way it is around their house,” agrees Chayes. “At any moment, someone might pick up a guitar and start playing this fantastic, world-class music.”

Aside from the Romeros’ own home movies, such family rituals had never been filmed until Chayes and Harris were allowed into the Romero’s home. As the film project progressed, the family of musicians grew increasingly comfortable with the film crew tagging along and began suggesting new adventures on which to bring the filmmakers.

“The film had an outline,” says Harris, “but some of the things that happened during the filming were totally unexpected. The three sons being knighted by the king of Spain was not something we knew was going to happen, until they sprang it on us.”

Likewise, a trip to Celedonio’s birthplace of Málaga, Spain–where a plaza was to be dedicated in the guitar legend’s name–was mentioned at the last minute. “That almost ended the project,” Harris admits. “At first, KPBS didn’t want to come up with the money to take the production to Spain. But we insisted. We said, ‘How can you make a film about this family and not go to Spain?'”

Ultimately, over 30 hours of film were whittled down to a spare 55 minutes. The result, Los Romeros: The Royal Family of the Guitar–which has already aired on KCBS and a handful of other public television stations–will have its national unveiling soon. The originally scheduled date of Sept. 14 was canceled due to the events of Sept. 11.

For those unwilling to wait, the film is already available in video form on the KPBS website (www.kpbs.org), as well as on www.guitarsalon.com and www.peperomero.com, and will soon be available through Amazon.com.

The finished film is as musically exhilarating as it is sweet and inspiring. While the movie does hint at the Romeros’ volatile personal quarrels–including Angel’s still painful exit from the quartet–Los Romeros keeps its focus on the family’s strengths.

Chayes is now on to his next project, also music related. The Right to Sing–which he is making with filmmaker Karen Robbins–tells the story of the political protest songs of the ’60s and will feature interviews with Arlo Guthrie, Pete Seeger, Bob Dylan, and Joan Baez.

As for Harris, he’d like to make another movie about the Romeros.

“I miss making the film,” he confesses with a soft laugh. “I miss them. They live in a little Spanish bubble in America. When you go into that bubble with them, you are transformed.”