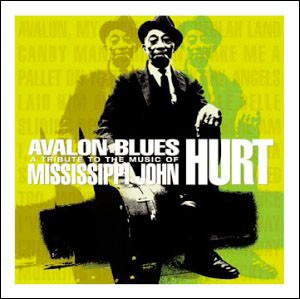 “It was 1968. I was 13 years old. I’d been going through the shelves of the record collection at the local library, looking for some music that would change my life,” producer Peter Case recalls on the liner notes to Avalon Blues: A Tribute to the Music of Mississippi John Hurt (Vanguard), reminiscing about his first encounter with the gentle blues of the legendary Delta musician. “I guess I found it.”

Thirty-three years later, Case–now a respected singer and songwriter in his own right–has returned the favor, bringing together an all-star lineup to celebrate the music of a man that influenced two generations of acoustic folk and blues guitar players.

The roster on this homage to the late Mississippi blues guitarist and singer–known for his precise fingerpicking, gentle ballads, and restrained vocals–reads like a who’s who of American roots music: Taj Mahal, Lucinda Williams, Dave Alvin (in a stellar duet on “Monday Morning Blues” with Case), Steve Earle (who puts the grit back into “Candy Man,” the ode to backdoor lovers), Ben Harper, Alvin Youngblood Hart, Chris Smither, Bruce Cockburn, Gillian Welch, John Hiatt (with a heartfelt solo acoustic version of “Satisfied”), Geoff Muldaur, Bill Morrissey, Victoria Williams, and even the chameleon Beck work their way through 15 tracks that are a fitting tribute to one of the most accomplished performers of the ’60s folk-blues revival.

On Dec. 6, Case, Alvin, and Morrissey bring the West Coast leg of their Avalon Blues Tour to the tiny Sweetwater in Mill Valley for a highly anticipated performance of Hurt’s songs.

The fuss is well deserved. Among Delta bluesmen–known for their wailing vocals and tortured guitars–Hurt was an anomaly, possessing distinctive vocal and fingerpicking styles.

In his book The Best of the Blues: The 101 Essential Albums (Penguin, 1997), music writer Robert Santelli notes, “Of all the Mississippi blues figures who recorded in the late 1920s, it was John Hurt. . .whose music was the most comforting. Charley Patton and Son House sent shivers through a listener with their vinegary voices and combustible guitar styles. Skip James sang with an eerie, haunting falsetto. But Mississippi John Hurt had a voice and a fingerpicking style that soothed the soul rather than terrified it.”

In 1928, Hurt cut 13 sides for the Okeh label–powerful ballads of murder, betrayal, and sex–and then fell strangely silent. For decades, he languished in relative obscurity in Mississippi until 1962, when white folkie Tom Hoskins “rediscovered” Hurt, a sharecropper who seldom ventured from his Carroll County home.

During Hurt’s short-lived re-emergence, Bob Dylan, John Sebastian, and a host of other music dignitaries became his disciples. Hurt remained busy until 1966 when he was felled by a heart attack.

“John was not a grandstander as a performer,” remembered John Sebastian, who often played harmonica with Hurt at cramped New York coffee houses. “He wouldn’t seek the audience out, but his warmth just soaked you in. After the first five minutes, you were his. This was different from a performer like Lightnin’ Hopkins, who’d grab you by the collar with his playing and singing.

“With John, it would creep up on you, and you’d go home and think, ‘Did I just hear the genius that I thought I did?'”