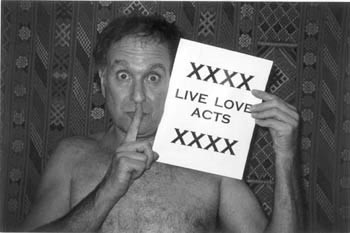 “FUCK ME silly, you bad, bad performance artist!” From any writer-performer other than Fred Curchack, the line would be tantamount to yelling “Fire!” in a crowded theater–a good way of emptying the house. But in Curchack’s brilliant one-man extravaganza Live Love Acts (now playing at Petaluma’s Cinnabar Theater), minutes pass following the line’s delivery as the audience slowly recovers from convulsive laughter.

Inspired by the mythic escapades of libertine lady-lover Don Juan (the legendary swain has been grist for such works as Mozart’s Don Giovanni and Johnny Depp’s Don Juan DeMarco), Curchack’s piece also finds the randy dandy swapping a life in the arts for a wanton tour of womankind before an act of hubris and his naturally unrepentant nature land him in Hell.

In Curchack’s deft retelling of the story, however, Don Juan (referred to throughout as simply “D.J.”) is a solo theater performer who regularly recounts and updates his exploits in a long-running off-off-off Broadway theater piece (he also touts the benefit of “injaculation,” a method of internalizing his orgasms, thereby bolstering his stamina in the sack).

One night, D.J. stumbles into a subterranean strip joint just before the millennial eve and participates in a Grand Guignol-style sex act that leaves a stripper accidentally knifed in the belly. D.J. goes on the lam only to fall deeper into the abyss when circumstances find him bludgeoning a Germanic puppeteer to death with a marionette crafted to look like Scheherazade of Arabian Nights fame.

Eventually, D.J. finds himself involved in a trial in which every woman he has ever slept with accuses him of committing crimes against humanity. The sequence is a wry nod to filmmaker Federico Fellini’s persecution fantasia City of Women and is comically capped by the fact that D.J.’s mother presides as judge.

The circuitous plot has more twists than a French braid, but Curchack conveys the work to the audience with panache and zeal, all the while seated in a minimalist set appointed with only a stand from which he gleans the production’s text. This is no mere recitation, mind you–Curchack is a consummate storyteller and invests the show with every ounce of his considerable talent and acumen as a performer.

Curchack’s delivery often recalls the bombastic zeniths reached by word-slinger Lord Buckley, and many of his gags rely on Monty Python-style hilarious hyperbole as he rages through innumerable sexually explicit vignettes. The rhetorical acrobatics are a phenomenon in and of themselves–Curchack’s fustian slang (a sort of locker-room banter for the Lit Studies set) has little in the way of antecedents apart from perhaps comic George Carlin’s famed faculty for sexual euphemism.

On a tamer note, Curchack describes “love” as a “vampirish mutual admiration society.” He also retreads worn clichés with ribald finesse â la “there was not a dry seat in the house.”

Clearly, Live Love Acts is intended only for mature and, for that matter, open-minded audiences. Kudos are due to the Cinnabar Theater for taking a chance on such bawdy but clever material that ultimately makes a poignant statement about the nature of love.

From the October 28-November 3, 1999 issue of the Sonoma County Independent.