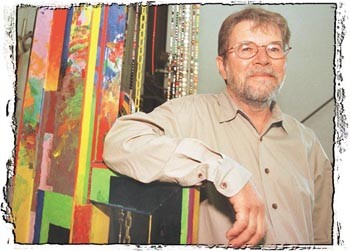 Three of a kind: Robert Hudson creates sculpture, painting, and prints in his Cotati studio. Both his solo work and prints created in collaboration with Richard Shaw and William T. Wiley can be seen at a new exhibit at the University Art Gallery.

IT’S NO MERE CHANCE that three of Northern California’s best-known contemporary artists are once again sharing the spotlight. Robert Hudson, Richard Shaw, and William T. Wiley are longtime buddies (we’re talking decades here) and creative cohorts. Now an upcoming exhibition at the University Art Gallery at Sonoma State University–“Hudson/Shaw/Wiley: Collaborations”–will feature a series of prints created by the trio, as well as individual pieces by each artist.

“It’s a unique opportunity to see these artists collaborating together and to see some newer pieces by each one individually mixed in,” promises art gallery director Michael Schwager. “It should be a really exciting show, [with] lots of things to look at. It won’t be spare or minimal by any means–this will be an explosion of color and imagery!”

These richly layered prints, dense with textured patterns, surreal images, and passages of text, were dreamed up collaboratively in what the artists have described as a creative “free-for-all” at Magnolia Editions, an Oakland-based print publisher, during a six-month period in 1997.

The prints are primarily collagraphs–a technique that allows artists to make unique and complex print images from a wide range of objects adhered to blocks on an etching press–with various other media, such as graphite and collaged elements.

The trio’s history runs deep–all the way back to childhood in the case of Wiley and Hudson, who grew up in Washington State together.

“I’ve known Wiley since the fourth grade in 1948 or so,” says Hudson, 62, who lives in Cotati. “We went all through high school together and attended the San Francisco Art Institute together in the 1960s. That’s where we met Richard Shaw.”

Their bond has been strong throughout the years. Shaw and Hudson recently collaborated on a series of porcelain sculptured vessels, shown at San Francisco’s Yerba Buena Center, that was made during a residency at the Addison Gallery of American Art at Phillips Academy outside Boston.

Shaw and Hudson also recently participated in the media-attention-grabbing exhibit at the Oakland Museum, presented by Wiley and fellow artist Mary Hull Webster and provocatively titled “What Is Art For?,” which bluntly questioned the roles and relationships of museums, artists, and museum-goers.

According to Schwager, the three artists have in the past been loosely connected to the spontaneous, surrealist Bay Area Funk movement. “Although all of them bristle when you bring up whatever ‘ism’ they’re part of,” he observes with a laugh.

Ask Hudson to comment and there is a shade of resentment in his voice. “We’ve been kind of pigeonholed into [the Funk movement],” he says, eager to dismiss the subject. “It’s been hard to deal with.”

Essentially, says Schwager, what all three have in common is a sense of irony and satire in their work. They use puns in their titles and inject some humor into their collaborated pieces, but individually their work is distinct.

Versatile and prominent artist Wiley possesses a Zen-like philosophy (which some have dubbed “dude ranch Dada”) and uses an extensive set of symbols and motifs that has both universal and personal meanings in his work. His art often responds to real-life tragedies and disasters, but he also tends to use puns in his titles. Indeed, Wiley is given to word games and frequently includes texts and stories he’s written within his artwork.

Often, too, Hudson’s creations make references to nature and to Native Americans: “[Hudson] was very inspired by Native American symbols and colors when he grew up,” says Schwager. “But it’s really kind of a hodgepodge of all sorts of things, including sculpture and painting and ceramics–always very colorful.”

Shaw has been identified as a leading ceramic artist. He is a master of trompe-l’oeil illusionism. For example, one of his works features a series of 4-foot-tall walking-stick figures that appear to be entirely fashioned from twigs, sticks, and playing cards–but on closer inspection are actually assembled from clay.

“The three artists have different techniques, but they all share a similar sensibility,” says Schwager. “The collaboration which forms the bulk of the exhibition is a joining of all these different sensibilities, the idea of putting together all sorts of images. What’s interesting is some pieces in the collaboration look truly like a little bit of each of them is in there in equal parts–yet in others one artist’s image dominates, and you can really recognize that maybe one idea started with Richard or Wiley and the other two kind of joined in.”

Hudson, who instigated the SSU exhibit, calls the collaboration a real learning experience. “There are some similarities in our work but also plenty of differences–that’s what made it nice working together because one thing would lead to another thing and then someone would get an idea and we’d just have an open run at the drawings,” he recalls. “We usually had about four or five of them going at the same time.”

The result is a very complex dense overlay of different representations. For example, an intricate piece entitled Diecon, features a skeleton from an anatomy book, various textures and patterns, and hand drawings, amid spatters of color.

Another print features a central image of a Heineken beer coaster, photographs of unidentified folk circa 1935, a collage, a painter’s palette, and a snow scene from Japan that may have come from a postcard.

“These mixtures of images are drawn from various places and put together,” says Schwager. “The different elements don’t have an obvious association–but by the time Hudson, Shaw, and Wiley have finished with them, the pieces end up being quite magical.”

The Girl And the Fig