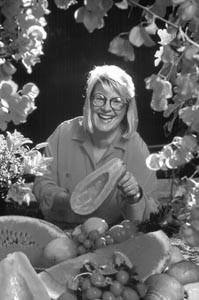 Meatless Mexican cooking for the holidays

I LOVE MEAT. I’d be a failure as a vegetarian. Now, don’t get me wrong. It’s not as if everywhere I eat, a cow must die. I just happen to enjoy an occasional slab of medium-rare juicy joy.

A couple weeks ago, when I obtained a copy of Nancy Zaslavsky’s Meatless Mexican Home Cooking (St. Martin’s Griffin; $15.95), I eyed it rather skeptically. Zaslavsky’s first book, A Cook’s Tour of Mexico, was nominated for the 1996 James Beard Award, and for good reason: her recipes are authentic culinary recordings of the flavorful heritage of Mexico.

From Nov. 11 to 13, Zaslavsky will be participating in a three-day series of workshops and seminars on traditional Mexican cooking methods and recipes at the Culinary Institute of America at Greystone. On Nov. 16, she brings a special presentation of Mexican-style holiday dishes to Ramekins, the Sonoma Valley culinary school. “Mexico, of course, doesn’t have a Thanksgiving celebration, but I’ve chosen some recipes used during the holidays in Mexico to suggest people try out,” she says.

The recipes include both meat and meatless dishes.

Originally from the East Coast, Zaslavsky was brought up in a household full of good cooks, so it was natural for her to experiment in the kitchen. She spent much time discovering international dishes and exploring the cultures from which they came. Zaslavsky moved to Southern California in 1970 and fell in love with not just the area, but the flavor of the fresh, rich Mexican food there.

“There was basically very little and very mediocre Mexican food in New York City. As I kid I can remember eating canned tortillas. . . . Mexican food was just too exotic back there at the time,” she says.

Zaslavsky’s new-found love of Mexican food led her to travel extensively throughout Mexico on quests for authentic culinary delights. The recipes she brings back for her books are given to her by the people she meets, often while in the Mexican marketplaces, while observing their purchases. “I just start chatting with them. At first, they’re in shock, but when they realize how serious I am, they become quite enchanted and flattered that a blonde gringa is interested in what they’re cooking for dinner that night,” says Zaslavsky.

She also has deep interest in what their mothers and grandmothers taught, and how recipes have been passed down in households. Through the recording of these traditional recipes, Zaslavsky is actually playing the part of an anthropologist: compiling cultural and family histories. The people she meets are quite receptive and happy that their family dishes are being written down–often for the first time. “Often times I’m invited into people’s homes to try their dishes and watch them prepare a meal,” she says. “The best part about doing this has to do with the friends I’ve made over the years. The Mexicans are such a warm and receptive people; I always feel welcomed.”

THE RECIPES found in the meatless cookbook are authentic dishes you’d find in the various regions of Mexico. Though not a vegetarian herself, Zaslavsky couldn’t help noticing how many of the dishes, particularly of southern Mexico, were meatless.

“I’m really hesitant to call anything I write ‘vegetarian.’ When I hear the word vegetarian, often I think of brown rice and tofu, so meatless to me doesn’t mean that at all,” Zaslavsky comments. “Meatless means having a great pile of spaghetti on your plate and after eating it saying, ‘Hey, I didn’t have any meat!’ ”

Nancy Zaslavsky’s will present “Thanksgiving in Southern Mexico” on Tuesday, Nov. 16, at 6:30 p.m. at Ramekins, 450 W. Spain St., in Sonoma. Events will include a re-creation of a Mexican marketplace. The cost is $45. For details, call 933-0450. For information about the CIA’s “Worlds of Flavor International Conference and Festival,” call 967-1100.