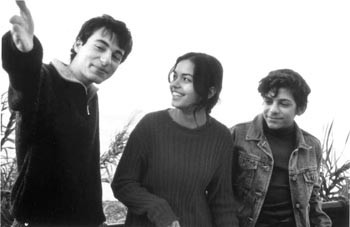 IT IS POSSIBLE to be nostalgic for life during wartime–if you’re lucky enough to have survived it, suggests former Tarantino cameraman Ziad Doueiri. West Beirut, his first feature, ranks as one of the most assured directorial bows in recent years. Set in Beirut circa 1975, the emotionally authentic coming-of-age tale follows two teens, Tarek (Doueiri’s brother Rami) and Omar (Mohamad Chamas) as they navigate their newly divided birthplace. The frequently farcical, often tragic results offer a 3-D primer on the absurdities of war.

Doueiri’s clear-eyed tone is established in the film’s opening scene, in which Tarek creates chaos at the tony French school he attends. As his priggish teacher leads the students in singing the French national anthem, Tarek grabs a bullhorn, climbs the stairs to the roof, and begins singing a patriotic Lebanese song.

On the way to the principal’s office the young rebel watches as a busload of civilians are massacred by terrorists. It is April 13, 1975, and Tarek’s childhood, like the lives of the innocents within his gaze, has just come to an end.

A lesser filmmaker might have had overplayed the boy’s reaction. Doueiri cannily recognizes Tarek’s sheer inability to process what he has just seen. At 14, he is naturally out of touch with the idea of mortality. Instead of panicking, he is coolly nonchalant–it’s almost as though he watched the slaughter on TV. Moreover, war means no school. And to a restless teenager that can only be a good thing.

Freed from his studies, the alternately shy and bombastic Tarek spends his days cavorting with Omar, whose slight stature, incessant smoking, and paranoid nature remind one of a diminutive Ratso Rizzo. The friends engage in universal teenage activities. They listen to records, ride bikes, fall in love with a girl (Rola Al Amin), and ogle beautiful women, particularly Omar’s aunt, an especially lustful specimen. When the pair take covert home movies of her most alluring features, the quest to get the film developed puts them in some dangerous situations.

These include a trip to Zeytuni, the bombed-out nowhere land between the Christian-controlled east and the Muslim-controlled west. Among the rubble is a brothel, and the utter irrationality of war is highlighted by the fact that the house of ill repute operates as a peace zone where johns check their machine guns at the door.

Like many directorial debuts, West Beirut was made on the cheap, a limitation that probably inspired the film’s casual, neo-documentary assembly and contributed to its ragamuffin charm.

It is not a perfect film, however. The ending in particular lacks power and closure. Still, the film’s charismatic performers (many of them non-actors), naturalistic cinematography, and the director’s own admission that the story is “90 percent” autobiographical leave a lasting impression.

Thematically, West Beirut bears a notable resemblance to classics like Truffaut’s The 400 Blows in its portrayal of the spiritual resourcefulness of children trapped by tragic circumstance. This resonance is heightened by Chama’s real-life identity: offscreen, he’s a homeless war orphan.

‘The Widow of Saint-Pierre’