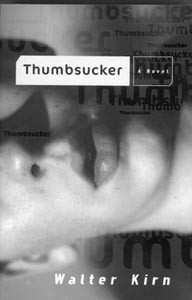 “HERE WE GO again,” mutters the constant reader with a quiet sigh as he or she wades into the first chapter of Thumbsucker. “Here’s another author with another painful story about the agony of adolescence who thinks it’s his job to tell us about it and our duty to listen.”

Surely any reader, constant or intermittent, can be forgiven for approaching Walter Kirn’s latest novel with a jaded eye and a cynical heart. In Thumbsucker (Doubleday; $14), Kirn introduces us to Justin Cobb, a terminally anxious teenaged oral compulsive who moves from sucking his thumb to finding far worse things to stick in his mouth. Caught without shelter in the fierce storm of adolescence, our beleaguered narrator weathers sexual angst, family dysfunction, and drug experiments gone awry.

If any of this sounds familiar, it’s probably because there may be no period of life more closely examined in contemporary fiction than the troublesome years between Little League and our first trip to the bar or the ballot box. The coming-of-age novel has been transformed from a classic form to an industry standard, with all that implies–quick turn-around, shoddy workmanship, and relentlessly familiar contents.

To make such a work stand out, an author has to take his book off the assembly line and imprint it deeply with his own personality. To his credit, Kirn has done just that: the novel’s greatest strength is the author’s idiosyncratic sense of humor, sly yet somehow innocent, light as a kiss from a dying man and just as morbid.

In Thumbsucker, as in real life, part of growing up is making the disturbing but entertaining discovery that everyone around you is at least mildly insane. The book’s protagonist encounters events like the “Muscular Dystrophy Fun Fair” and watches driver’s ed films like Death Drives Ninety. Everyone Justin meets has bizarre advice to offer, from the light-fingered manager of the gas station where he works (“I like your honesty. Leaves twice as much for me”) to the Mormon missionaries who come knocking on his door.

The narrator’s oral compulsive nature becomes a metaphor: Not only does everyone want to tell Justin how to live; they all want to put something in his mouth–his dad’s raw deer meat, his dentist’s Ritalin, his quasi-girlfriend’s pot. Usually, he sucks the offered object down out of need and fear.

Chief among his tormentors (and easily the most vivid character in the book) is Justin’s father, Mike, a wounded jock with a taste for blood who manifests a repellent combination of brutality and vulnerability. Heading for a mental breakdown, he comes off as driven yet helpless, abusive yet deeply interested in bonding with his son. He cuts Justin’s hair with a Swiss Army knife. He tries to cure the titular thumbsucking with hot pepper on the offending digit. Above all, he tries to infect his boy with his own pathological competitiveness.

A friend of the family suggests to Justin that someone should tell his dad the news: “It’s the nineteen eighties. The West’s been won.”

But dad is also the funniest person in this book–albeit unintentionally: “I try not to go by averages,” he sagely advises his son. “Averages, a wise man told me once, are usually an excuse for something.” Shoplifting, he explains another time, is driving up the price of milk. They shoplift milk? his son asks. “They shoplift everything,” Mike replies. “Milk is where they recapture the lost profits.”

But while Thumbsucker has a sense of humor and some compelling characters, there are some profound weaknesses here. Not only does the novel mostly cover well-trodden ground, but many of the author’s attempts to take us into new territory feel unduly contrived.

Obviously, Kirn isn’t aiming for strict realism, but it’s hard to take his narrative too seriously when it keeps veering deep into a Twilight Zone. His narrator has close encounters with celebrity actors, discovers that his boss has burned down the gas station to collect insurance money, and watches his middle-aged dentist change from an easygoing hippie into a patriotic National Guardsman. Often, the author’s uncontrolled taste for the absurd takes the edge off his story.

Still, there’s much to like about Thumbsucker, especially its main character, poised on the brink of adulthood but far from sure that he wants to jump over the edge. And maybe Justin’s dilemma explains why coming-of-age novels keep popping up on the shelves: Who among us hasn’t wanted a second shot at that particular leap of faith?