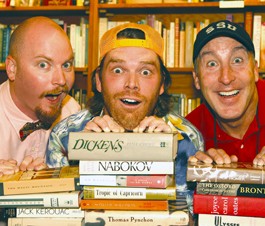 The Rep rips into another 'reduced' epic

A crowbar has fallen out of Dodd’s Delzell’s backpack.

On a recent Saturday afternoon, as actors Keith Baker, Chad Yarish and Delzell gather at the Sonoma County Repertory Theater in Sebastopol to rehearse the upcoming show All the Great Books (Abridged) , a heavy crowbar slips from Delzell’s bag and clatters to the floor with a loud crash. There is a short pause, as everyone stares at the crowbar, each man trying desperately to come up with the first joking response.

“Yeah,” he says, “I was just doing a few extracurricular house burglary jobs before rehearsal. Don’t pay any attention to that.”

In truth, the crowbar has to do with a do-it-yourself plumbing job Delzell’s been doing at his house, but it stands as a nifty example of this trio’s attitude after spending the last several weeks immersed in the world of Great Books, a “reduced” comedy by Reed Martin and Austin Tichenor, creators of The Complete History of America (Abridged) and The Bible: The Complete Word of God (Abridged) . As the play gets ready to open this weekend, Delzell, Yarish and Baker have become focused on one thing: how to make a joke out of everything that happens.

“It’s nuts. It’s overwhelming, but it’s a lot of fun,” says Baker of his first appearance in a “reduced” show, this being the fourth such show presented by the Rep under the direction of Jennifer King. “This kind of comedy is pretty much the polar opposite of the serious dramatic stuff I’ve been working on lately,” he says. “This is a true comedy, nothing but laughs for an hour forty-five.”

“This being my second ‘reduced’ show,” says Yarish, who appeared in the Rep’s version of the Bible show two years ago, “it’s great to be getting back into it, just running around and laughing like an idiot. I feel like maybe I’m getting the hang of it now. I certainly know what to expect from the rehearsal process, I know we’re going to be running nonstop for three hours a day until the show opens, and then I’m going to be running nonstop for an hour and 45 minutes every day until the show closes.”

The “reduced” shows tend to have extended runs when they play at the Rep. In preparation for the very real possibility of a held-over run, all of the actors have been asked to keep their schedules open for the next several weeks. Just in case.

“The first time I directed one of these shows,” King interjects, “it was the Complete Works of William Shakespeare (Abridged) . I learned pretty quickly that with these shows, it’s more like doing choreography than like directing. It’s one big comedic dance.”

In this one, a trio of high school teachers—the coach (Delzell), the professor (Yarish) and the student teacher (Baker)—attempt to give a crash course in English literature by bringing to life 86 of the greatest books ever written. Asked if the performers have learned anything about literature while working on this show, Yarish is the first to jump in.

“Yes! Yes, I have,” he says. “I’ve learned that I don’t need to read Henry David Thoreau’s Walden now, because apparently, it’s just a big boring book about fishing.”

“What I’ve learned,” says Baker, “is the weird, personal way in which most people view literature. People all around the world will say, ‘Ulysses, right, by James Joyce, yes, great book!’ And yet no one has actually read it. They just know that it’s long, it’s unintelligible and it’s about some Irish guy. But that’s enough, and that’s all we need to give you 10 minutes of hilarious theater.”

When invited to mention the novels they most wish had been included in the show, it’s Baker who responds first, but Delzell who gets the funniest joke.

“Catcher in the Rye, ” adds Yarish.

“The Bible,” nods Delzell. “I know that one already has its own show, but as a novel, that’s one funny book.”