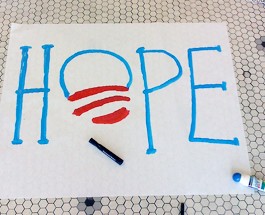 Traditionally, the [Democratic Party] platform is written by paid professionals and then presented to the American people. This year, that’s going to change.

Thirty-three-year-old Sky Nelson is a high school physics teacher turned full-time singer-songwriter. This past weekend, Nelson shared chores with three other activists moderating a Democratic Party platform meeting in Santa Rosa. Theirs was one in a multitude of such gatherings organized by thousands of volunteers, which were held across the country over the past two weeks.

Political platforms articulate the shared vision of a given party by describing what values its members share, along with what specific actions they intend to take following that year’s election. Constructing and composing these platforms has always been assigned to a high-level platform committee. It’s their job to suss out how the political winds are blowing, especially in regards to partisan constituents. Considerable toil likewise gets expended on wording the platform so as to attract independents and undecideds into the fold.

What’s apparently different this year is an invitation from the Democratic National Committee at presumptive presidential nominee Barack Obama’s behest to include previously unheard voices in the platform-building process. Here in the North Bay, this first grassroots step appeared, for the most part, to have succeeded.

The Santa Rosa platform meeting was hosted by the Yulupa Cohousing Community. Forty Sonoma County residents shared political likes, dislikes and visions. By the end of the two-hour session, they’d hammered out more than two dozen consensus platform planks. Issues involving the economy, foreign policy, the environment, protecting the Constitution, media control and Net neutrality got proposed, rejected or agreed upon. Some thirty agreed-to platform suggestions were then emailed to unnamed national Democratic Party apparatchiks later that evening for consideration and possible inclusion in the party’s ’08 platform. The final platform draft will be presented for delegate approval late this August at the Democratic National Convention in Denver.

“We did a good job of finding common ground and letting everyone speak,” Nelson says of the Santa Rosa gathering. “That was one of our main goals: making sure everyone felt lik they’d been heard and had a chance to express their views.”

While folks were having at it up north in Santa Rosa, a second platform meeting gathered steam out on the sun-dappled patio of North Light Books in Cotati. Sonoma State University psych lecturer Skip Robinson led this conclave. It was attended by 25 persons, most of whom were middle-aged or older and of the Caucasian persuasion. But homogenous or not, Robinson put to good use his skills as a conflict-resolution professional. Lively, engaging and brisk debate led to eight proposed platform planks, each of which garnered at least 16 of the 25 possible votes, with over a dozen other planks endorsed by majority support.

Top issues for those attending the Cotati confab were war, torture, supporting the United Nations, nuclear disarmament, single-payer healthcare, the environment, the nation’s growing wealth disparity and inequitable foreign trade agreements. On the corner of the whiteboard up front was scribbled, “No nuclear nuthin!”

A third platform meeting was held later that same day, at Coffee Catz in Sebastopol. This group’s final document mirrors issues hashed out by the two previous groups, but this assemblage did have its heated moments, the 90-plus stifling degrees inside notwithstanding.

The Obama ’08 website includes a “local platform process sample agenda.” But volunteer hosts were encouraged to design meetings as each personally saw fit. Simply by walking in, it was obvious that the Sebastopol meeting organizer, library arts researcher Richie Partington, had put earnest prep time into constructing his session. But the best-laid plans can collide with reality. Much of the two allotted hours was given over to the host reading and sometimes defending his own 17 paragraph-length platform planks. Grassroots democracy, however, can be messy as mud, and those assembled did voice their displeasure. But objections aside, Partington ultimately sent a far-reaching 25-point list of platform suggestions to the Obama camp later that evening.

The Obama ’08 website states, “Supporters like you have opened up the political process like never before. But now you can do even more. You can write the next chapter in the history of the Democratic Party.”

Really? Sky Nelson believes so. “My personal opinion is that they’re trying to get the public more involved, and my strong feeling is that from all the correspondence from people in the Obama campaign and all of the follow-up over the last eight months is it’s a lot to be doing. This is a chance for the people to get involved, but it’s not neccesarily going to be run perfectly the first time. Their intention is genuine, that they want to get public opinion and they want this to be the peoples’ platform.”

Groups across the land have led to chapters submitted for platform consideration. The question now becomes: who’s reading these chapters, what considerations will they be given—and precisely how’s all this hard work being compiled? Is the DNC truly listening to America, or is it barking up a feel-good carnival attraction filled with smoke, mirrors and empty rhetoric? Only time, and Mr. Obama, will tell.