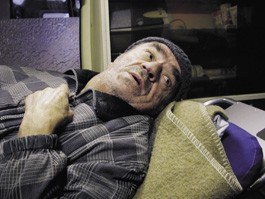 A quote for the year in movies: “Honesty is not synonymous with truth.” That’s Vera Farmiga’s Madolyn in that two hour-plus game of liar’s poker, . Like that Scorsese film, 2006’s cinema was a liar’s carnival. Who was the most popular film hero of the year? Probably , no fan of the truth himself. (“Hello? Pirate.”)

In the best 10 of the year, as well as in many other of the noteworthy films of ’06, we see a roster of pranksters, double agents, spinmeisters and illusionists.

Perhaps stories of liars are natural for cinema, which is itself a lie really, a blank screen eclipsed by a speedy procession of still images. But perhaps also this year’s special emphasis reflects a society where truth is so valuable that it’s rationed. Among filmmakers, we see a growing cynicism, reacting to lies in all their forms–lies of omission, lies of exaggeration and, of course, the bald-faced, breezy, smiling lie. If cinema celebrated liars, it never exalted them as much as public life did. “Hello? Politician,” as Capt. Jack might say if he were kicked upstairs.

The top 10 are in boldface and in no particular order and include a couple of films that haven’t yet opened in the area.

‘The Death of Mr. Lazarescu’ The con man of the year, , proved that subtitles don’t have to sink a film’s chances. And medical shows are as popular now as they’ve ever been. So even though this film had “death” in the title, and even though it was in Romanian, it was a gamble that local exhibitors should have taken. One finds a shock of recognition in the nightlong effort of a dying man to get to the hospital. Anyone who has burned with exasperation while trying to outwit his HMO might find some solace in the story of the martyrdom of St. Lazarescu.

Reengineering the film noir for the age of the pastel-hued, morose indie movie was Rian Johnson’s task. And he created a movie every bit as solid as its title. It beats out the fun but overstuffed Departed, Soderbergh’s well-cast but punchless Good German and DeNiro’s foggy , all similar cavalcades of deceivers built on the foundation of film noir. Rian Johnson’s revisit of Dashiell Hammett terrain was worth seeing several times, just to untangle the alibis and double-talk.

‘Notes on a Scandal’ And speaking of revisits to the classics, how about this needle-fine female variation of Strangers on a Train? As a study of dissembling, hypocrisy and scheming, it’s worthy of Richard III (and note the king’s portrait glimpsed onscreen on a school bulletin board).

O rare Nick Naylor! What a captivating artist of distortion. What a living cautionary tale to the credulous who have been taken in by Naylor’s colleagues in the art of bullshitting.

Very funny, with Helen Mirren as her majesty engaged in an effort to ignore the 20th century. And very instructive in how to triangulate a potential political calamity, in those moments where the public suddenly shows its rage at government mulishness.

This film shares a little bit with the above. The hero, Theo, is caught between lying terrorist revolutionaries and a scheming, lethal government. The story may have some resonance to those who want neither Osama nor Bush.

‘Pan’s Labyrinth’ This Goya-themed fantasy, set during the ascendancy of the fascists during the Spanish Civil War, is a story with a similar fork to the one describe above: a little girl, caught between the panicked world of Franco and the arbitrary laws of the underworld.

A pair of magicians engage in a war of violent deception. While this is an entertainment, never–not even in Orson Welles’ day–has there been such a disturbing story of the ruthlessness of magicians.

Chappelle has been known to tell a few lies onstage. More specifically, the scenes of rural Ohio combat the lie that the Red States are places of no culture and no tolerance.

The title says it all. It was a very inconvenient year for truth and truth-tellers.

Finally, a note from the past on the future of movies: “And if you foresee how few years remain before the grandest prospect for a major popular art since Shakespeare’s time dissolves into the ghastly gelatinous nirvana of television, I think you will find the work of this last or any recent year, and the chance of any sufficiently radical improvement within the tragically short future, enough to shrivel the heart. If motion pictures are ever going to realize their potentialities, they are going to have to do it very soon indeed.”

The excerpt is from Phillip Lopate’s 2006 book American Movie Critics, and the passage is from critic James Agee’s film wrap-up for 1944. Replace the comment about television with “podcasts,” and it sums up the danger of cinema being reduced to “downloadable content” gazed over by a distracted watcher as he walks from his car to his classroom. Under such circumstances, only the most glib talking head or the most violent image can survive. Anything that’s really cinema–that’s subtle, that builds with anticipation or tells a story with understatement–is in danger of being literally lost in the shuffle.