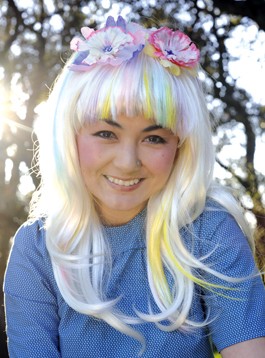 The seven girls are sprawled on couches, gabbing about their favorite bands. Some describe themselves as emo, others as punk, goth or ska. One girl wears red plaid plants, knee-high black boots, a Rancid T-shirt. Another is timid, wearing a plain oversized black sweatshirt and shorts. A soft-spoken girl says she loves to wear costumes, especially tiaras. Instantly, a small blond girl next to her exclaims, “Are you going to make me wear a tiara?!”

This is the first day of Femme Rockage, a free workshop at Petaluma’s Phoenix Theater where young girls can learn from seasoned female instructors how to be in a band, doing everything from playing different instruments to writing their own songs, silkscreening merch and marketing themselves. This one-and-a-half-week summer workshop is just one of the many workshops the Phoenix Theater has to offer at its grandly named Phoenix School of Music. Upcoming workshops are free and open to everyone—an enriching and invaluable resource for the community.

Although different, these girls, between the ages of 12 and 16, all have their love for music and a desire to create their own in common. Some like to draw, some to sing, and one girl has a binder full of lyrics she has written under her bed at home. An eccentric girl, decked out in a turquoise shirt and long skirt, who wants to be a volleyball player, announces, “I usually write songs about how I want people to die, but I think people could really rock out to them.”

After a get-to-know-each-other meeting in the theater lobby, it’s upstairs to the studio, full of guitars, amps, basses and a drum set. The girls scatter and eventually settle down in a circle with instruments in hand. Instructors and local musicians make the rounds to help them set up. The girls plug their guitars and basses into amps; they learn to tune their instruments, and they all sit patiently, anxious to play.

Emily, age 13 but “almost 14,” is at the drum set. She has never played before; she is here because she has “always wanted to play.” Gabby La La, the multi-instrumentalist and touring member of Les Claypool’s band, teaches her a beat. Emily beams and pounds away. The others begin; the room slowly fills with a raw melodic sound, and their first Femme Rockage jam session has begun. Their bodies start to loosen with the music, their serious mouths stretch into grins. A quiet redheaded girl standing slightly to the side comes closer and starts to sing a melody. It all works, and the band digs it.

Downstairs, music is coming from backstage. The Lipstik Prophesees, another Femme Rockage group, is rocking. In unison, they start playing the Ramones’ “Blitzkreig Bop,” which melds into Nirvana’s “Smells Like Teen Spirit.” When finished, the girls are thrilled, smiling and let out a chorused “Yeah!” They seem elated from playing these songs, but the atmosphere becomes serious. The instructors invite them to talk about creating their own music while using songs like the ones they just played for inspiration. The girls agree and get started on their own sound.

On the agenda for the next day is band T-shirts. The students are instructed to think about logos; instantly four girls eagerly raise their hands. “Ooooh, ooooh, I’m an artist!” one says. “Me too!” interjects another. It’s going to be an energy-filled week.

The Phoenix School of Music’s female instructors are the living embodiment of the skills taught at Femme Rockage. Along with Gabby La La, Lauren Harkins (pianist of Not to Reason Why), Colie Sutter (bassist of Uterus Kin), Emily Whitehurst (vocalist for Tsunami Bomb and the Action Design) are all talented and dynamic women who have played the Phoenix Theater stage many times over. The course also comes with a brochure with testimonials from other women musicians about finding their own voice, their own confidence and their own talent.

The motto of Femme Rockage is “to rock with love, honesty and integrity.” Most importantly, these no-cost classes are open to anyone. As the code of rockage declares, rockage is “recognizing the infinity and beauty of music as an art, a language, an idea and a way of life.”

For more information about the Phoenix School of Music, the Phoenix Art Program, the Phoenix Health Clinic or even a good old-fashioned list of upcoming concerts, see www.thephoenixtheater.com.