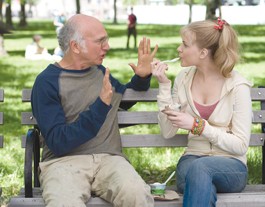 Woody Allen's 'Whatever Works' stands by its title


The love of the last word is the province of comedians; when you put someone down, you want them to stay down. In this fashion, Groucho Marx sings “Hello, I Must Be Going” over the now-traditional white-on-black titles of Whatever Works, the newest Woody Allen movie, a weird mix of Ibsen and Doc Simon.

Whatever‘s main character is Larry David’s Boris Yellnikoff. Though he’s Jewish and from the outer boroughs, really he’s a Scandinavian / Germanic-style misanthrope, addressing an audience only he can see and sporting a terrible limp from his suicide attempt years previously. Formerly a physics professor short-listed for the Nobel Prize (“It was all politics, just like any award,” he says), today he’s retired, a free-range castigator brutally teaching chess to children and living in a brick-lined vault in Manhattan’s Chinatown.

One evening, Boris finds a girl curled up on a piece of cardboard under his fire escape. The waif is Melodie St. Anne Celeste (Evan Rachel Wood), a former Mississippi beauty queen who fled the Deep South and has no plans. Boris reluctantly puts her up while treating her to copious insults, yet takes her to the New York sites she wants to see. Cinematographer Harris Savides, a Gus Van Sant veteran and the vintage-lens cinematographer on Margot at the Wedding, brings up an even danker, smoggier version of the tropic humidity in New York than Zhao Fei provided for Allen in Small Time Crooks. It’s permanent summer in this film, all the better to use Wood for her decorative qualities.

Melodie takes Boris’ imprint completely—his rants, his phobias and his dislike of sex—and marries him. A year afterward, the in-laws arrive for a first visit. Marietta (Patricia Clarkson) believes that she has tracked her runaway daughter down and is outraged to find the girl married to a neurotic man old enough to be her grandfather. Soon thereafter, Marietta’s estranged husband (Ed Begley Jr.) shows up in the apartment.

Clarkson is good, of course, as a scratching post for Boris the grouch, a hybrid sort of Margaret DuBois or Blanche Dumont. She advances the action by introducing Melodie to a younger, better-looking and seemingly more suitable man, Randy (Henry Cavill), as flat as the handsome prince in a prep-school play.

Whatever Works is based on a script Allen had in his drawer for several decades, and it shows. But despite some canned corn, Allen knows how to make a civilized comedy even when denouncing civilization.

David’s sneer is as effective here as it is on Curb Your Enthusiasm, yet it’s hard to handle the eventual humanizing of Boris. If he sees the universe as a violent machine that’s running down, why is he warmed by the miracle of unlikely birth? What does a miracle matter, if it only leads to disaster?

This wonder-of-life argument is the same argument that led the icy physics professor Dr. Manhattan back to humanity in Watchmen, and it’s not any more believable here. When we’re meant to feel for Boris after he wakes up the building with a panic attack in the middle of the night, screaming “The horror, the horror!” Allen presumes that the audience doesn’t know their Conrad. Didn’t Kurtz cause his own horror, through his own blind acceptance of ideas that dehumanized everyone around him?