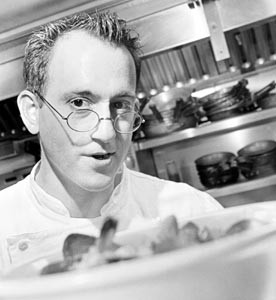 “I don’t know why I’m nervous,” says Steven Obranovich over his shoulder as he leads the way into Larkspur’s Left Bank restaurant. “I guess I’m just a pessimist. Anything that can go wrong, will. I’m going to make some coffee. Do you want some?” The 32-year-old chef lives on coffee, that and Marlboro Light 100s. “Everyone smokes in the restaurant business,” he says with a shrug and continues back to the kitchen. “One place where I worked in France during my apprenticeship, there were 25 of us sitting in the locker room smoking.”

Obranovich may not get to smoke indoors as much anymore, but he still carries a lot of France in his life, visiting regularly for ideas and old china and preparing Left Bank’s popular cuisine de grand-mère (“grandmother’s cooking”). But not everything French is fabulous, as he discovered in 1995 when he joined the staff in Chicago’s Everest Room after graduating from the California Culinary Academy in 1995. At the Everest Room, old-school French traditions reigned, including the one about staying in your position until you die. Obranovich wanted to be more than fish chef, and almost managed to do so in his boss’s offer to open a restaurant in the faux Eiffel Tower in Las Vegas. He grimaces even now at the thought.

“Maybe I’m being a Bay Area snob, but why would you go to Vegas and eat at any of those places?”

Fortunately for the upwardly striving Obranovich, he landed the Left Bank position after a round of secret interviews and left the Las Vegas gig for a colleague of his at the Everest Room. “Everyone went home happy. She got to be chef at the new restaurant. And I got to come back to the Bay Area, and I don’t have to deal with the snow or the stupid, ugly people of the Midwest.”

On this note, Obranovich puts away the enormous bowlful of chanterelles that he’s been ripping up for tonight’s fish special (a salmon roulade filled with sautéed wild mushrooms) and eagerly accepts a suggestion to wait for the photographer out on the patio. He relaxes into the chair and puffs casually, but gets a little anxious again when the photographer arrives. “I’m not putting a hat on,” he mutters as he stubs out his cigarette. “I’m just letting you know. I don’t wear one.”

IN THAT tone of voice, and peering over his wire-frame glasses, Obranovich resembles a shy teenager refusing to wear a tie to class pictures. But the resemblance fades entirely when he steps behind the stove, clattering pans together for a quick lunch of bouillabaise and steamed mussels. “I actually hate fish,” he says, pulling handfuls of fish and shellfish out of a knee-level drawer and tossing them into pans sizzling with oil, garlic, and shallots. “I never eat it. But it’s the easiest thing for me to be creative with. Because I did it for four years, every single day.” He shakes the pans up and dumps them into big bowls, while the photographer tries to keep up. “You’re not seeing all my head? How’s this, is this better?” He lowers his head to make a cheesy grin over the bowl.

We take the heaping bowls of seafood back to the patio, and Obranovich ponders the question of what is la cuisine grand-mère. Obranovich’s own grandmother cooked badly, but is this the kind of food–rich seafood stews, sauerkraut fried in duck fat–that French grandmothers cook?

“Oh, yeah. I’ve been to France a whole bunch of times, and they’re pigs! They’re all svelte, none of them are fat, but they drink a lot, they smoke a lot, and they eat a lot, all day long. They eat the things that nobody else in the world can eat, and they’re fine.”

Obranovich tries to give a history of his life in five minutes. He mentions being 7 or 8 and learning to make salads and fresh foods from his mother’s Palo Alto garden. Theater was his life, even while he worked for five years as an aide for a politician. He got the idea for cooking school only when a friend jumped the lawyer track and applied to CCA. Now he can’t imagine doing anything else. In spite of the standard chef worries about food costs and critics, the last year and a half have been the best of his life.

He drains the last of his wine and then abruptly changes topic. “Well, now that I’ve had a glass of wine, do you want to know what it’s like to be a gay chef?”

Fans of food literature might recall the particularly gruesome sexual threats described in chef Anthony Bourdain’s book Kitchen Confidential, when a chef once threatened to pull a guy’s eye out and fuck him in the skull. Obranovich says the sexual tension was usually more subtle than that.

“It wasn’t malicious; it was like, let’s see how far he’ll go. There was one person who I had problems with. He was kind of my equal on the line. I was the fish chef, he was the meat chef, and it was like, OK, who’s better? So I would turn it around on him. He’d touch me, and I’d turn around and grab him there. I’d establish the boundaries. And then, you know, it basically stopped.”

SOME of that confidence seems to come from Obranovich’s 11-year relationship, an amazing record in an industry rife with marital stress. But the two seem to have reached some sort of equilibrium: the husband, as Obranovich likes to call him, is in France on a Fulbright, and anyway, Obranovich regularly works 14- to 16-hour days. “Here in America we are all renowned for being workaholics. It’s not strange for me to be so dedicated to what I do. And it’s not strange for him either, because he knows that that’s the type of person that I am, and he respects it.”

Obranovich visited his partner in France last week and came back to a moderate level of chaos, even for him: the holiday season, a new sous-chef, and a big launch party with wine.com for Left Bank’s own label of wine. So other than smoking his head off, how does he decompress?

“I go to sleep. That’s all. I don’t decompress,” Obranovich says as he takes another drag on the cigarette. “My mind is constantly going with work, constantly. When I’m driving home, I’m thinking, OK, what am I doing tomorrow? When I get home at night, I fill the coffee machine with coffee and wash my face, then I just lie there for about 10 minutes, go to sleep, wake up, and start all over again. It sounds really strange, and it sounds like it wouldn’t be fulfilling, but it is.”

Obranovish created this savory custard to accompany the release of Left Bank’s first wine, a Beaujolais. Any fall greens (such as frisée, spinach, or escarole) dressed in a vinaigrette of your choice would be suitable to complete this dish.

Carefully dip spinach leaves, one by one, into boiling water for a few seconds. Immediately remove to a bowl containing ice and water and chill. Squeeze out as much water possible, being careful not to break the leaves, and unfold onto paper towels. Arrange spinach in overlapping layers in dish or pan and pour in pumpkin mixture. Bake in middle of oven for 45 minutes or until a knife inserted comes out clean.

While flan bakes, make the double crème. Pour cream into a pot and bring to a boil, being careful not to let it boil over. Reduce heat and simmer for 15 minutes, or until cream coats back of a spoon. Add lemon juice, nutmeg, and salt and pepper.

When flan is baked, let it set for a few minutes. Unfold and serve warm, drizzled with or pooled in double crème. Serves 8 as an appetizer.