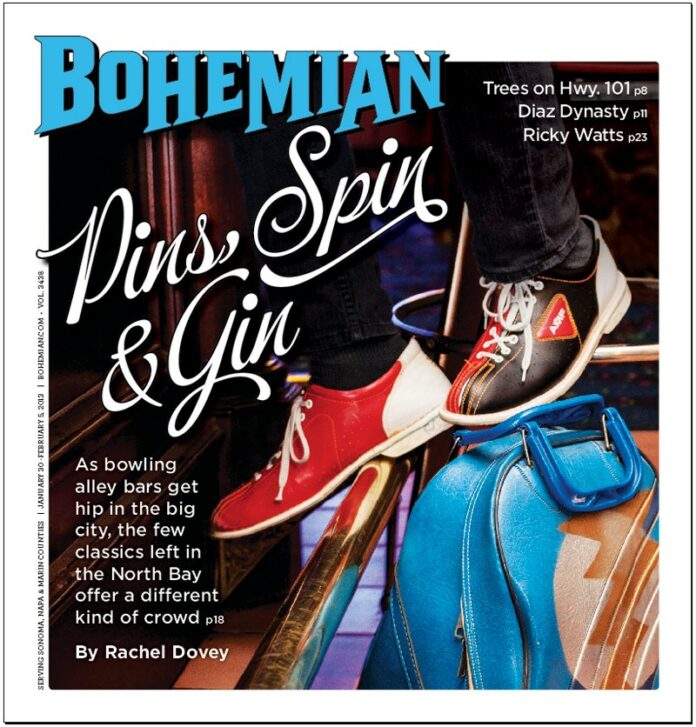 Late Night at the Lanes

“Where else are you gonna find a middle-aged Cubs fan bumping and grinding on a pool cue?”

I’m in the lounge at Double Decker Lanes in Rohnert Park and the scene that 21-year-old Travis Byrd describes is, indeed, happening. The silver-haired dancer in a blue Cubs jersey will later ascend a karaoke stage to groove and enunciate his Chicago-loving heart out in a passionate rendition of AC/DC’s “Dirty Deeds Done Dirt Cheap.”

It’s this growling tribute to cyanide and neckties—and things like it—that draws Byrd’s group of twenty-something friends to the Double Decker bar, one of whom says he has never bowled here.

“This is a working man’s bar,” says 23-year-old Dillon O’Halloran, looking around at the leather stools, faux-rock wall and big-screen TV set on MLB.

Built in the ’70s at the suburbs’ end, often marked by flickering Bud signs, bowling alleys and the bars inside them are indicative of another time, when roller rinks weren’t creepy and brushing PBR foam from your ‘stache was neither ironic nor cool. In the shelf life of hip, this of course means they’re about to hit their critical retro date and become the darlings of Instagram-users everywhere—San Francisco’s just-opened Mission Bowl, with its wunderkind chef, grapefruit cocktails and regularly scheduled brunches, serves as a preview to this inevitable trend.

But what of North Bay bowling alley bars? Are they still the authentic home of longtime regulars—true flannel-and-whiskey dives? Or are they, too, being co-opted by the young and beautiful, those with disposable incomes and nostalgia for a sepia-toned past they never actually knew?

The phrase “kids these days,” which I overhear at Boulevard Lanes in Petaluma, doesn’t seem out of place.

Bartender Sasha Barrios confirms that Boulevard’s lounge clientele is generally older. She stands behind a center island made of dark wood and Greek columns, which was remolded after the bar was built, but no one can remember the exact year—sometime during the Reagan era. It looks like it belongs in Tom Selleck’s house. Two big-screen TVs broadcast a 49ers win, signs for Bud, Coors and Miller Lite line the walls, and a small group of patrons reference Cheers and address each other by first name.

“Most of our regulars are league bowlers, people who have been bowling for years,” Barrios says.

One such regular is a man who asks that I refer to him only by his first name, Kip. He has silver hair and is dressed simply, in boots and denim. He’s been coming to Boulevard for roughly 10 years and has been part of the bowling world for much longer.

At the age of 17, he began working as a bowling-alley mechanic, fixing the pinsetters that deposit neat triangles of 10 at the end of each lane. This was in the mid- to late ’70s, he recalls, at bowling alleys in Greenbrae, Millbrae, Novato and San Rafael, most of which have long since closed.

“The only one still up is the Country Club in San Rafael,” he says, lamenting the rising cost of the sport. When he first started working, it cost 65 cents to play and 25 cents for shoes, and with the youth discount, it was 40 cents a game and 15 cents for shoes.

But although he’s no longer a mechanic, he still enjoys Boulevard’s bar. “I know a lot of the people,” he says. “It’s just comfortable.”

“The regulars depend on me, I know everyone’s drinks,” she says, adding, “I wouldn’t want to deal with a bunch of kids.”

The vibe at Windsor Bowl is similar, at least at 5pm. In the warm, wood-paneled interior, a group of men discuss their local Elks Club. A woman sits at the far end of the bar, nursing a beer, and remarks sadly, “I remember the day I turned 40.”

And at Double Decker in Rohnert Park, bar manager Shelly Brewer says there’s a steady group of older regulars—”some of them really old”—who come in for a drink every day after work. In the 12 years she’s been here, a number of them have passed away.

“There’s no real label to who comes in here—they’re from all walks of life,” she says.

But as the Friday evening hours tick by, Double Decker increasingly swells with younger people who weren’t even alive when a dollar would rent four pairs of bowling shoes—and it’s precisely the bar’s dated, dive aesthetic that draws them, according to O’Halloran and Byrd, who sit across from each other on a pair of leather couches like foils in a bromance.

“Nowadays, people go out to get laid or get on the dance floor,” O’Halloran says. “Bowling alley bars are still a little bit of a secret, so no one’s putting on airs.”

He has perfect posture, a black coat and says I should refer to him in this piece as “an Adonis in a scarf.” Byrd, meanwhile, sports a T-shirt and slicked-back hair, and sprawls across the couch in a leisurely slouch as he names the supposed vices of other local watering holes. They suffer from a host of things, he says: fraternity assholes, sorority girls, people the pair went to high school with and bathrooms full of pubic hair.

“The thing about this is it’s blue-collar,” O’ Halloran says.

They two both work—one at UPS, the other as an EMT—and live with their parents. Neither of them went to SSU. They met in high school at Rancho Cotate, in a scenario involving a comic book store, an Iron Maiden concert or one of their sisters, but because they keep revising the story, I can’t know which one is actually true.

I ask if their lifestyles fit with the working-man image they’re conjuring, or if they are, in fact, simply hipsters hopping on the next trend.

“Fuck, yes,” says Byrd, when I ask if they’re actually blue-collar. “I leave work sweating every day after busting my ass. I’m not part of that hipster bullshit.”

But O’Halloran is less sure.

“I guess this is the new cool, like intentionally going to a thrift store,” he says.

“We’re part of it,” he concludes, after considering for a moment and looking genuinely sad. “I should just go hop on my fucking fixed-gear. We’re part of the scene that is ruining the bowling alley bars.”

After that, their discussion gets heavy. They talk about unions, guns, Nintendo 64, “the fucking iPad,” the feeling of disdain they have for other Millennials and their lingering fear that they won’t be able to hand a life of security and comfort to their own children in this insecure, post-recession world.

On the small stage, a karaoke regular I’d met earlier named Karla Mayer belts out “lordy, lordy, lordy, lordy” and assures the Friday-night crowd that freedom’s just another word for nothing left to lose. Her soulful voice fills this room full of pool tables and Cubs fans and care-worn young adults, warming and soothing a glass full of something amber and familiar knocked back again and again.

DROWN YOUR SORROWS AT A BOWLING ALLEY BAR