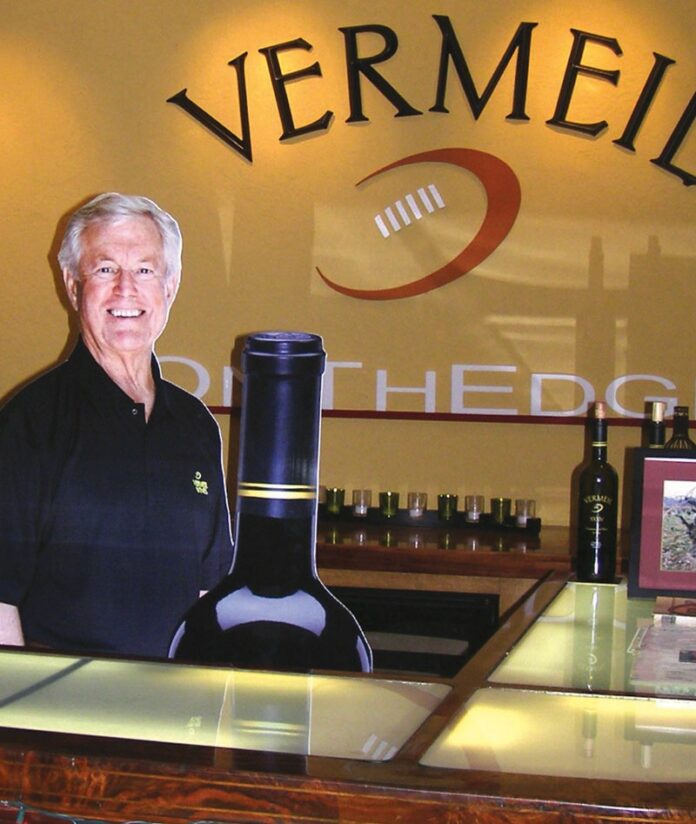 The main problem in pairing Super Bowl party food with suitable wine is the objections that will have already arisen before I get to the end of this sentence. Is it not an insult to the spirit of a quasi-national holiday dedicated to consuming buckets of corporate beer and bags of high-saturated fat snacks, all while celebrating an athletic contest—in between multimillion dollar advertisement from those selfsame corporate beer giants?

Not if Dick Vermeil has something to say about it. Just ask him, he’s right here. The legendary coach who led the St. Louis Rams to victory in Super Bowl XXXIV is here in cardboard likeness, anyway, beside an enormous bottle of wine (a Superthuselah?). A Calistoga native, Vermeil is entrenched in Philadelphia, but he comes out during harvest to tool around on a tractor and catch the Calistoga Speedway’s sprint car races, which his father founded 75 years ago.

Remodeled since our last visit, the space hosts a museum of Vermeil’s long career. You can enter a drawing to win an autographed football, or pose for a picture with Vermeil’s stand-in. Mary Sue Frediani, whose parents met while hanging out at Louis Vermeil’s auto-body shop, runs the tasting room; husband Paul Smith is the winemaker. All the grapes are sourced from the Frediani and Luvisi vineyards.

If the football on the label isn’t permission enough to enjoy the light, fresh and pink 2012 Cabernet Sauvignon Rosé ($20), try the barrel fermented 2011 Sauvignon Blanc ($24), with a baked-pear richness you’d expect from Chardonnay. Pair with baked brie en croute, if you’re having that kind of party.

Smith’s OnThEdge 2009 Charbono ($40) has a spicy, blueberry aroma and a fine, dry finish; buffalo wings might overpower it, but if there’s any pan-seared duck breast with tamarind sauce on hand, that’s the ticket. Fans save the 2009 “XXXIV” Proprietary Red ($42) for special game days; turn to the 2008 Luvisi “1908” Vineyard Zinfandel ($38) for the brightest cherry fruit of this lineup. Nonna Frediani’s Rosedale Red ($19.57) is rustic and ready for a big slab of lasagna.

What about potato chips? The 2009 Late Harvest Sémillon ($18) has just the right amount of sweet peach nectar flavor for a winning sweet-and-salty pairing. And what a great picnic wine—for those nonconforming sorts who can not buck up and take an interest in either commercials or sports franchises, even for one day. Poor folks have got the beaches all to themselves.