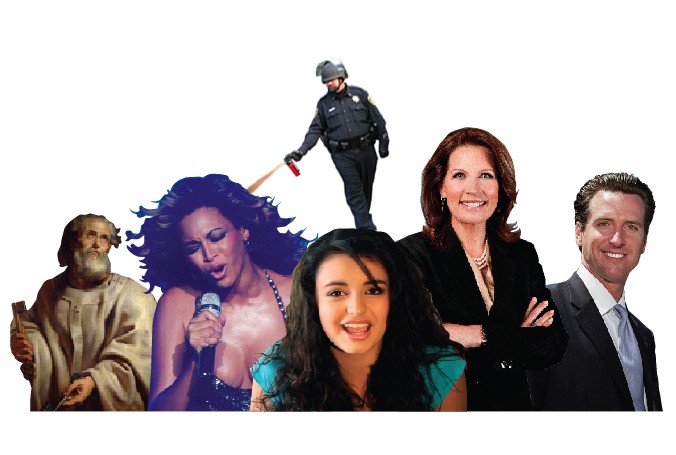 Our special news experts assess the year of 2011

Ah, 2011. As news hounds, we remember all too well the Japanese earthquake, the killing of Osama bin Laden, the manufactured debt-ceiling “crisis,” the death of Steve Jobs and the incessant ubiquity of “Rolling in the Deep.” But what do the real experts remember about this tumultuous year? Specifically, what does Gavin Newsom’s hair remember?

Luckily, we’ve contracted with these (not at all) totally real personalities to get exclusive (fake) reminiscences on the year. Peer into their souls and become one with their insight while you wait for the economy to turn back around. Then peer again, and wait anew. And peer, and wait, and peer, and wait, and then hope that you never have to hear about Casey Anthony ever again. Here’s to 2012!

The Year According to Gavin Newsom’s Hair

You know what they say: hair today, gone tomorrow! Ha ha! Actually, that doesn’t apply to me at all. You see, I decorate the head of the suavest piece of man tango to hit Marin County since Sean Penn picked up and moved to L.A. after that nasty breakup. Luckily, old Spicoli’s return to the North Bay, when he stumped for Norman Solomon’s Congressional run in Petaluma, was short and sweet—his salt-and-pepper locks really give me a stiff run for my money.

Can you believe that a few folks thought that the boss moved up here from S.F. so that he could make a run for Lynn Woolsey’s spot after she announced her retirement? Hate to break it to you, but Sir Lieutenant Governor’s got his eyes on the bigger prize—and, yes, it does involve large amounts of very expensive hair products for moi—like mousse manufactured from serum made of the hearts of endangered black-crested macaques.

But seriously, some real monkey business has gone down since Gav and Jen bought us that $2.2 million mansion in Kentfield (which just might have an ultra-special, glass-walled room containing 12 shelves filled with products to make me look even sleeker). Those SMART-trainers got a run for their money when they got hit with a petition trying to stop that train in its tracks. Hey, I’m a SMART supporter myself, as long as we can stay out of the wind.

Then there was that Tea Party Express fiesta out in Napa. Everyone thought that pretty piece of perm Michele Bachmann might show up, but instead they got Pat Boone. He’s not only the president of the Hair Club for Men, he’s also a member. And then there was that HUD report all about Marin County and its lack of racial diversity and affordable housing. Um, can I plead the Fifth?

I’d talk about those Occupy people that camped out on the lawn of Santa Rosa City Hall for a good few weeks, but seriously, I’ve never seen people more in need of a José Eber Brazilian blowout than those 99%-ers. OK, gotta go. Gav just picked up a new comb made of diamond-coated bristles. We’re heading out to meet up with new bestie Carlos Santana for a sweet hair party. Ooh-la-la!—Leilani Clark

The Year According to the UC Davis Pepper-Spray Cop

At this time of year, I realize how truly fortunate we all are. What a momentous year it has been for the Pike family. Because the children PPPPPPPFPFFFFFFFFTTFTFTFTFTTTTT nearly grown, we took what will probably be our last true family trip. Florida was everything we’d hoped it’d be—Disney World, the Marlins PPPPPPPPFPFFFFFFFFFFFTFTFTFTFTFTTTTT lots of suntanning—and some great surf ‘n’ turf on the beach. And our sweet girls never fail to make us proud. Taylor is graduating in June with a 3.8 GPA and headed to USC, while Audrey is taking PPPPPPPPPFPFPFPFFFFFFFFFFFFFTTFTFTFTTTTT from the hospital in order to work on her novel. She’s been having good luck with publishers and we expect a bestseller! I worked on my Mustang on the weekends and PPPPPPPFPFFFFFFFFFFFFTFTFTTFTFTFTTTTT most of the year. Blessing to all of you, as we look forward to 2012.—Gabe Meline

The Year According to St. Peter

No one ever said it was an easy job, deciding who gets to enter heaven and who gets bounced to the fiery depths. But at the end of this year, I’d say I deserve a raise. Think I’m exaggerating? You try breaking the news to bin Laden that there are no virgins in Hell, much less 72 of ’em. And man, who pissed in Muammar Gaddafi’s punch? I tried to warn him about the toasty temperature, but he insisted on wearing all those metals downstairs anyway.

After dealing with those nincompoops, I sure was happy to see Liz Taylor come waltzing in. I’m such a sucker for those violet eyes that I had to go stick my head in a cloud just to keep from proposing. And then there was Steve Jobs, bringing me an iPad touch that not even God has gotten his hands on yet! Everything was going smooth with him up here until he started redesigning the harp, which just pushed the poor angels over the edge. And who can blame them? They’ve been testy ever since Clarence Clemons came on board and started serenading us constantly with “You’re a Friend of Mine.” Damn, that cat can blow a sax! (Whoops, I mean Darn.)

Even though he created the squarest comic to ever fit inside a circle, I let old Bil Keane in—Heaven is just one big family circus anyway. And of course I welcomed Jack Kevorkian—how could I not, after all the good business he’s sent our way over the years?

I sure am hoping for a quiet New Year’s Eve, but I’ve got to keep my eye on Jeff Conaway and Amy Winehouse. I may be old, going on 2007 years now, but I ain’t stupid—and I think that little Winehouse has a bit too much buzz up in her beehive, if you catch my drift.—Jessica Dur

The Year According to Michele Bachmann

So busy! After getting the thumbs-up from God to rescue this great country from President Obama’s reign of Islamosocialist terror, I spent 2011 traveling this land, meeting all kinds of interesting people and learning so much.

Of course, we know that 2011 was the year that the people rose up and said “enough” to a system that no longer serves them. I’m not talking about those godless 99%-ers. Get a job, people! I’m talking about all those good folks (and God) who support my candidacy. We are the .00001%-ers. We are legion!

On the road to my nomination, I’ve taken great inspiration from our founding fathers, great men like Thomas Jefferson, John Quincy Adams, Grover Cleveland and several other historical guys who worked tirelessly until slavery was no more in the United States.

Back in August, I took off my hat to another great American, Elvis Presley. Without Elvis, all those colored people would have never gotten the idea for the blues, and rock and roll would have never been born, and then we’d never have the music of Air Supply.

This year we also marked the withdrawal of American troops from Iraq. I visited Iraq once, and I hope it can rebuild to match the splendor of some our great American institutions, like the Mall of America in Minneapolis. There’s a commonality with the Mall of America, in that it’s on that proportion. There’s marble everywhere. The other thing I remarked about was there is water everywhere. See you in the White House!—Stett Holbrook

The Year According to Beyoncé’s Fetus

But being Beyoncé and Jay-Z’s baby will have its share of problems. (No, I doubt there will be 99 of them, but, ha, thanks for going there; it’s not getting old.) For one thing, what in the name of Biggie’s fleshy left ear will they name me? Bey-Z? Jay-Y? Embryoncé? These are all names that no self-respecting zygote wants to hear vibrating off the walls of her amniotic sac.

And my mom apparently doesn’t know what déjà vu is. I know, I know, that song was years ago, but sometimes when I listen to it, I curl my webbed fingers into miniscule balls of rage and air-punch her fallopian tube. But I can’t stay mad for long with those 808s, and I usually just end up strapping on my cashew-sized stilettos and Single-Babiesing it up, if you know what I mean.

And then, yes, I get jostled and shimmied and pirouetted around a lot. I get stuffed into body suits, artfully hidden by gold-sequined draping, and despite my mom’s obviously pregnant bikini photos, my very existence is still questioned by some.

But none of that really worries me. You know what keeps me up at night, floating in a sea of uncertainty, doubt and electrolyte-rich fluid? My dad once appeared on a song in which zebras snorted coke.

All things considered, though, I guess I have it pretty good. Now, excuse me while I sit back, relax and, literally, get me bodied.—Rachel Dovey

The Year According to a Humblebrag Oversharer

Definition of a humblebrag, from the Urban Dictionary: A brag shrouded in a transparent form of humility [often delivered via social media]. Example: “Just stepped in gum. Who spits gum on the red carpet?”

February: Ouch. Just checked Billboard and Radiohead is totally outselling my latest album, My Shit Don’t Stink (In Fact, It Smells Like Hyacinth).

March: Every day I wake up looking like a Tsunami survivor—then I brush my hair and go to work as a model. #HugzForJapan

April: Kate’s pores look as big as mine from this close! Who knew?

May: Yikes. Just checked Rotten Tomatoes and Bridesmaids is getting better reviews than my movie, Don’t You Wish Your Girlfriend, Wife, Mistress and Concubine Were Hot Like Me?

June: Not surprised by the verdict: I know Blagojevich, his toupee and his toenail-clipping fetish all too well. #BiggestMistakeofmyLife

July: Lol, if I had the patience for foreign films, I would understand what everyone means when they say I’m prettier than Hermione.

September: Such a retard! If I’d known how much I would eventually get laid, I totally would’ve sprung for that HPV vaccine.

October: New personal trainer is a beast: I smell like I’ve been pepper-sprayed and arrested after sleeping in a tent for a week.

December: Don’t you hate it when you ask for a Clydesdale, and all your family can afford is a stupid pony!?! #99%

1. Winning Weiner: The Untold Story of an Unlikely Twitter-Fueled Friendship Between a Bitchin’ Hollywood Star Made of Tiger Blood and a Former U.S. Representative with a Penchant for Sexting, by Charlie Sheen.

3. Hackers: A Guide to Ethical Reporting (In Outer Space), by Rupert Murdoch.

5. Bunga Bunga Breakdown: How I Brought Down an Italian Prime Minister with the Sheer Power of my Bellybutton, by Ruby the Heartstealer.—Leilani Clark

The Year According to Rebecca Black

Wow, what a year! Now that it’s December, which comes after November, I’d like to go back and remember March. March is right after February, and right before April, and all that stuff comes before May. Then we we we we so excited for June, which comes before July, which comes before August. I would talk about October and September, but I can’t remember what order they’re in. But I know that everybody’s looking forward to January, which is both at the end of this year and the beginning of next year! Partyin’, partyin’, yeah!—Gabe Meline