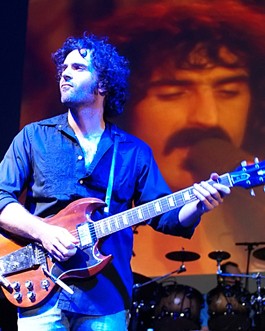 It goes without saying that Dweezil, or any of the Zappa children for that matter, has almost impossible shoes to fill. Frank Zappa has named in his honor a street in Berlin; an official, mayoral-approved Frank Zappa Day in Baltimore, Md. (Dec. 21); a bacterium; a fish species; a computerized chess program; and a small asteroid in our solar system (3834 Zappafrank). There’s also the statue in Lithuania’s capital, not to mention the almost 80 albums Frank released while alive, with more coming out of the vaults posthumously.

Born Ian Donald Calvin Euclid Zappa, due to conservative nurses who would not put “Dweezil” (a name Frank came up with for one of his wife Gail’s oddly shaped toes) on the birth certificate, the second-oldest Zappa offspring took to music, and guitar playing in particular, as his controversial and brilliant father had before him.

Dweezil showed a talent for his own originality early on, penning songs like “My Mother Is a Space Cadet” and forming a band with brother Ahmet called Z. The Zappa boys made two interesting albums as Z, Music for Pets and Shampoohorn, the latter of which featured a cover picture of Ahmet and Dweezil sporting long, goofy “shampoohorns” atop their heads.

His guitar playing and tutelage under his father earned Dweezil attention as a solid, innovative, technical (if at times a bit noodley) musician, fitting in the canon somewhere between jazz-punk, experimental and good old-fashioned intellectual rock.

A few years ago, Dweezil began touring as ZPZ: Zappa Plays Zappa, in which Dweezil and his band (some of them veterans of Frank’s bands) perform Frank’s songs in loving homage, even projecting footage of Frank playing on a giant screen so Dweezil can jam along with the “ghost” of his father. Zappa Plays Zappa hits Santa Rosa on March 7 at the Wells Fargo Center.

This isn’t the first time this musical torch-passing has been done—Natalie Cole did a technology-aided duet with deceased dad Nat that was all the rage for a while in 1991—but it works in the ZPZ format. Dweezil acknowledges his father’s legendary footprint while keeping his complicated, humorous, ambitious songs alive for a younger generation of listeners. The experience, especially when he hits the same notes as the looming vid-ghost of his dad, gives Dweezil what he refers to as the “bump of chicken” (a bad Japanese translation of “goosebumps”).

Now in its third year, ZPZ is a three-hour production of some 30 songs that took Dweezil’s band a quarter of a year to learn and perfect. “While it is true that Frank had a great sense of humor, he was also very serious about composing music,” Dweezil has said. “In reality, there are only a handful of skilled players who can play his most complex pieces. It takes a lot of patience to learn, and requires a fantastic memory.”

Dweezil is no stranger to ambitious feats. Consider his 75-minute-long song “What the Hell Was I Thinking?” which features some 45 guitarists, many from the pantheon of legends. He’s dabbled in film and TV, with a cameo in The Running Man and the short-lived 2004 Food Network show Dweezil & Lisa (as in Loeb, his then-sweetheart). And he’s also given his dad some good-natured competition in original song titles: “Shoogagoogagunga,” “Flibberty Jibbet,” “Doomed to Be Together,” “My Beef Mailbox” and “I Wants Me Gold,” perhaps a reference to the enjoyably horrible Leprechaun film franchise.

But it’s his father’s music Dweezil focuses on with ZPZ, from the jazzy guitar fury of “Chunga’s Revenge” to the anti&–politically correct fun of “You Are What You Is” and “Broken Hearts Are for Assholes” to the symphonic gusto of “G-Spot Tornado” and the well-known classics “Muffin Man” and “Don’t Eat the Yellow Snow.”

The Zappas are, in a way, aristocrats of an iconoclastic, intellectual, hypercreative strain. Far from rolling in his grave, Frank would no doubt approve of ZPZ, as well as his own spectral involvement on certain songs, honored that Dweezil isn’t allowing folks to forget the brilliance of the mind of one Frank Zappa.