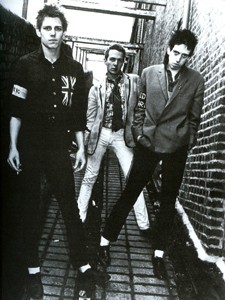 Joe Strummer and the ethos of punk

There are two opposing theories on the meaning of punk rock. One says punk rock has no meaning, that its impulse to negate comes from a rejection of heroes and icons, and that standards and ideals have no place in an aesthetic that wants to destroy what we have been told is good.

That’s the “failed theory” of punk. The other side of the coin says that punk is rebellion for a reason. That reason is revealed in Let Fury Have the Hour: The Punk Rock Politics of Joe Strummer (Nation Books; $15.95). This collection of essays and interviews, edited by activist, writer and filmmaker Antonio D’Ambrosio, is not a biography of the late frontman and songwriter of punk-rock greats the Clash (who died suddenly at age 50 in December of 2002), nor is it a history of the Clash or punk rock. Rather, it is an argument for Strummer as a leader of a genuine revolution, a change of standards in which personal integrity matters most.

While the book’s discussion of integrity can’t get away from the music and familiar story of the Clash, its overriding purpose is to point to Strummer as a long-term heroic figure. Only one of the four sections is centered on the Clash, with the other three drawing connections between Strummer’s post-Clash work and other great contemporary multicultural rebels. From early pieces on the band by notable critics like Lester Bangs and Greil Marcus, to recent reflections by radical contemporaries like Tim Robbins, Chuck D and Billy Bragg, Let Fury Have the Hour is consistent in its insistence that punk rock does matter. And when it does, Joe Strummer is there.

Strummer is there in the London punk scene of ’76-’77, when a pre-Thatcher fascism led to race riots that his band translated into keen pop challenges. He’s there when the British music scene needed a reminder of its working-class roots. He’s there when reggae and world music needed to reach an American audience via a rock tough guy. He’s there when hip-hop realized it needed a message. And he plays his last gig, a brief reunion with distanced Clash co-songwriter Mick Jones, as a benefit concert for a local firefighters union. Importantly, the book doesn’t demonize Jones, who is too often cast as the lite-pop McCartney in contrast to Strummer’s serious Lennon.

Strummer is even seen as silly. He tells interviewer Kristine McKenna that his favorite Clash song is “If Music Could Talk,” a frivolous piece of filler from the sprawling Sandinista! album that Strummer likes because “it shows we were willing to try stupid things.”

He also tells McKenna that the most widely held misconception about him is “that I’m some kind of political thinker.” Fair enough. But Strummer’s globe-trotting diplomat parents led him to love and respect the world. Lesser punks have taken rootlessness as a reason to hate life. But John Graham Mellor became Joe Strummer because he had rock ‘n’ roll idealism. In contrast to punk’s impulse for desecration, he loved not only the heroes of rock tradition, but also the quest for a renewed community that made rock matter in the first place.

From the depths of Marxist analysis to funny hip-hop fan rants, the pieces in Let Fury Have the Hour remind us that Strummer’s quest for community has a historical basis in radical music activism. For Strummer and musicians like Woody Guthrie, the MC5 and Victor Jara, tearing down the walls meant opening the doors to class unity. That quest for a democratic community coexists with punk’s essential and most enduring trait, the “do it yourself” ethic, a humanist standard that values honest individuality over mere upheaval. If punk destroys to demand change, the demand for change implicitly imagines a better world. Strummer and music’s best radicals have nudged us to commit ourselves to that greater change.

Saving the most obvious and convincing touch for the final essay, D’Ambrosio details Strummer’s near miss with icon Johnny Cash in the final months before both men’s deaths. Strummer, on a marginal comeback streak with solid world-rock records by his new band the Mescaleros, had submitted a couple of originals to Cash for his sessions with rock producer Rick Rubin. Johnny never got to the song “Long Shadow,” but Joe put it on his last disc, Streetcore.

This final chapter ties together some of punk’s loose ends: DIY, unfulfilled idealism and a rebel community. Let Fury Have the Hour steers us toward an understanding of punk as a positive force. Informed by revolution and global politics, Strummer, like icons before him, tore down walls to get to the standards he had set for himself.