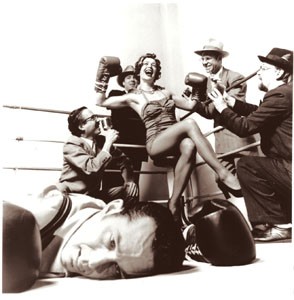 The Good Fight: Steve Lucky and the Rhumba Bums go to the mat for the Jenner Watershed Fund in July.

How does a tiny coastal community protect its watershed? By throwing a top-notch concert series.

The people of Jenner (population 170, give or take a few), a coastal enclave of artists and old-timers, are not the kind of folks who take things sitting down–which is probably why they choose to live in Jenner, where there is no cable but there are two restaurants, as well as neighbors willing to throw a party at the drop of a hat. There’s also a trustworthy water source, but who knows for how long.

Jennerites have a long and complex history with their watershed. When Jenner was established in the early 20th century, the mill workers who populated the town tapped into Jenner Creek–whose source lies on the privately owned 3,000-acre Rule family ranch–for their water. The town won rights to the water in the 1920s, but for years the only water system was a jerry-rigged network of lead and plastic pipes leading into a small redwood tank. It wasn’t until the late ’80s that the community built a new one.

“As with many rural communities, we get our water from a little creek,” explains Tom Yeates, a Jenner resident of 19 years. Yeates inks, tones, and colors a “Zorro” newspaper strip and has also been heavily involved in over 15 Tarzan comic books. “That creek is on a steep hillside that has redwoods growing on it, and it’s been logged several times. When they’ve logged in the past, it created a lot of sediment runoff into the creek.”

“The people who owned the land wanted to log it yet again, and the North Coast [Regional] Water Quality Control Board and the county–which controls our water system–both objected to this logging plan. They recommended that it not be approved.” When the California Department of Forestry approved the plan anyway, Jenner had to sue the CDF to prevent the logging and protect their water.

But retaining a team of lawyers requires money. “We were passing the hat around, and it was not always working,” says Billy White, who repairs antique timepieces and also does printmaking. He had just put a very good sound system (yet another of White’s skills) into the newly renovated Jenner Playhouse and community center, and he saw another way.

“We had this great little theater–nice funky vibe, dance floor, some really cool old seats,” says White. “The acoustics were very good, and the building was hardly ever being used for anything. So I proposed to the community that we try to have a concert series and raise money for our legal fight.”

Thus began the Jenner Concert Series in the spring and summer of 2002, with Sonoma County’s Trailer Park Rangers as the inaugural show. All in all, White and Yeates teamed up to produce 16 concerts, whose proceeds kept the lawyers busy, the timber untouched, and the water flowing.

“Our biggest push was to try to get the biggest names we could, because it’s kind of tricky to get people to come all the way out here,” says White, “especially a band that they could see somewhere else a week later. We did try to include as much of the great local talent as we could. There’s a shortage of local venues.”

“And [bands] are hungry for a place to play,” says Yeates. “Most of them are very sympathetic to the issues we’re working with.”

White and Yeates are not strangers to putting on benefit concerts. “For 20 years, Jenner had ‘A Whale of a Gala’ volunteer fire department fundraiser over Memorial Day Weekend, and Billy and I were both on the end of putting on music there,” says Yeates. “Billy is a musician, and we know a lot of musicians. I’m a longtime fan of the old-time San Francisco rock and roll scene, and I have a few tenuous connections to that gang. I’ve milked those connections as much as I can. We’ve got a pretty good lineup this summer.”

Since May, Julian Lage, Stiff Dead Cat, Mitch Woods and His Rocket 88’s, and the Michael Barclay Blues Band have performed at the Jenner Playhouse. Steve Lucky and the Rhumba Bums–with preshow swing-dance lessons included in the ticket price–play July 12, and roots-reggae band Groundation play Aug. 16.

But first up is a big run of San Francisco psychedelia. The next concert, on June 28, features Big Brother and the Holding Company with David Gans–host of KPFA’s Grateful Dead show–opening. On July 13, Paul Kantner of Jefferson Starship plays with some surprise guests.

The July 1 show with psychedelic guitar whiz and Grateful Dead pal Steve Kimock sold out in a day. To see him, people will be driving to Jenner from all over the country.

It’s not possible for most bands to play for free, musicians not being the richest people, but they often will play for a reduced fee. Steve Kimock is donating the service charge on all of the tickets from his show to the fund. “[Musicians] really connect with a show like ours,” Yeates says. “They probably wouldn’t do that for a lot of shows, but they kind of get the feeling that we’re kindred spirits.”

And happy musicians make for great shows. The crowd at the Jenner Playhouse tends to be very responsive, a laid-back gang who are out for a good time. There’s a little bar with beer and wine, comfortable theater-style seating, and ample room for dancing–which is fully taken advantage of.

“Nobody’s afraid to be the first one to go up and dance,” says White. And because all of the concerts are all-ages, eight-year-olds and 80-year-olds can be spotted cutting a rug. “We do provide consistently good quality of experience. It’s appreciated. You don’t get it everywhere. We need to host something that they just won’t miss. I think that’s the key to being all the way out here.”

This year, White and Yeates have made an effort to spread the work load around, though they still shoulder a great deal of responsibility and sacrifice hours that they would otherwise be devoting to their work. “It’s a lot of time,” says Yeates. “I was on the phone all morning, talking about shows.”

The entire concert series is a volunteer act that’s brought the community’s core of 50 or 60 people closer together. “We love to play hard . . . but we work hard, too,” says Sandra Maresca, who gives her time to do publicity for the concerts. “Putting this concert series together, it’s all volunteers.”

Volunteers set up before the concerts, tend bar, and clean up afterwards. Yeates acts as emcee at the concerts, and White does the sound. The “Jenner Rocks” logo–depicting, appropriately enough, the Jenner rocks–was designed by Tom and his wife, Lori, who’s also an artist.

Something is working–though the timber-harvest plan was approved a year and a half ago, no trees have yet been cut down–but the fight is still not over. “I think that lately it’s really come to light how important it is that we win this thing,” says White. “Because this is the only water we get–it’s all we have.”

Yeates and White have an added bonus along with the cause. “When it comes to putting on a good live show,” White says, “there’s nothing he and I would rather do.”

All concerts are at the Jenner Playhouse (located directly behind the Jenner ‘C’ Store gas station), Highway 1, Jenner. Big Brother and the Holding Company play on Saturday, June 28. Doors open at 7:30pm. $20. Steve Lucky and the Rhumba Bums play on Saturday, July 12. Doors open at 7:30pm. Tickets are $15 with swing dance lesson included. For tickets, call 707.865.1938 or visit www.jennerconcerts.org.