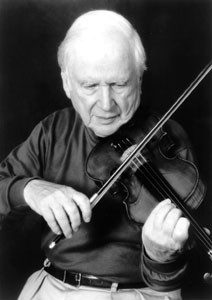 Baroque elegy is a surprise hit

It’s understandable that Americans have sought out an elegy for solace in the post-Sept. 11 emotional turbulence. What’s intriguing is that, at a time when crossover hits are dominating the classical charts, it’s an 18th century composer who’s delivering that soothing sound to troubled 21st century audiences. What’s more, it comes in the form of a recording that is not only stunningly beautiful but also purported to be rife with hidden numerological messages about mortality.

The sublime Morimur (ECM New series), featuring baroque violinist Christoph Poppen and the Hilliard Ensemble, is what the New York Times has called Bach “at his most austere, at his most obsessed with death.”

The hour-long recording pairs Bach’s powerful Partita No. 2 for solo violin in D Minor (which ends with the famous Ciaconne) with chorales sung exquisitely by the minimalist Hilliard Ensemble: first the Partita, next the chorales, and then the Ciaconne with four voices singing corresponding chorale fragments superimposed over Poppen’s virtuoso solo violin playing.

In recent weeks, the CD has climbed to the top of the classical charts in much the same way as the earlier surprise hits Gorecki’s Symphony No. 3 and Chant, but without any crossover pandering or trendy packaging.

The central principle of the recording–explained in great detail in an accompanying booklet–is a controversial thesis developed by retired German violin teacher Helga Thoene, who contends that the Ciaconne was composed as a memorial to Bach’s late first wife Maria Barbara and that it is packed with hidden references to death and sorrow.

The basis for that thesis is the fact that Bach nurtured a serious numbers fetish, often encoding his own name and other information within his works through a system of gematric figures. The symbolism of the numerical patterns and the quotations in the chorale feeds Thoene’s passion.

Of course, the beauty of this seemingly far-fetched theory is that Bach’s music is a seamless fabric of undulating sensuality and rich spirituality, never calculated or contrived.

Bay Area audiences will have the opportunity to hear this intriguing treatment in concert on April 22 when Poppen and the Hilliard Ensemble perform at Grace Cathedral in San Francisco during a limited six-city tour.

The 2001-2002 season kicked off last week with a program of English hymns featuring renowned tenor John Aler that included a concert at the Osher Jewish Community Center in San Rafael. On Feb. 2, the orchestra offers a special Jasha Heifitz Birthday Celebration Concert at the Palace of the Legion of Honor in San Francisco.

On May 16-19, music director emeritus Stuart Canin returns for a night of Byrd, Mendelssohn, and Schoenberg. The season concludes June 7 with a major Herbst Theatre bash at which the celebrated conductorless orchestra will be guided by the baton of celebrated conductor Sir Simon Rattle of the Berlin Philharmonic. For schedule details, check www.NCCO.org or call 415.357.1111.