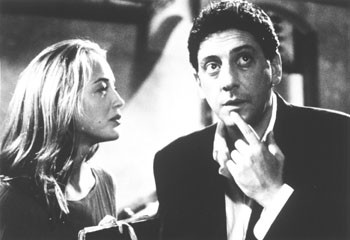 Civilization has has its discontents, and perhaps an edge of slight discontentment arises from watching Jacques Rivette’s comedy Va Savoir. It’s work from an old, wise, and honorable director (Celine and Julie Go Boating, Le Belle Noiseuse), a film in which humanist spirit shines like the morning sun, dispelling all nighttime tangled emotions and love sickness before it. The most violent moment is a slap in the face, and both the woman who strikes and the woman stricken agree that the slap was justice.

I left Va Savoir glad to be alive. So why did it slip through my memory by the next morning?

The title means “Who knows?” or “We’ll see,” and the film is a droll study of the love problems of a group of intellectuals. It begins with the unfixed relationship between Ugo and Camille–perhaps lovers or sleepover friends–who have come to Paris to perform Luigi Pirandello’s As You Desire Me in the original Italian. Ticket sales are poor.

Camille (Jeanne Balibar), who has been away from the French capital for three years, is troubled by the memory of a lost lover. Against her better judgment, she searches for him. He, Pierre (Jacques Bonnaffe), doesn’t look the type to inspire deathless passion; he’s a philosophy graduate struggling with an intractable college thesis: “Heidegger, the Jealous.”

Meanwhile, Ugo (Sergio Castellitto), the director, is distracted by the search for a rare and possibly lost manuscript by Carlo Goldoni, the Molière of Italy. One small private library is administered by a scatterbrained old mother (Catherine Rouvel) and her lovely daughter, Do (Hélène de Fougerolles).

As in a Howard Hawks movie, Do puts the moves on Ugo in no time, using the directness of her gaze, the richness of her smile, and some enchanting double talk (she’s a student of fibulas, ancient Roman safety pins). Her ratty but sexy half brother (Bruno Todeschini) hovers around the side.

The divided Camille is reflected in her onstage and offstage lives: Onstage, she is called the “Unknown,” “a body without a name” who slinks through the Pirandello play, with the Modigliani colors of the set behind her; offstage, she’s resourceful yet helpless, at one point dressed in a spaghetti-strapped black number, come to play a jewel thief (Rivette adds a stolen diamond ring to the tale).

Va Savoir is almost everything a romance ought to be: It’s not some leaden tale of destiny, but a capricious, reasonable tale of playtime, with happy chance and happier choice. Though it’s more than two hours long, watching it was like watching The Children of Paradise–it could easily have gone on for a couple hours more.

But I’m troubled as to why it seems so slight. Perhaps I can attribute it to the lack of tang in the film’s undertone: Tragedy needs comic relief; does it work the other way around, too?